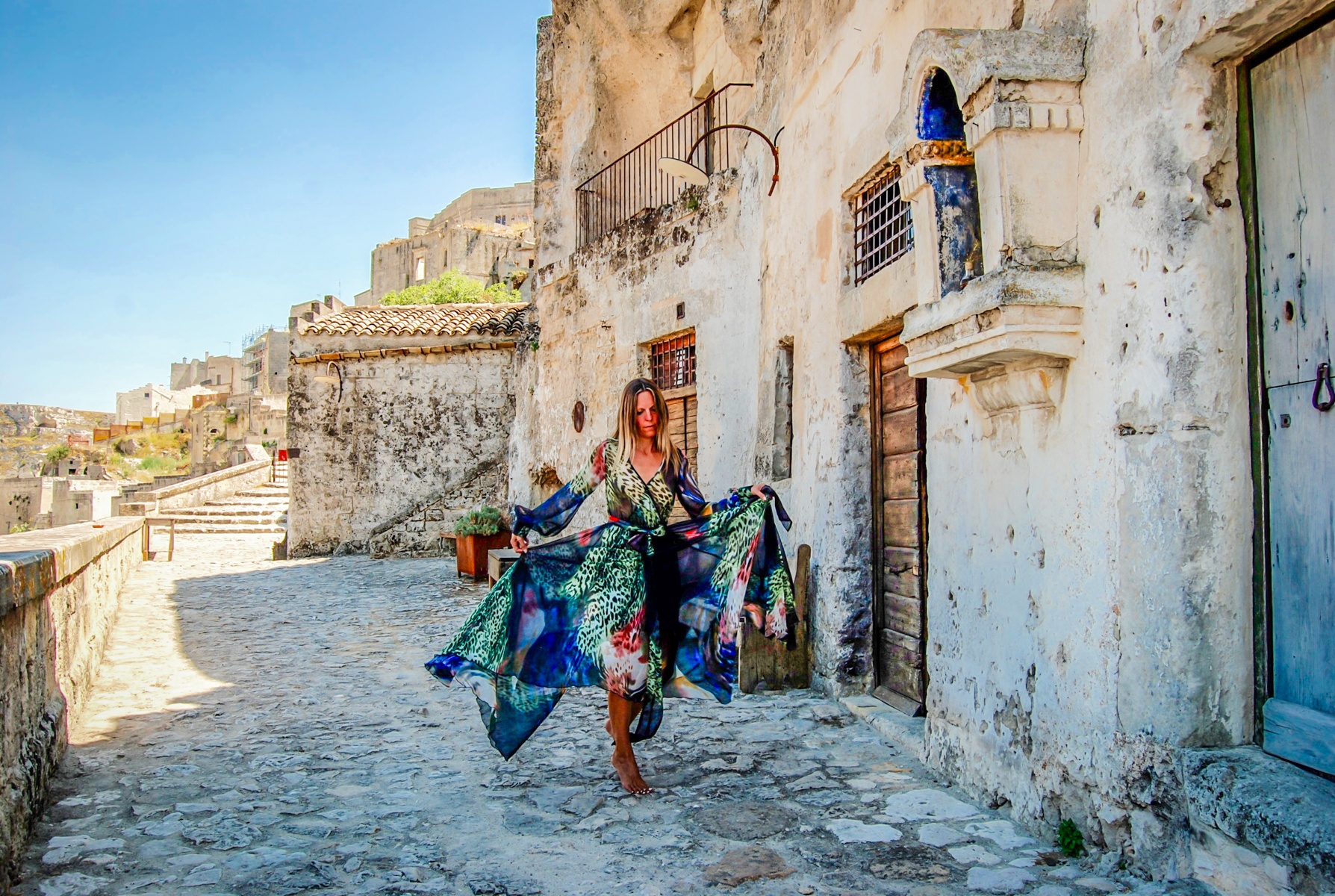 My first day in Matera, Italy, I wandered the narrow cobbled streets in awe.  Awe of the in-tact history, the charm, the quiet, the unspoiled town, and the authentic Italian moments I witnessed on the streets. I felt at ease, welcomed into the past with an invitation to get lost here.  It came as no surprise to me to learn that Daniele Kihlgren discovered what is now Sextantio Le Grotte Della Civita in the same way. He got lost on the dirt roads around a Medieval castle, the Rocca Calascio. By chance he found a road that led up to Campo Imperatore, a plateau located Southeast of the Gran Sasso massif. From here he could see something he had spent years looking for, “castle hamlets perched on hilltops, surrounded by agrarian countryside,” unspoiled and perfectly preserved. Here, in his sights, time had stopped and the past of an ancient time was preserved without the influence or imposition of the Twentieth Century. 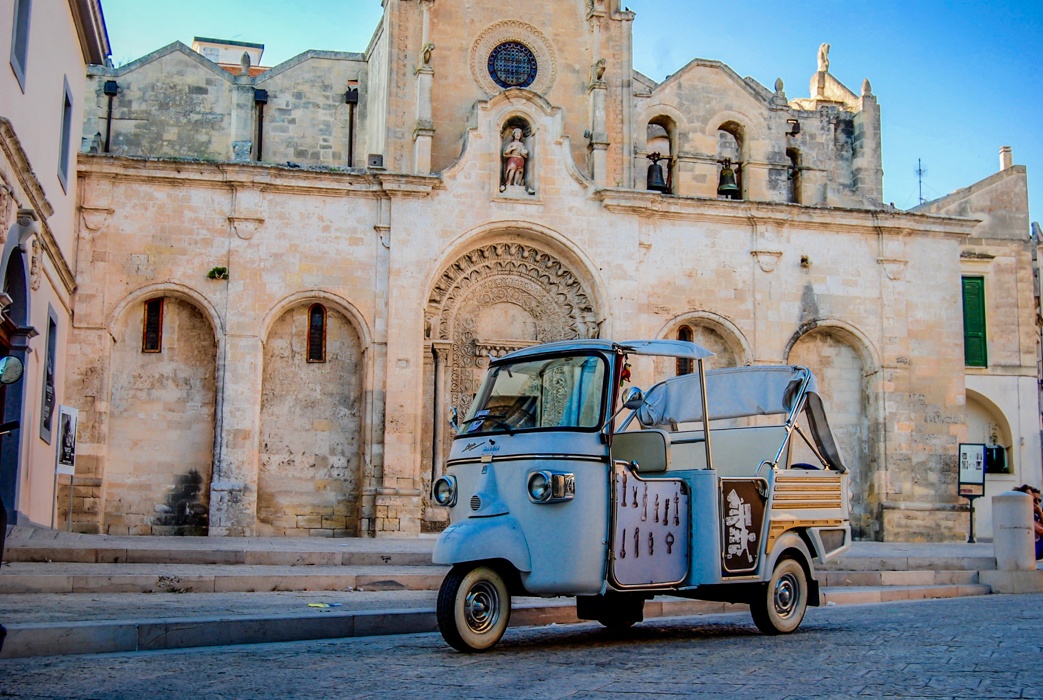 Matera in Italy offers an enchanting experience around every corner. Image © Pat Bailey

In an essay that he wrote about his project, Daniele said, “Sometimes a new business flourishes out of the desire to establish a cultural project.” He returned home and began to immediately formulate a plan to breathe life and soul back into this ancient place (Matera is the only place in the whole world where people can say that they are still living in the same houses of their ancestors from 9,000 years ago). His vision for repurposing this land was calculated, and the project was inspired ultimately by the traces of life in the decayed dwellings of this preserved town. Paradoxically, he was romanced by an area with a sordid history of cave dwellers and an area known as “the embarrassment of Italy” which I learned about from Marienza a fifth generation Materani now working at Daniele’s project Sextantio.

The “Sassi” are houses dug into the calcarenitic rock, they are caves. Until the 50’s Marienza’s family, and a big portion of Matera’s population, lived in these caves; with their large families, co-habituating with farm animals. Malaria and unhealthy living conditions prompted the Italian government to forcefully relocate most of the population of the Sassi to the developing modern part of Matera. The caves were abandoned, as-is, and to a passionate visionary like Daniele Kihlgren, they offer the perfect opportunity to create a “hotel diffused,” or Albergo Diffuso.

Sextantio Albergo Diffuso is an exquisite expression of one man’s vision for conserving the past in a respectful and artful way. The identity, heritage, and integrity of the Sassi has been maintained, while seamlessly repurposing the space and land for a modern purpose. Kihlgren’s heart and soul lives in every part of this property, and the magic of a time long ago is not lost, but newly discovered when you step into your cave room here at Sextantio. 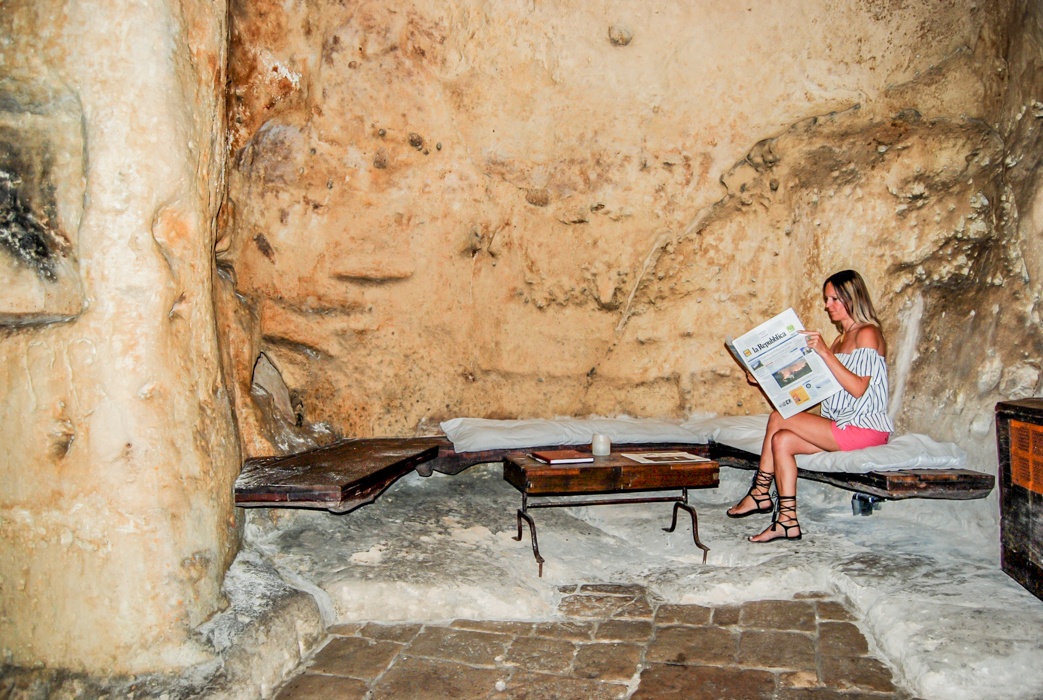 There is nothing quite like the gorgeous cave rooms at Sextantio Matera. A truly unique and special stay. Image © Pat Bailey

You can easily find yourself in this ancient town by flying directly into Bari Airport and taking the train one hour to the centre of Matera. Sextantio is located five minutes from the train station by cab, you’ll want to take a cab and wear comfortable walking shoes because the streets are cobbled and there are many steps along the way.

There are 18 cave rooms on the property of Sextantio. Each cave room has been masterfully conserved, with minimal disruption to the original spaces, but rather creative reuse of the existing space. According to Kihlgren, “we tried to capture the more ancestral sense, the deeper emotions, intimate harmonies, and the subliminal feelings this place communicated – enveloped in the heart of the mountain and surrounded by the total presence of the limestone: hard, pure, incorruptible, eternal, ascetic.” 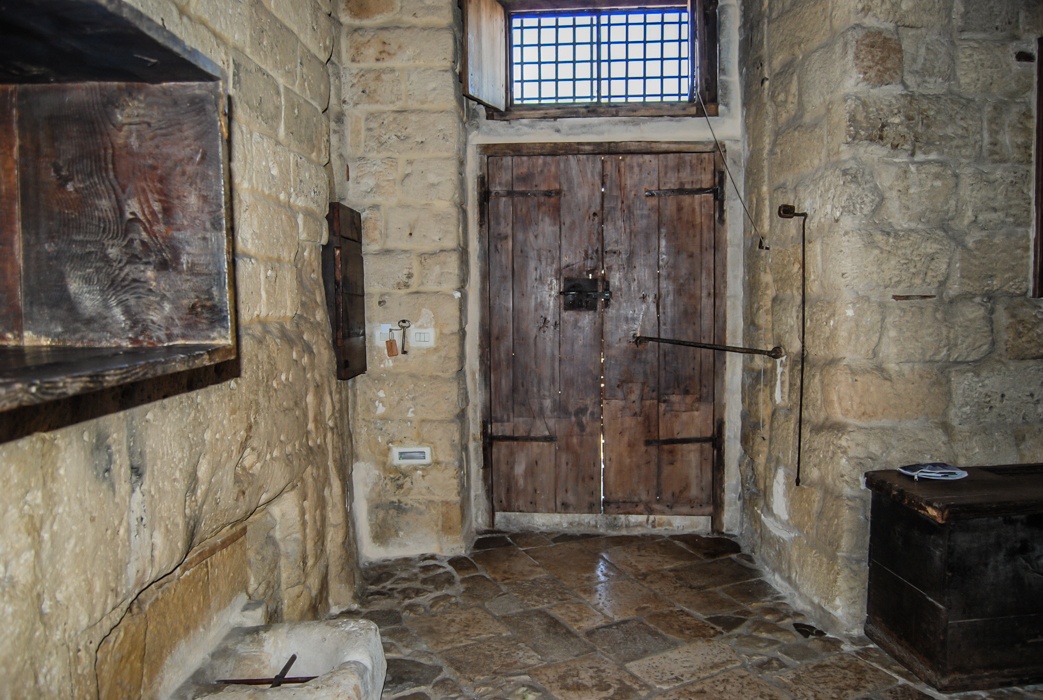 My cave, number 8, was situated on the first of three levels with a panoramic view of the most ancient Sassi area facing Murgia National Park.  It felt like a fairytale, complete with a picturesque backdrop of Basilicata brilliance.

The temperature outside, typical in July, was 100 degrees and when I stepped into my cave room the temperature was absolute perfection. This is partly due to the natural conditions of the Sassi, but also because of the modern addition of central air conditioning, one of the many careful additions that make the Sextantio extra special.

Every stone was returned to its original place after adding the underground heating to heat the floors for winter in Matera, the furnishings were carefully chosen after detailed study and research of local artisan workshops, remaining cultural materials were used to inspire every detail. All of this seamlessly married as the space is repurposed with modern aspects that do not compete but rather fade into the backdrop of the overwhelmingly historical and unique space. 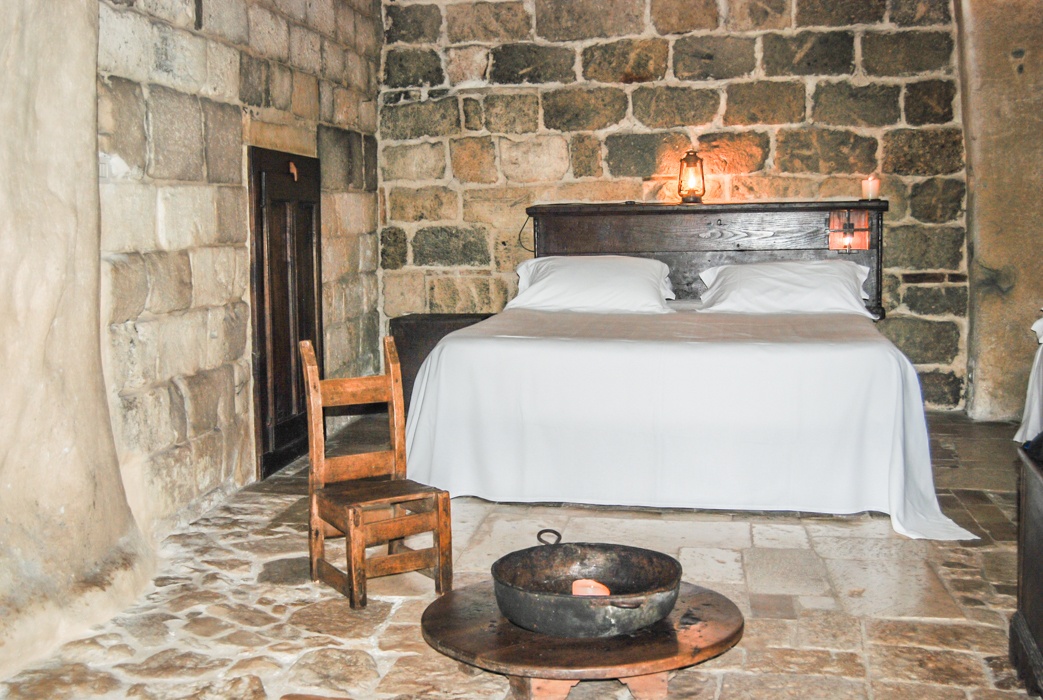 The aesthetic at Sextantio Matera showcases the beautiful natural features of the building itself while offering all the luxuries you could want. Image © Pat Bailey 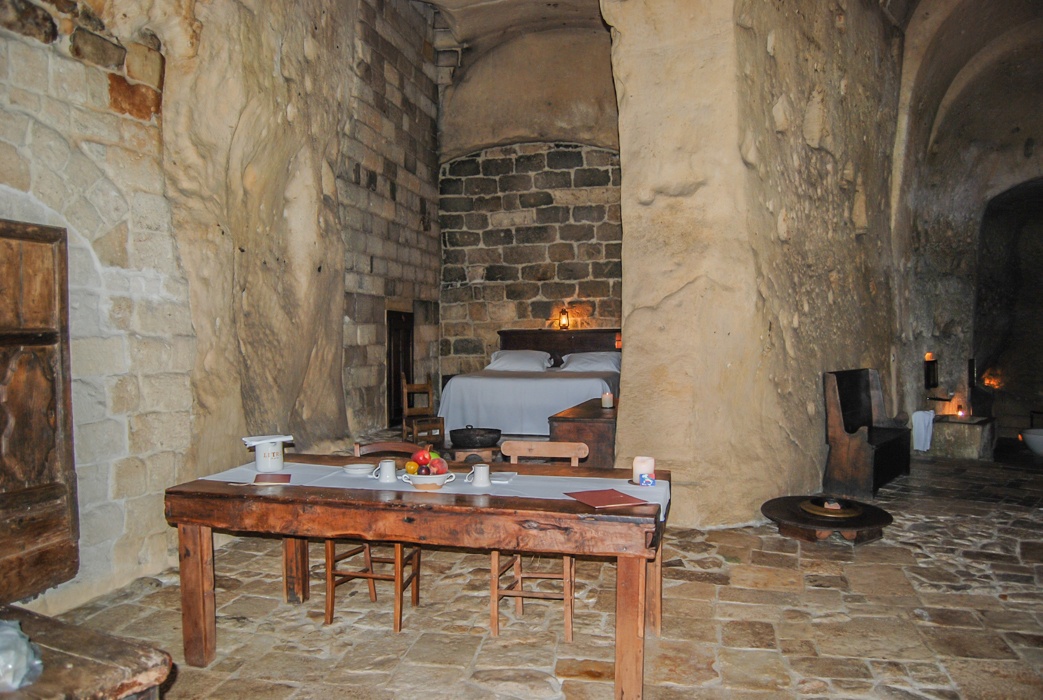 The natural curves of the cave walls carve up the space in our room at Sextantio Matera. Image © Pat Bailey 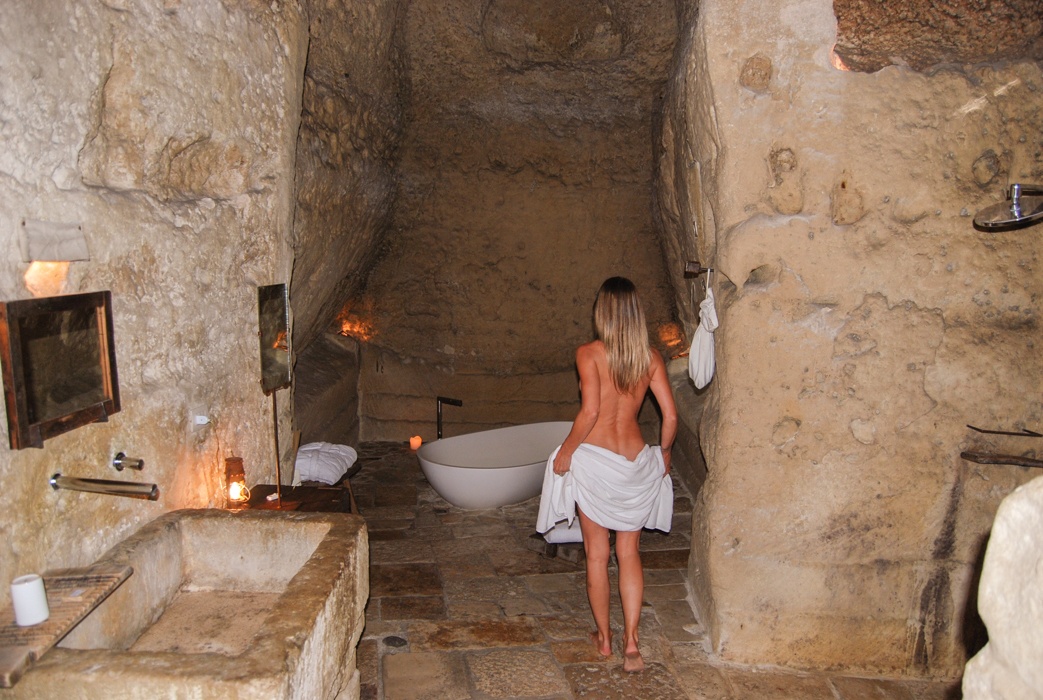 The open bathroom is one of the stand out features of the stunning and romantic space at Sextantio Matera. Image © Pat Bailey

A hearty breakfast accompanies your stay at Sextantio. The casual feast includes: pastry and traditional breads of the region, fruit, cereal, lots of cheese, meat and local specialties and fresh fruit and vegetables.  “Caffe” the Matera way or Americano with a view that seems and feels too good to be true is how you start each day here. The dining room was once a XIII Century church and the buffet, in its own little cave room is the original altar. It is unique and gives new meaning to word “hearth,” as you feel very much like you are experiencing the heart of the property when you are here.

Every afternoon, on the terrace just outside of the dining room, guests can enjoy an Italian Aperitif with local wines, herbal and black teas, and typical southern snacks including the local “taralli” which are yummy round bread sticks. Tables are set with fresh flowers, candles and a view of the Murgia Park that you will never forget. 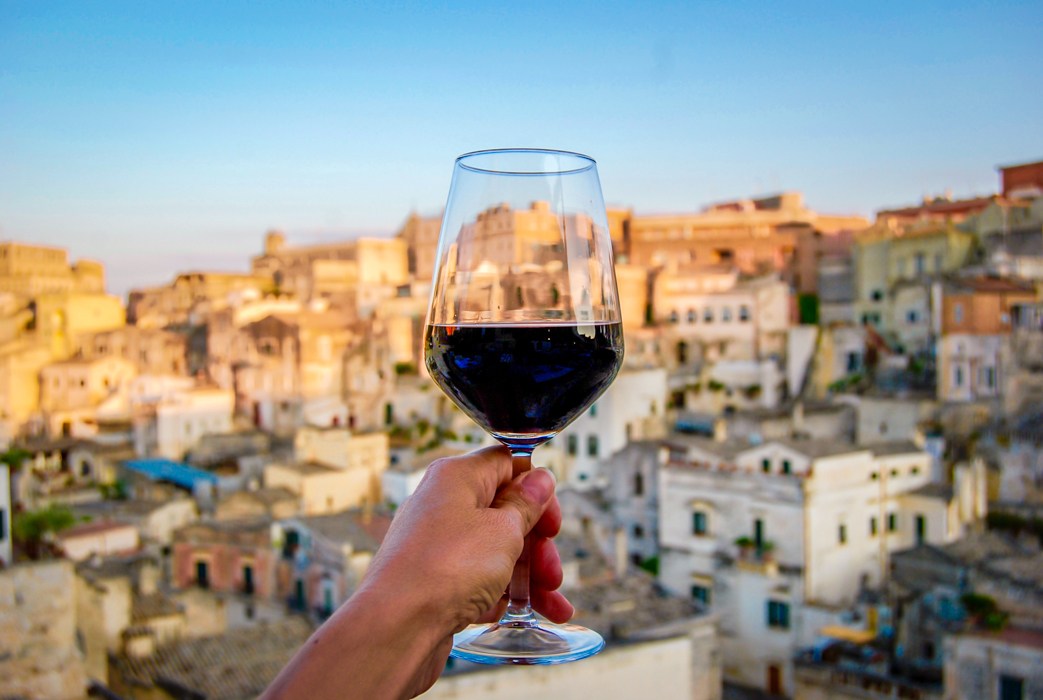 An aperitif overlooking Murgia Park at sunset is a must at Sextantio Matera, Italy. Image © Pat Bailey

Getting Lost in Magical Matera

There is plenty to do in and near Matera, lots of guided tours of the town and surrounding areas.  I chose to wander the narrow streets on my own – without a map, and I enjoyed getting “lost” in time and in this ancient place that has memories of its past around every corner and down every alley. Matera is a safe place to explore for solo travellers and it inspires you to be curious and to wander without a plan. I found many terrace restaurants with incredible views and feasted on Cavatelli and the “House Wine” which was poured from a bottle with no label, and some of the most delicious red wine I have ever tasted.

If you want to be guided, you can enjoy these tours which the concierge at Sextantino can arrange for you:  Bread and Mozzarella tour around town, Matera 3 hour Cycling Tour, Magna Crecia Archeological Tour, La Via Dei Calanchi which is a trip to the enchanting lunar landscape in undiscovered Basilicata including the abandoned village of Craco, the Rabatana in Tursi, a X century village, Venosa and the Wine Cellars, a journey to the Lucanian Dolomites, and many other unique tours of surrounding villages and historical sites. 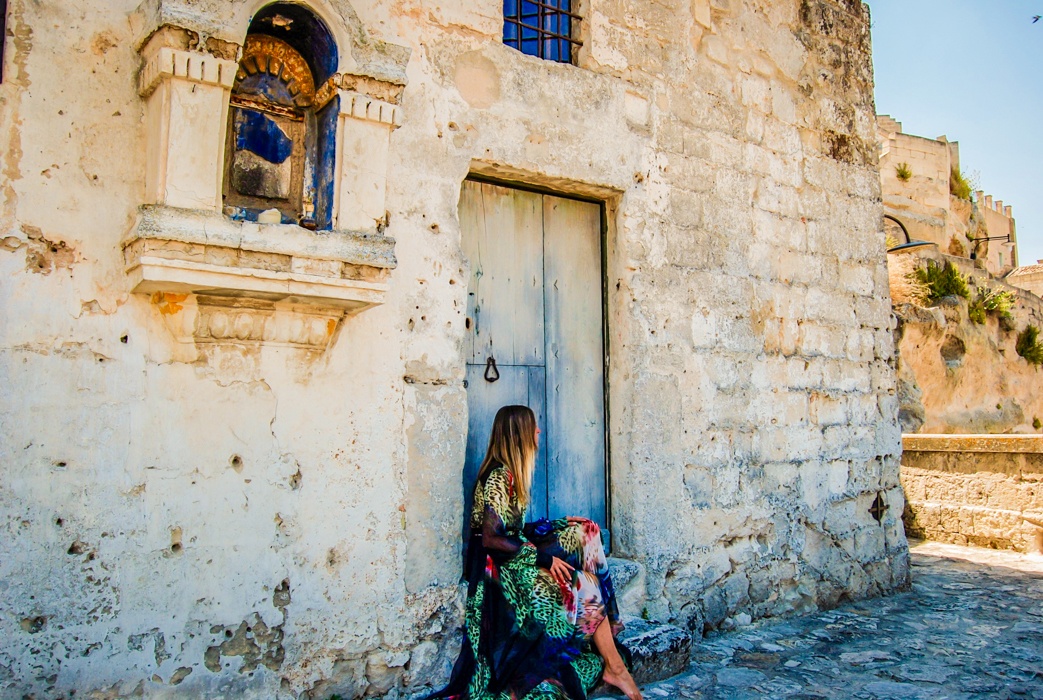 Matera is a magical city that inspires you to get lost wandering its stunning history-rich streets. A must in Italy. Image © Pat Bailey

The Fit Traveller was a guest of Sextantio Le Grotte Della Civita for this stay. As always, the opinions, words and images are authentically our own. 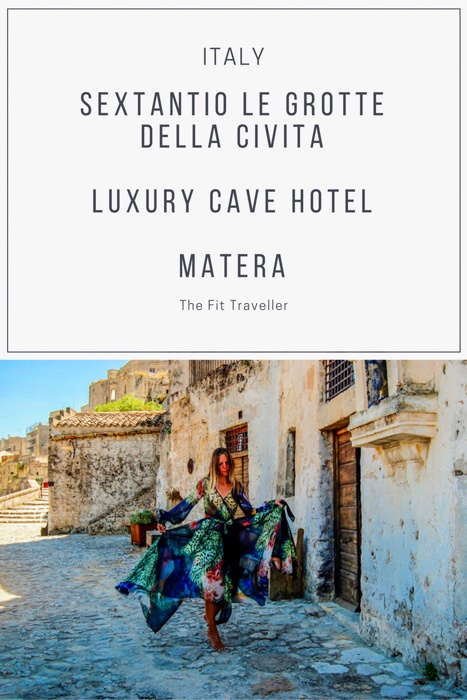 Pat Bailey is a certified Bhakti Yoga Teacher, published poet, writer and entrepreneur with a passion for exploring the globe. Pat is also the founder of The Hell Yes Life, where she has created her own branding academy helping to elevate brands and students through authentic and intuitive coaching.

« What to Know and Things to do in Salt Lake City, Utah
Is Sumba Island Indonesia’s Best Kept Secret? »