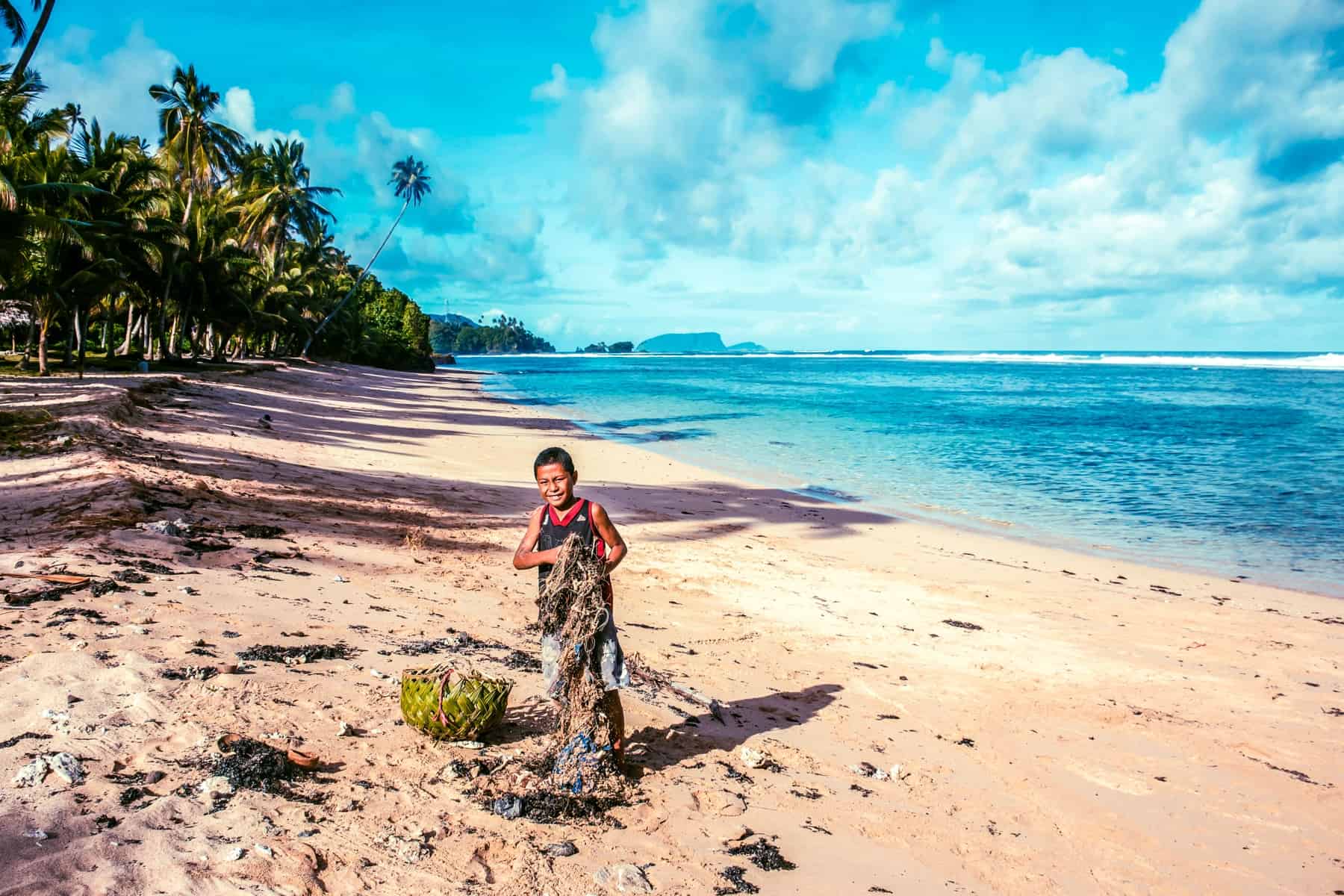 Luscious, verdant, wild yet serene, Samoa is a treasure trove of untouched natural beauty, where turquoise seas meet rolling mountainscapes and an emerald carpet of rich vegetation greets you at every turn. Mention that you’re visiting Samoa on your holidays and you’re likely to be met with confusion and curiosity. Because unlike its South Pacific neighbour Fiji, Samoa is a country less frequented by the West. That’s absolutely why you must make it your next vacation stop. Here are just a few things to do in Samoa to inspire you to add this idyllic destination to your list, before the crowds catch on. 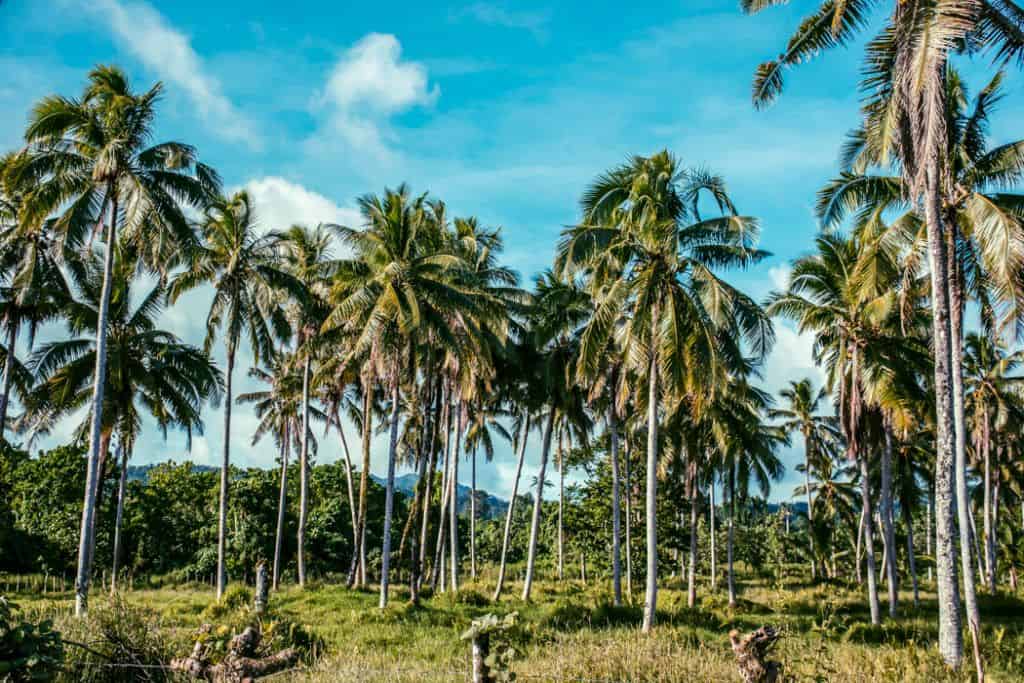 Part of the appeal of visiting an underdeveloped country is that its infrastructure is developed enough to be able to welcome visitors, but without the rampant tourism you see across other French Polynesia locations. Outside of Apia, the only town on the island, you’ll find tribes living the simple life in mud huts with open sides, their pigs and goats roaming free and a stall selling coconuts perched precariously on the roadside. The villagers have few belongings, but they aren’t in poverty. As a local woman explained it to us, work comes low down on the priority list for Samoans – family, community and the Church are the pillars on which they build their livelihoods. Before you begin exploring, get to know the unique customs and etiquette of the Samoan culture; check whether there is a curfew or fee associated with the place you plan to visit and dress appropriately. 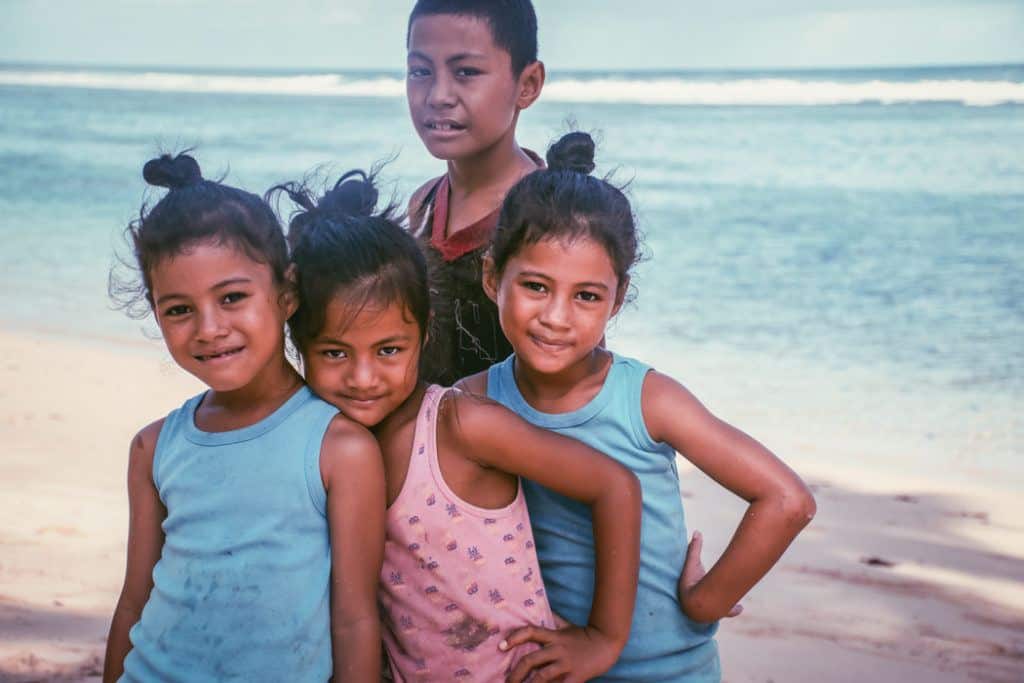 Be respectful: Beautiful local children pose for the camera, with permission. | © Lauren Hockey

When it comes to getting around Samoa, riding the colourful public bus is a fun way to experience local life. However, renting a car in Apia will give you the freedom to explore further, just ensure you have enough fuel, as petrol stations can be scarce.

There is a Samoa Tourism Information fale (a traditional thatched hut) on Beach Road, should you need a map or some local advice with you arrive in Apia.

Related: Exploring Rarotonga: The Heart of the Cook Islands 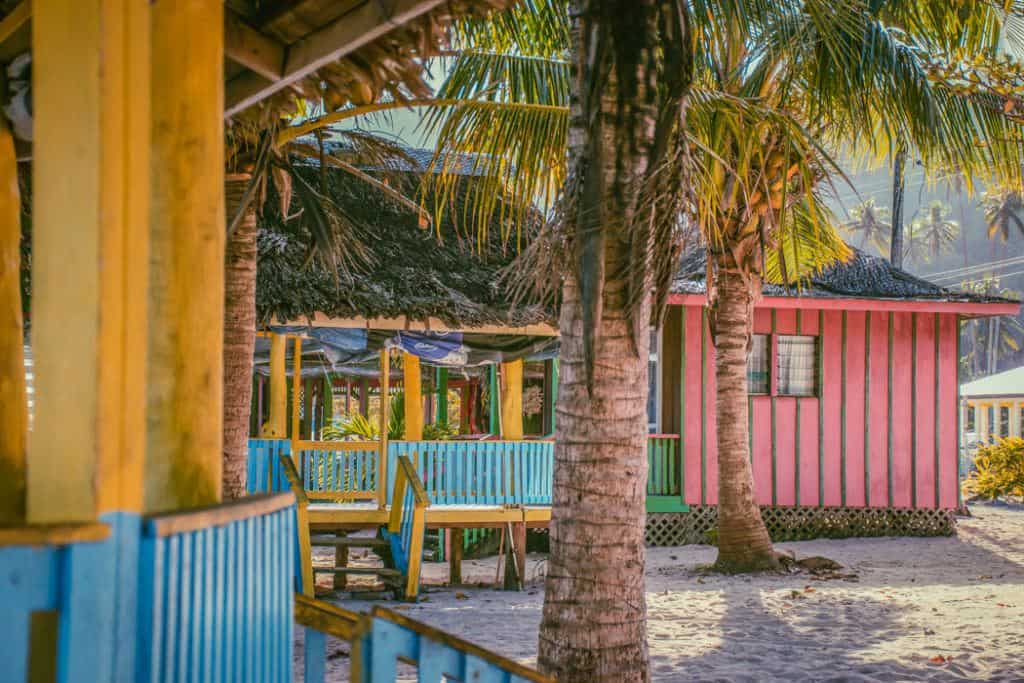 Samoa isn’t just the spot to find a 5-star luxury resort, but you will also encounter lodgings with local charm. | © Lauren Hockey

Where to Stay in Samoa

Upolu island is the gateway to Samoa and Apia the capital. While there are a number of beautiful beachside resorts in Upolu, we counted just three along the entire South Coast Road, and even then they are less like the luxury resorts you might find in other island tourist destinations and are more likely to be small can Pacific-style buildings rather than high-rise complexes. 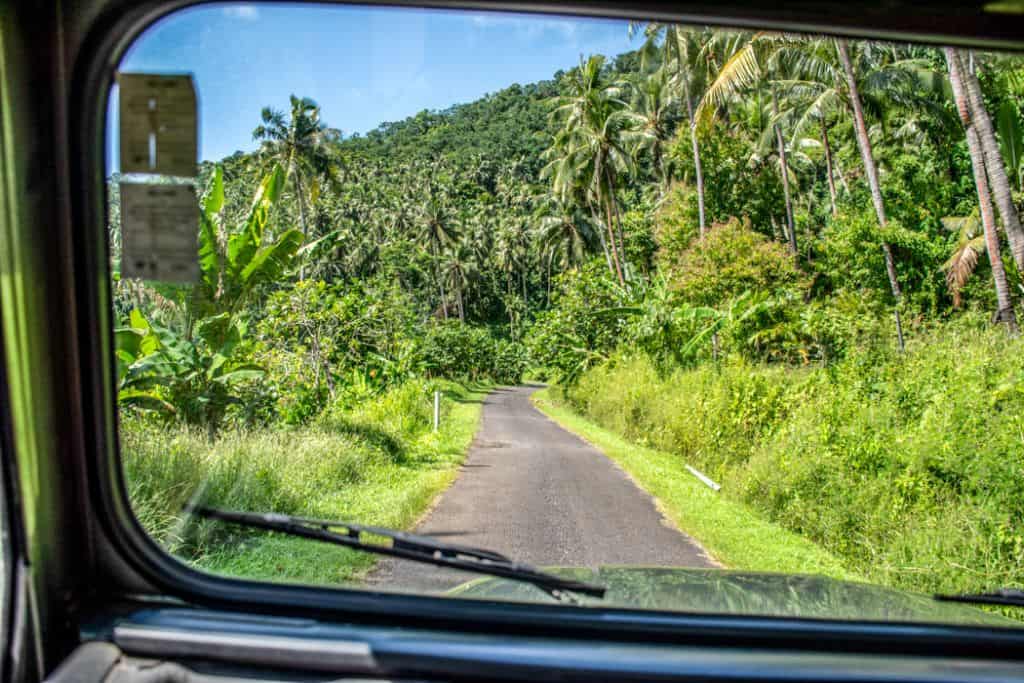 Weaving along the island roads enveloped in green in breathtaking Samoa.| © Lauren Hockey

Things to Do in Samoa

What you absolutely will find in Samoa is intense natural beauty at every turn; where iridescent seas meet rolling hills and mountains and an emerald carpet of luscious and rich vegetation greets you as far as the eye can see. If you need any more convincing, here are some of the top reasons to visit this South Pacific gem; just a a few of the incredible things to do in Samoa. 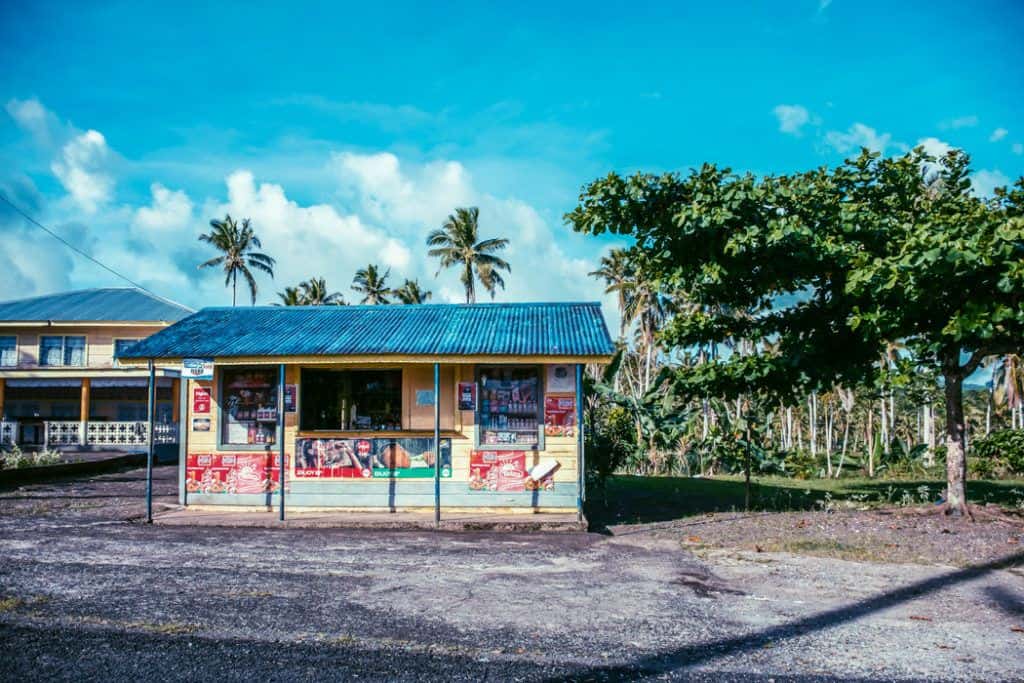 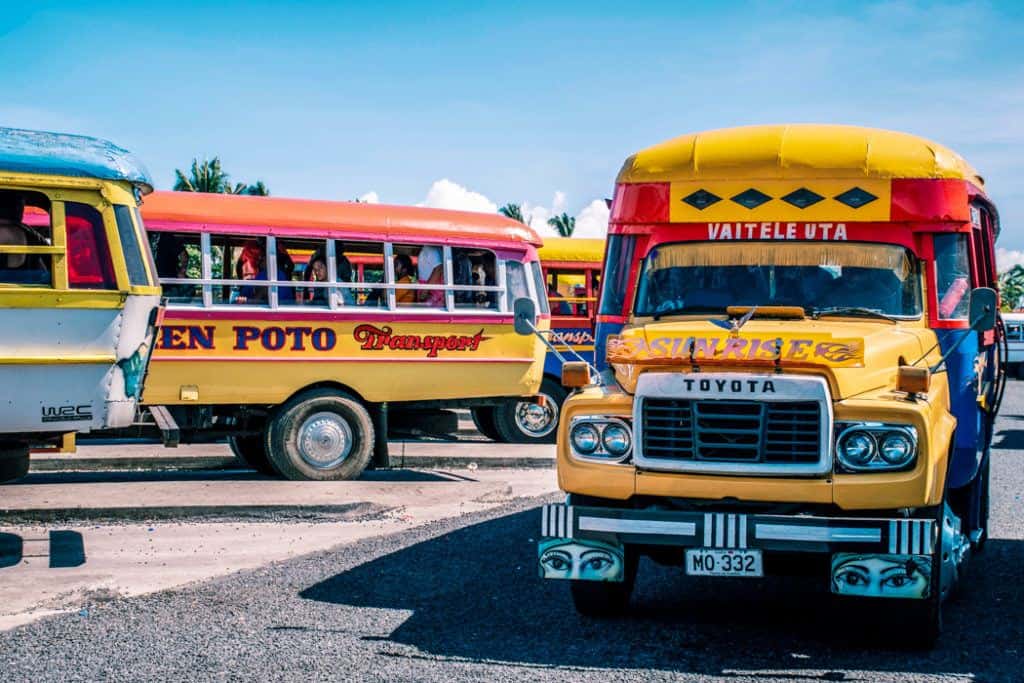 Riding the local bus is part of the adventure in Samoa. | © Lauren Hockey

The To Sua Ocean Trench is the jewel in Samoa’s tourism crown, and it’s easy to see why. This extraordinary swimming hole is the result of a lava eruption causing the land around it to slip away, leaving two large holes connected by a lava tube cave. The bigger of the two is To Sua, and what a mesmerising and magical swimming spot it is.

Set in well-maintained (and managed) gardens, you can make a day trip out of visiting To Sua, setting up in one of the beach fales (traditional wooden beach huts) that border the trench and overlook the ocean. The trench itself is an other-worldly experience – with warm, crystal clear water, you’ll gaze up into the cavernous crater fringed by mossy vegetation and strands of ivy that glisten in the dappled sunlight and pinch yourself. It’s certainly an experience that you won’t be forgetting in a hurry.

If heights aren’t your thing but you still want to cool off, try the Piula Cave Pools, a freshwater oasis on the grounds of the theological college. The water is crystal clear, and although cooler than saltwater, is still a refreshing break from the island humidity. The water flows into a cave a few metres long – swim into the darkness if you dare! 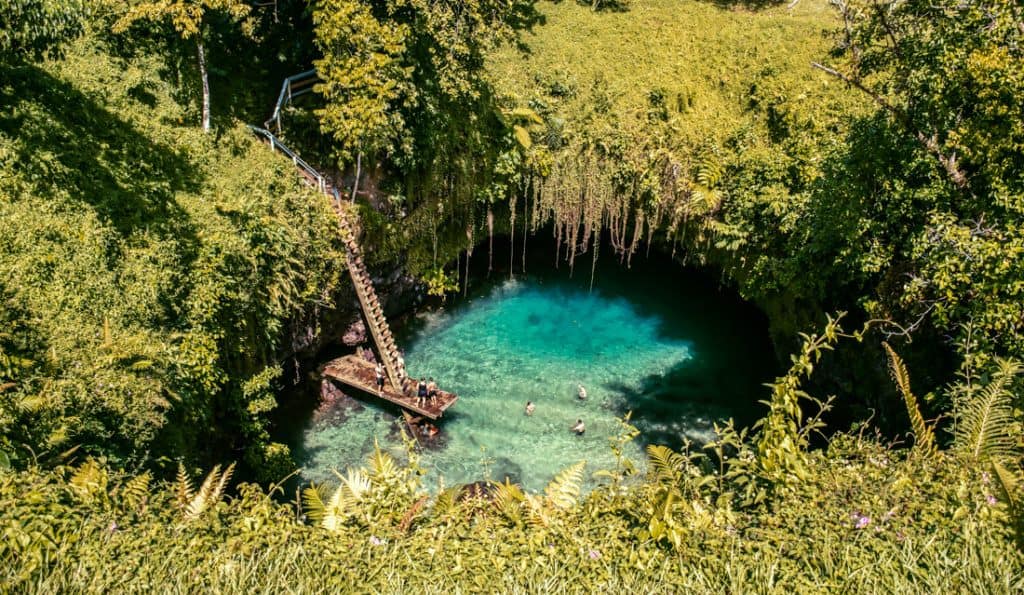 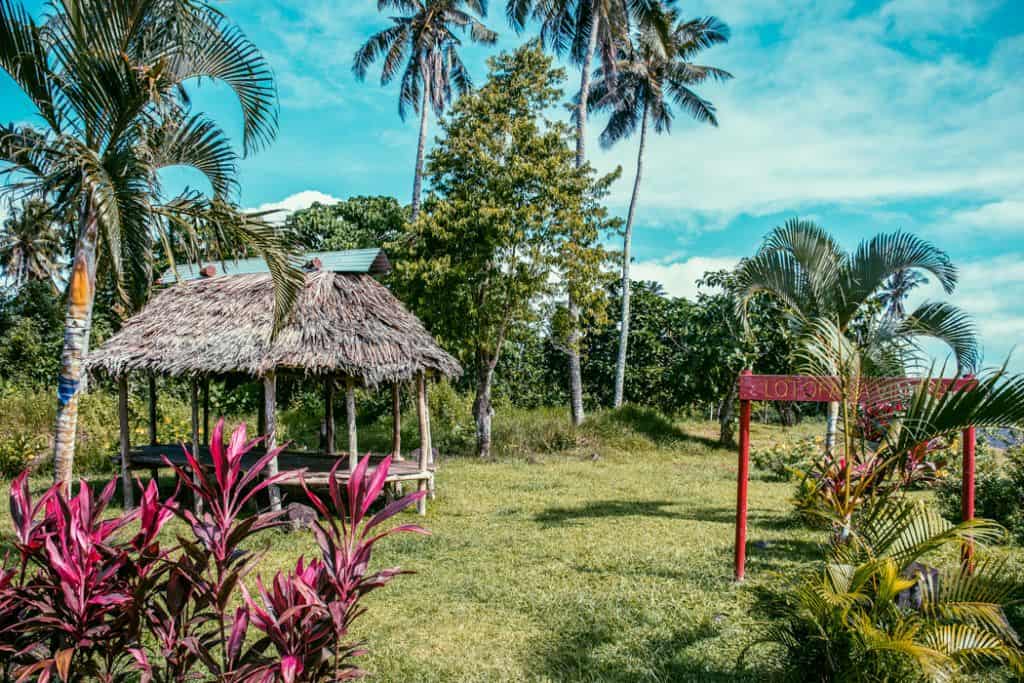 You’ll find traditional beach fales at every turn, the perfect respite from the sun. | © Lauren Hockey

Relax on a Beach all by Yourself

It’s true there isn’t a bad beach on Upolu, but make a special trip to Vavau. Once a bustling tourist resort, Vavau remains deserted since the 2009 tsunami tore down much of the infrastructure and now only palm trees and a few beach fales remain.

Set to the backdrop of volcanic rock and luscious vegetation, Vavau is one of those beaches that has to be seen to be believed.

Aganoa, also known as Black Sand Beach, is another hidden gem. This beach is only accessible down a 3km gravel track, which is undulating in places and only suitable for 4WD vehicles. As is the case for accessing all beaches in Samoa, you pay the Chief your fee ($10WST per person (about $AUD5.50/$USD3.80) in the village before embarking on your off-road journey to find a beach that is deserted, pristine and devastatingly beautiful.

This beach reminded me a lot of the vast expanse that is Cape Tribulation in Far North Queensland, Australia (only minus the threat of hungry crocs) with dense vegetation bordering the beach and fringed with majestic palm trees that soar high into the sky. The whole of Upolu is protected by a reef making swimming here safe and enjoyable, but do watch out for currents and a break at this beach. If you’re a strong swimmer, take your snorkel, as we later read that snorkelling at this spot is out of this world.

Related: Indonesia: Photos to Inspire You to Travel Beyond Bali 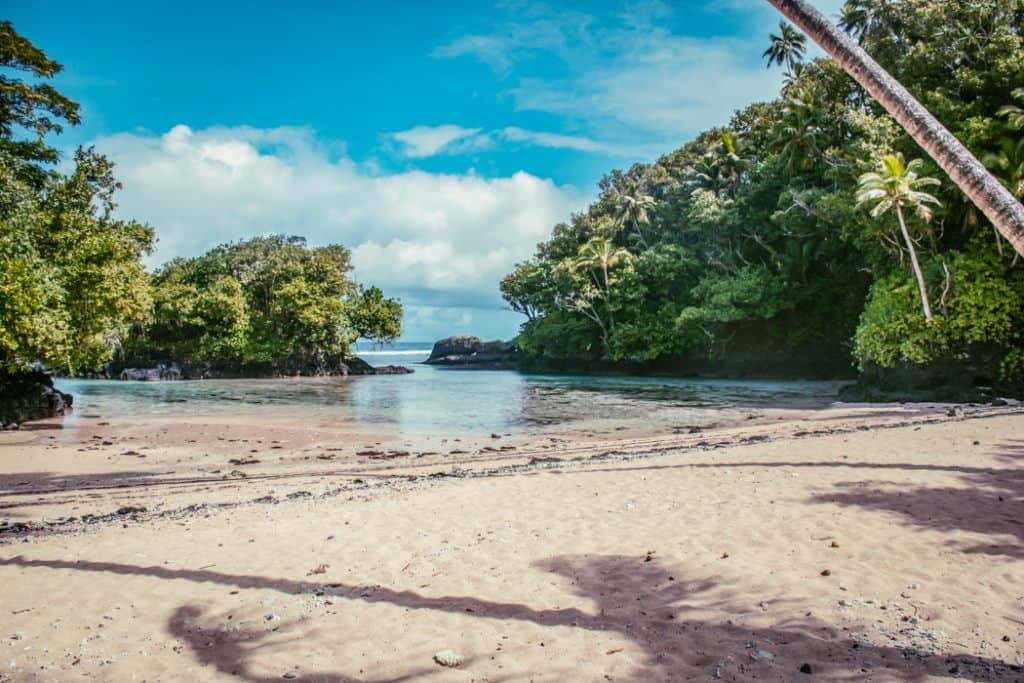 You could find yourself with a stretch of sand all of your own in Samoa. | © Lauren Hockey 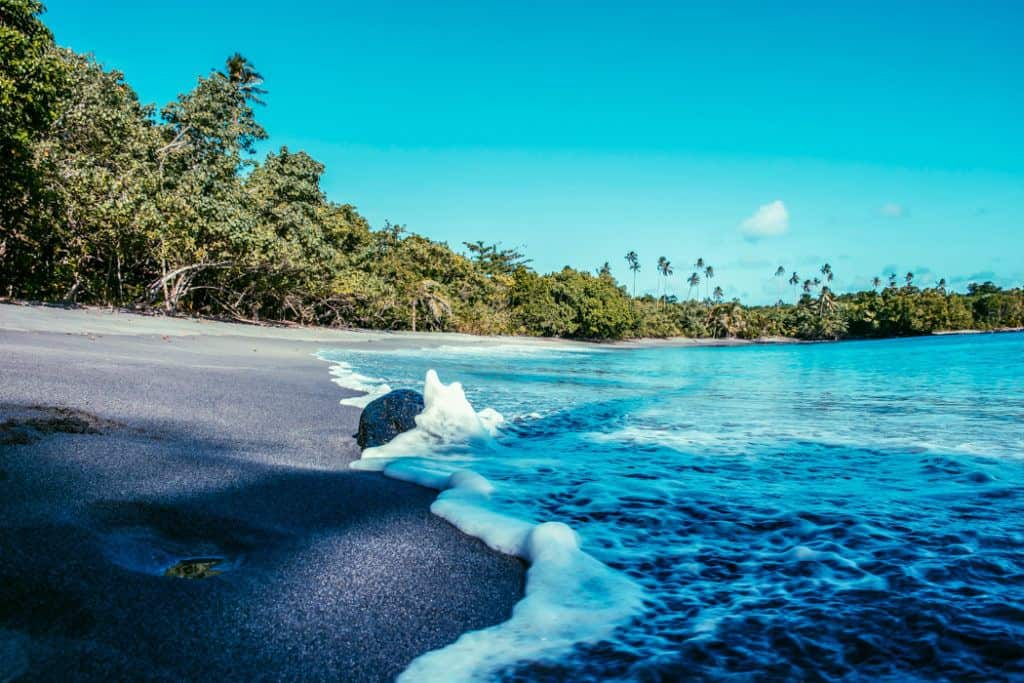 It’s true that neighbouring Fiji is often ranked one of the happiest countries on earth, and certainly, the people of the South Pacific have generosity in spades. Traversing the island by car, you’ll pass many a hard-working Samoan, all who will raise their hand in greeting and smile broadly. English is widely spoken by most in the more built-up areas, and the service we encountered whilst dining out was outstanding.

Interactions with the locals is also special. At Vavau, we were the only tourists on the beach, sunbathing to the backdrop of quiet labour as a local tribe built a new fale. A few steps away a mother and her brood of children were busy foraging for food, with the children all too happy to pose for a photo, giggling and jostling for the spotlight as soon as I trained my lens on them.

As a gesture of goodwill, I offered some coins to the family and asked permission before taking a photo. Tipping is not widespread in Samoa, but appreciated by tribes when taking photos or interacting with them on their land. 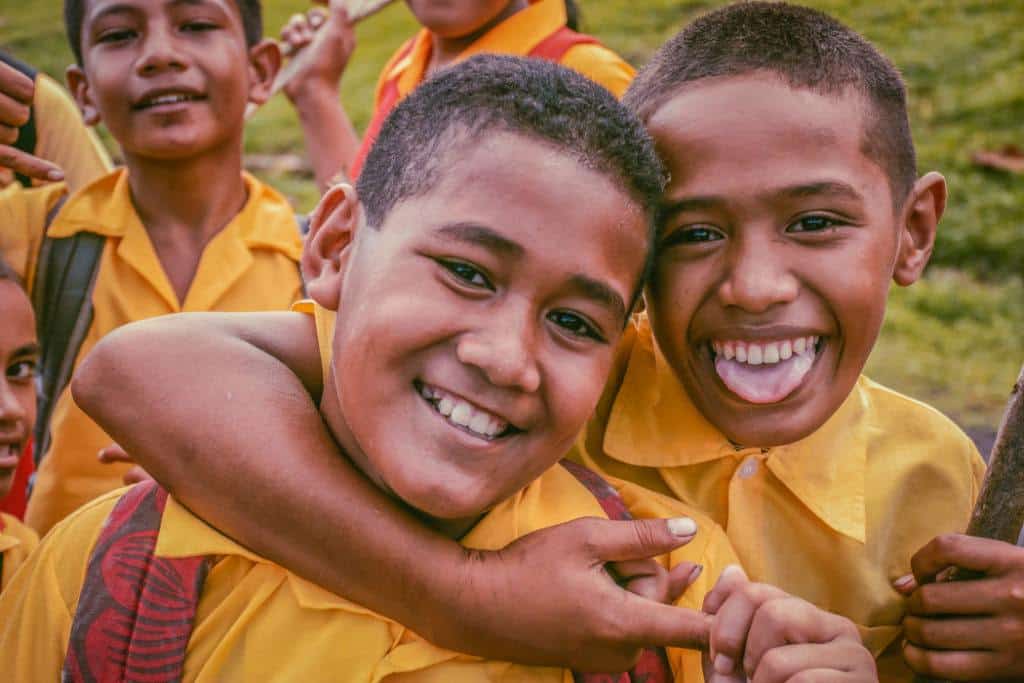 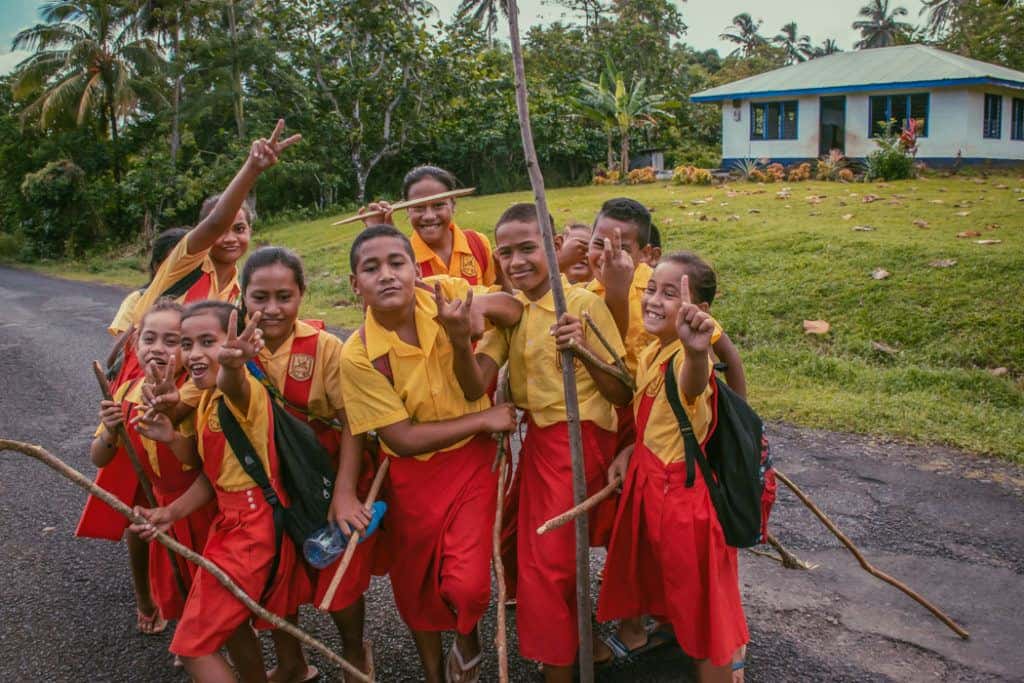 All smiles from the friendly locals in Samoa.| © Lauren Hockey 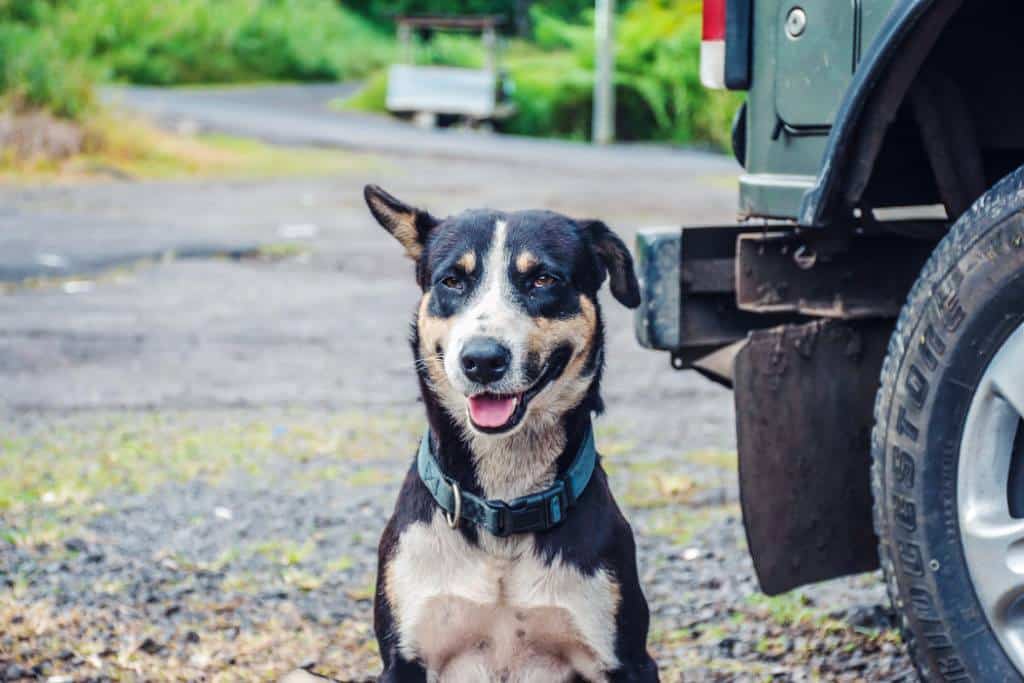 The Diving and Snorkelling in Samoa is World-Class

Samoa is one of the most unexplored places on earth for diving and snorkelling, and yet one of the most biologically diverse. Turtles, manta rays, eagle rays and fish of all shapes and colours are plentiful when underwater in Samoa.

We spent the day diving with Samoa Dive & Snorkel and can’t recommend them enough. Justin and Ty have 20 years of experience between them and are professional, reassuring (for a first-time diver over here) and more than willing to share their vast local knowledge about the island. Their philosophy is centred around taking their clients to the spots not frequented by tourists, and the resulting day trip means you’ll find yourself the only people deep in the heart of the Samoan jungle, using a dive weight to crack open your coconut at morning tea before sinking into the warm and crystal clear water to begin your day of diving.

If you’re going to spend time underwater in Samoa, these guys should be your only choice. In fact, they’re rated number one for diving by TripAdvisor in the whole of Samoa, and the only operator to hold a PADI 5 star rating.

With regular flights arriving in Apia, incredible landscapes, welcoming people and so many adventurous things to do in Samoa, it’s time to push this South Pacific gem to the top of your must-travel list.

Related: Things to do in the Whitsundays, Australia 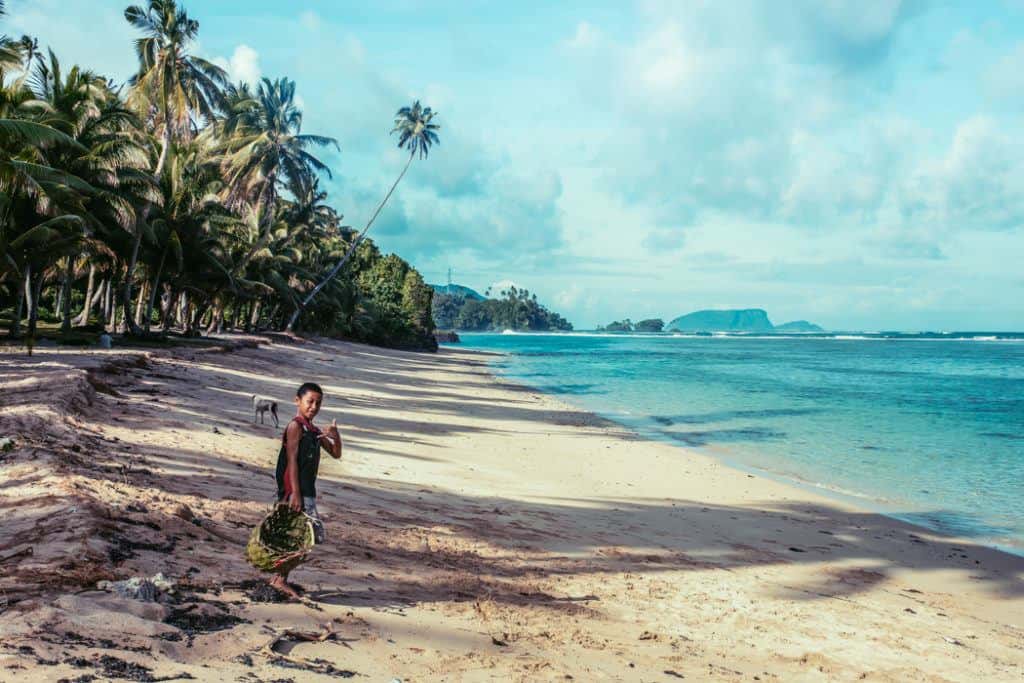 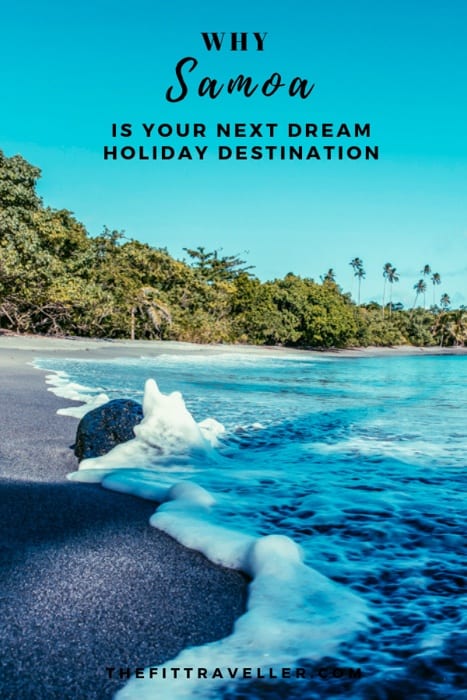 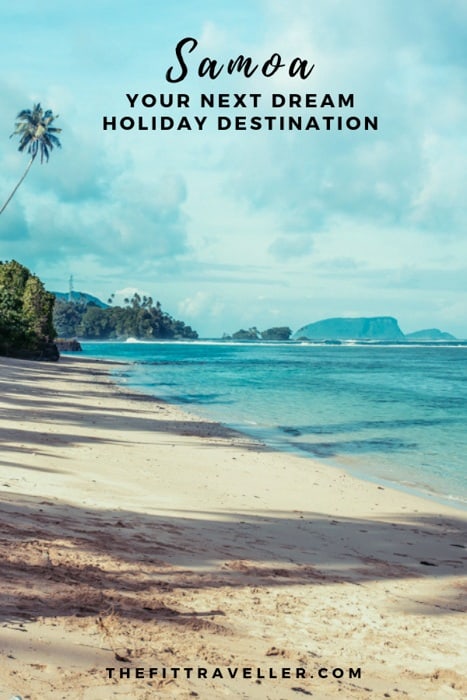 Lauren is a UK to Sydney expat and is inspired by the great outdoors, adventures, good food and telling stories through words and beautiful visuals.