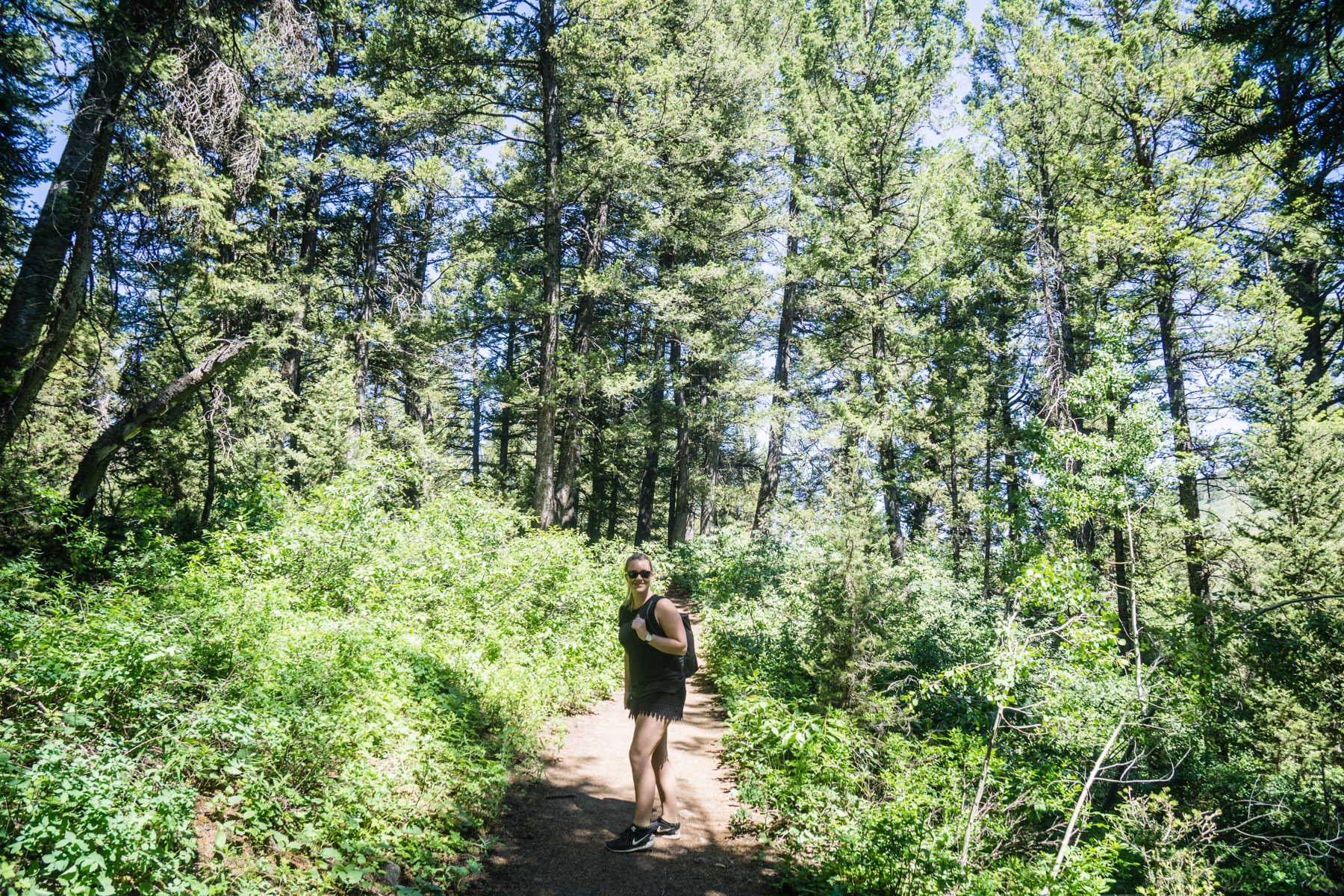 There are many things I have come to learn during four years of living in the United States; avoid drinking the coffee at pretty much all establishments, most Americans will think you are British and the only way to see the country is by hitting the road. That was exactly how we saw incredible Northern Utah with an epic Utah road trip. Utah is almost two states in itself. The south, known for the red rocks of Mighty Five. The North, well known for its Salt Lake City winters. Let me tell you, those only flying north for their winter sojourns, are missing out. Northern Utah is not just a winter paradise as it is commonly known but also an adventure land in summer. Head north for fresh air, dry heat, and lush green scenery from Salt Lake City to Ogden, Park City and Bear Lake Utah. 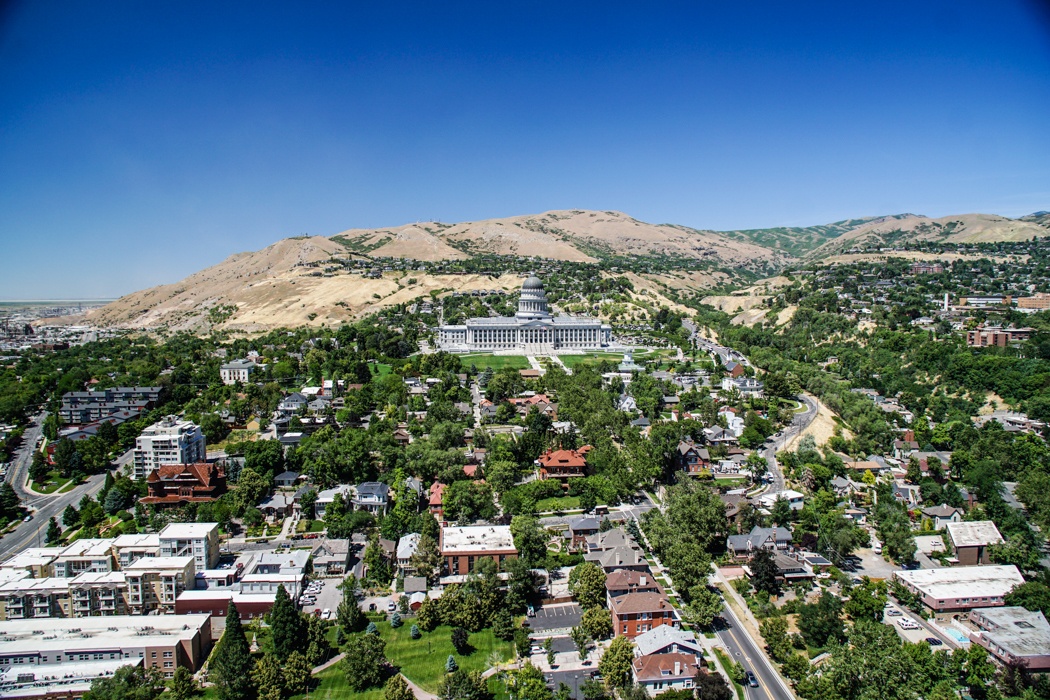 We began a six-day Utah road trip from Salt Lake City, a city which is often overshadowed by the stigma of Mormons. Stigma is mainly what it is. Mormons are very friendly people and you will also have no problem finding a drink anywhere in the city as many may tell you. 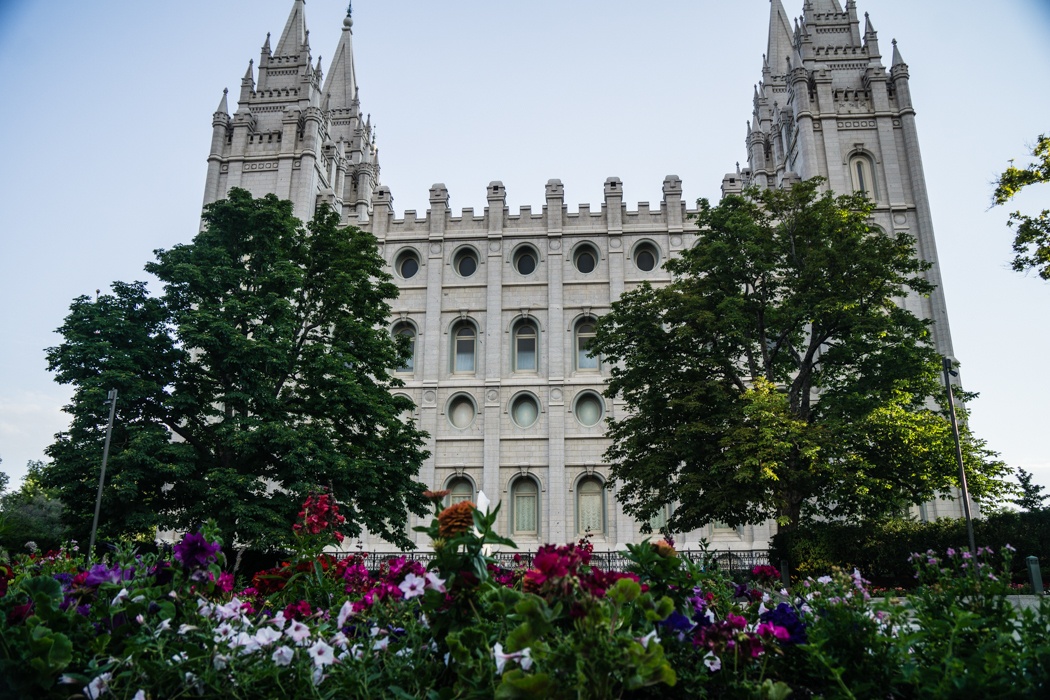 Things to do in Salt Lake City

The first taste of the scenery in Northern Utah will be flying into Salt Lake City. You will notice a predominately flat city surrounded by canyons all the way around and a patchwork of wetlands of all different greens connecting to the Great Salt Lake.

Arriving around lunchtime, make the first stop Temple Square to check out what has been called the Vatican City of the United States. Owned by the Church of Jesus Christ of Latter-day Saints, it represents 35-acres of land, boasts the largest ancestry program in the world, the famous Tabernacle Choir and deep history in the city, making it a great way to start a trip in Utah.

It is accessible through a self-guided tour, but probably more rewarding through a guided tour, which will give you a history lesson along the way. The best views are from the administration building, where you can see the whole city including the Capitol Building.

Salt Lake City is also special in the way it has a handful of mountains ripe for skiing just right outside the city. During the summer that means stunning mountains to hike. After a cultural afternoon for day one, day two should be spent exploring the great outdoors.

Lucky for you, you don’t have to go very far to find it. Start the morning off with a horseback ride at This Is The Place Heritage Park. One a short ride up the canyon and the whole city of Salt Lake emerges on the horizon. 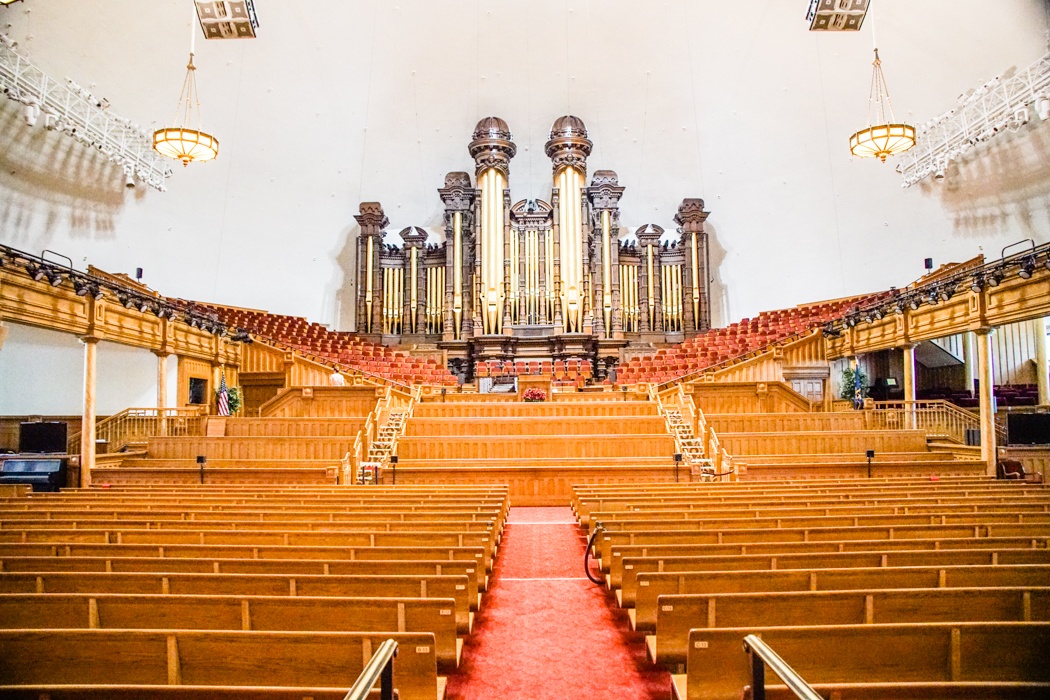 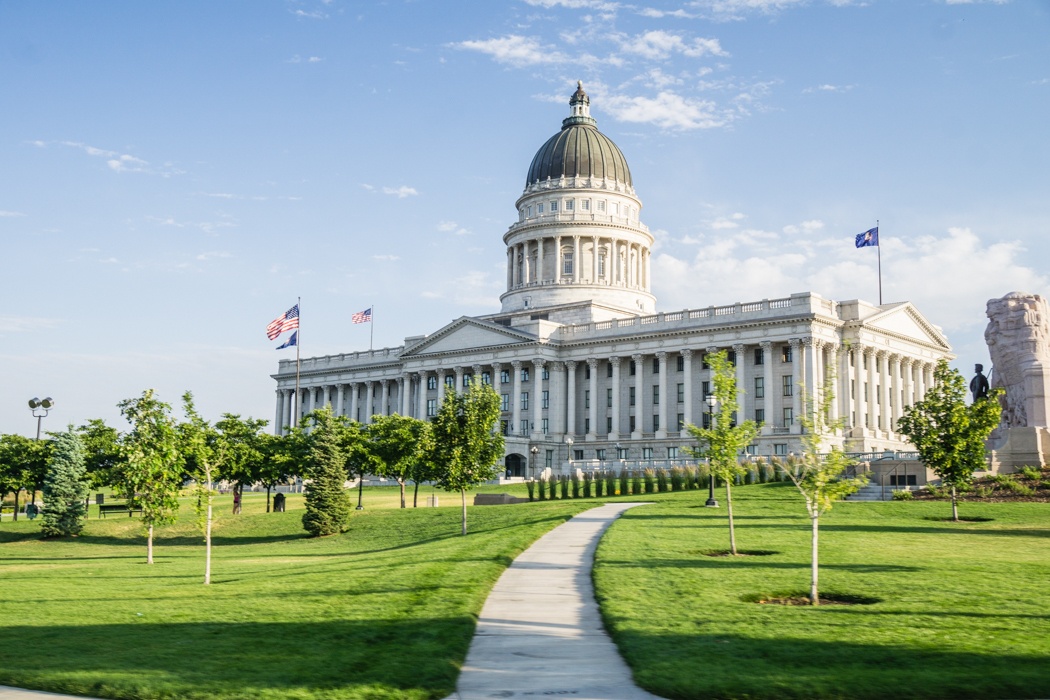 The Capitol Building in Salt Lake City is modelled off the Capitol in Washington DC. Image © Steph Ridhalgh 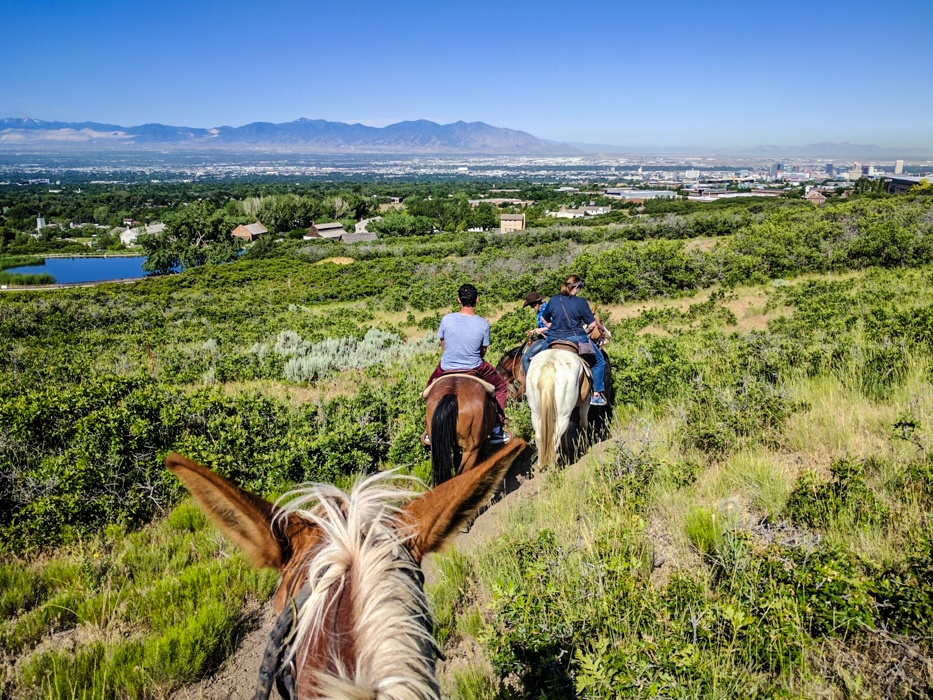 Horse riding looking down into the Valley over Salt Lake City at This Is The Place Heritage Park. Image © Steph Ridhalgh 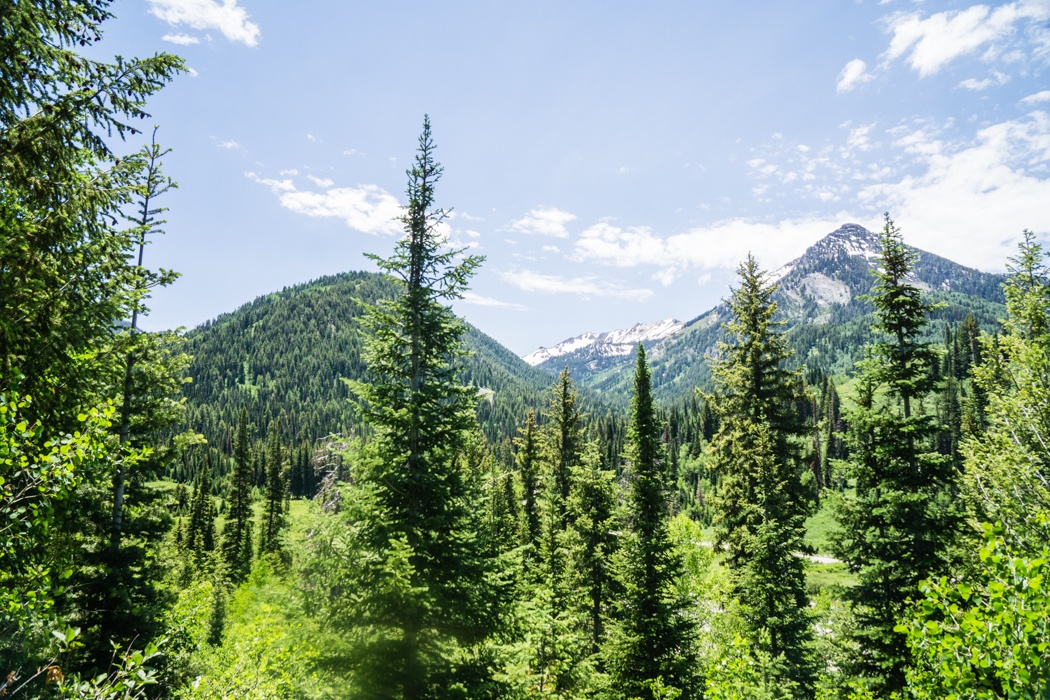 Things to do in Ogden

Only 40 mins from Salt Lake City, Ogden is perhaps the ‘diamond in the rough’ of the Utah cities and should be put on any Utah road trip list. Between its place in American history, outdoor lifestyle and a ski town in its own right, it’s a hotspot waiting to be found.

The Odgen Via Ferrate, which translates to Iron Road in Italian, is one of three in the United States and it allows you to basically become a seasoned rock climber in a matter of seconds. Beat the heat and organise a tour early.

Hike up Waterfall Canyon and then start the climb. There are three levels, but I wouldn’t worry about a challenge if you end up only doing Level one. Even though you are hooked into welded iron, they are designed to give the full experience of rock climbing and you will be scaling rock edges.

Get to Know Ogden’s History

Ogden played a pretty significant part in American history (isolated from the Morman history), with a Wild West reputation to follow. Serving as one of the main railway hubs and the junction for the Transcontinental Railroad, it later ‘flourished’ in the prohibition era and 25th Street became a gateway for organised crime, gambling, prostitution, liquor, and opium.

A series of tunnels were built from Union Station up underneath storefronts, many of which still exist today. Come twilight, which is 9 pm in the summer, the magical mountains that surround Ogden come alive with pinks and purples. 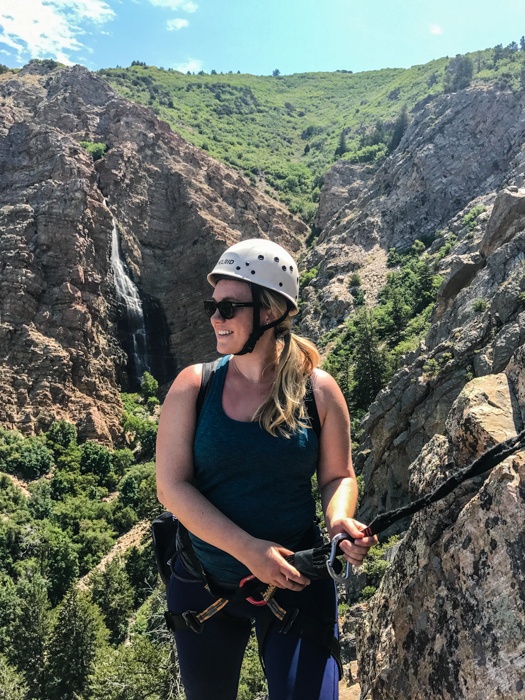 Conquering my fear of heights one mountain at a time in gorgeous Ogden, Utah. Image © Steph Ridhalgh 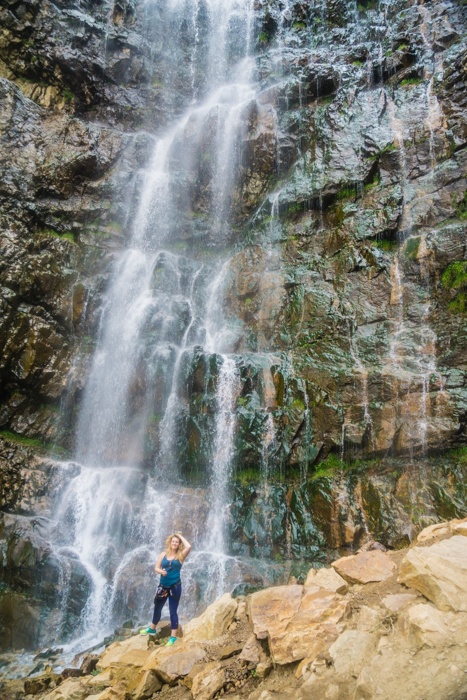 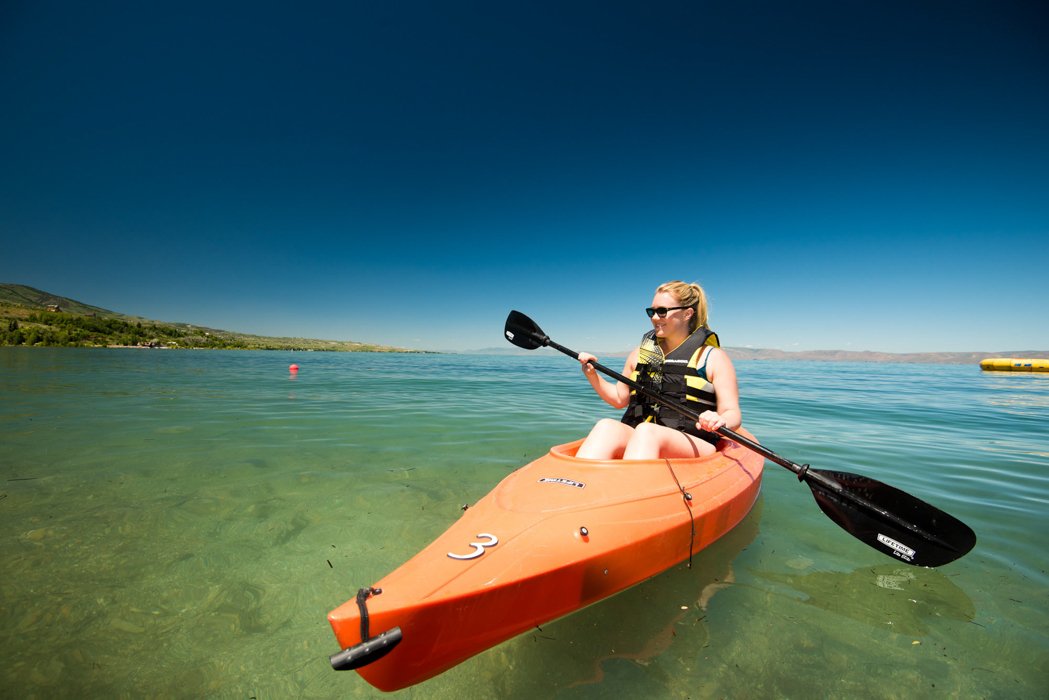 Things to do in Bear Lake

With all the ski fields so accessible in the winter, you are going to want to go a little further in summer to getaway. This is where Bear Lake Utah comes in. Named after its namesake lake, which spills into Idaho, it doesn’t actually resemble a bear. But there are plenty of fun things to do in Bear Lake, no matter the season.

Just 2 hours north of Salt Lake City, it’s a scenic windy drive up through the Canyons. Stop in for a bite to eat at Bear Trapper Steak House, but don’t miss the chocolate shop right next door for a little something sweet. Bear Lake is known for its Raspberry farms, so you can imagine anyone for a penchant for fruity desserts would be in heaven. Don’t worry, they don’t forget about the chocolate lovers.

Check out the lake after lunch, down at the marina where you can rent stand up paddleboards or kayaks.

The place to stay in Bear Lake is the new Conestoga Ranch. It’s a unique glamping establishment where you have the choice of three types of accommodation including a large tent, an old fashion pioneer wagon or the grand tent with a bathroom. If you are one to fail at camping in the literal sense, this is the place for you; it is all luxury with just enough authentic camping activities, like roasting s’mores by your own campfire, that is started by the staff each night at your request. 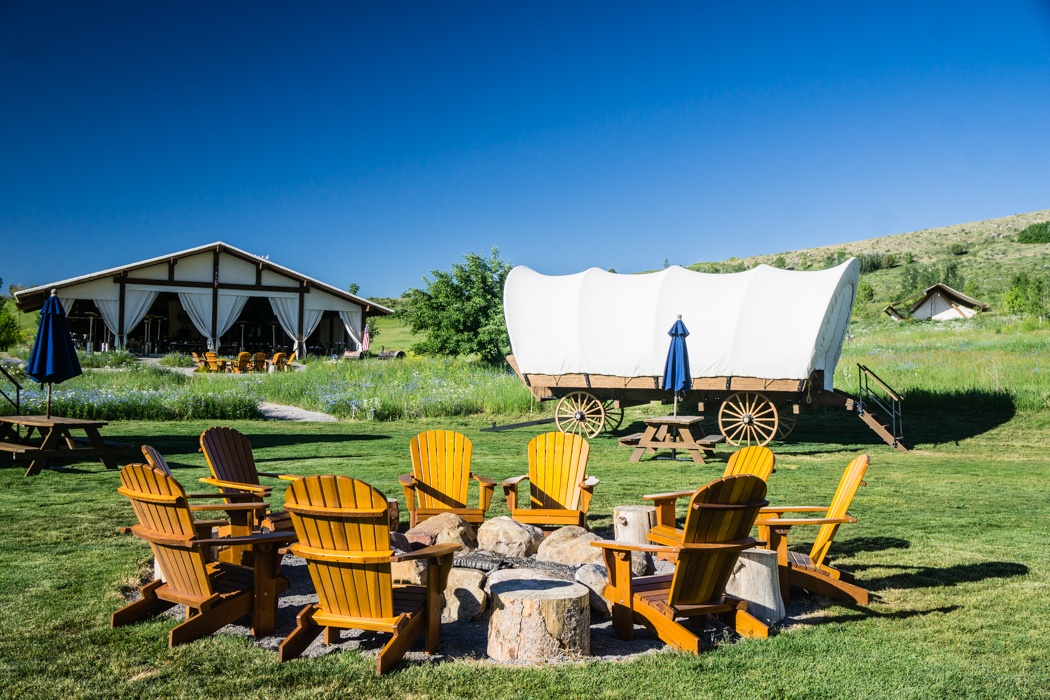 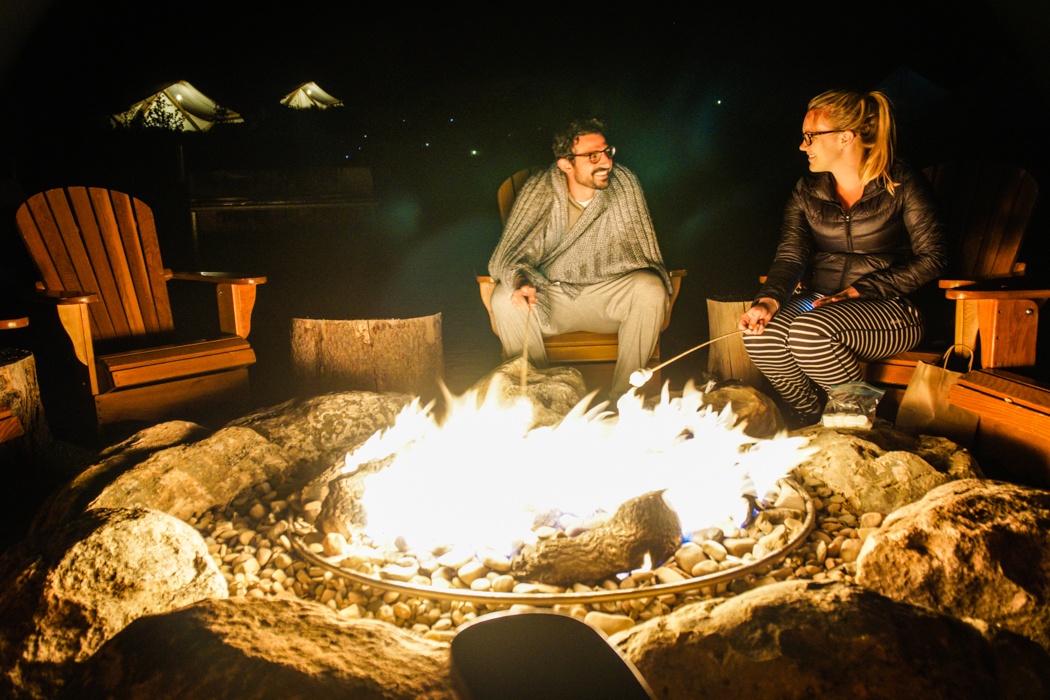 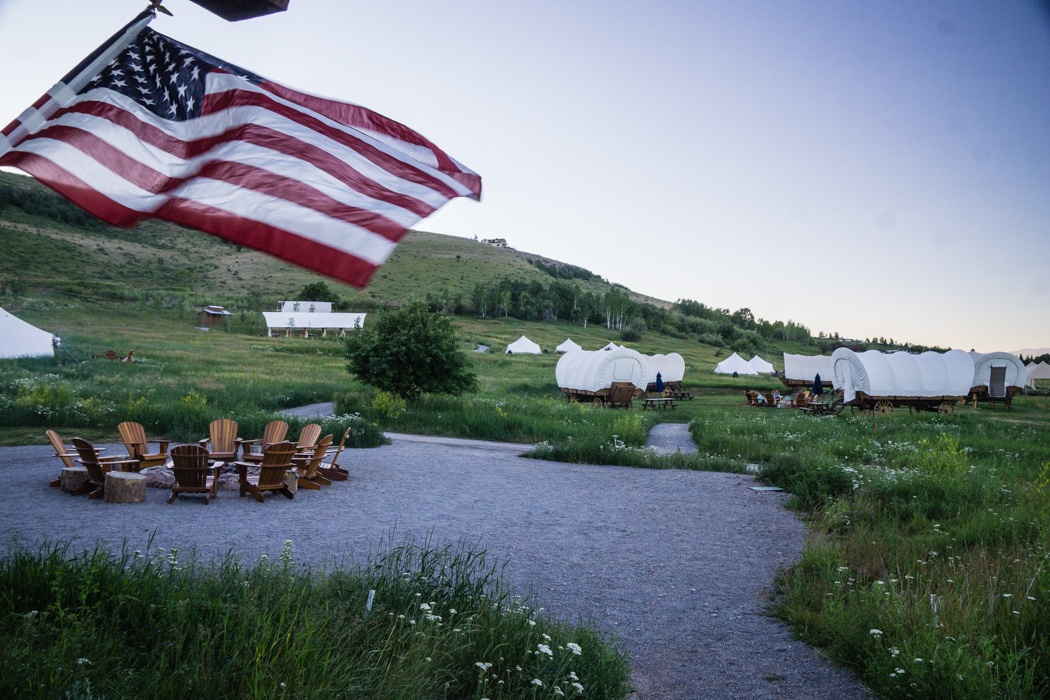 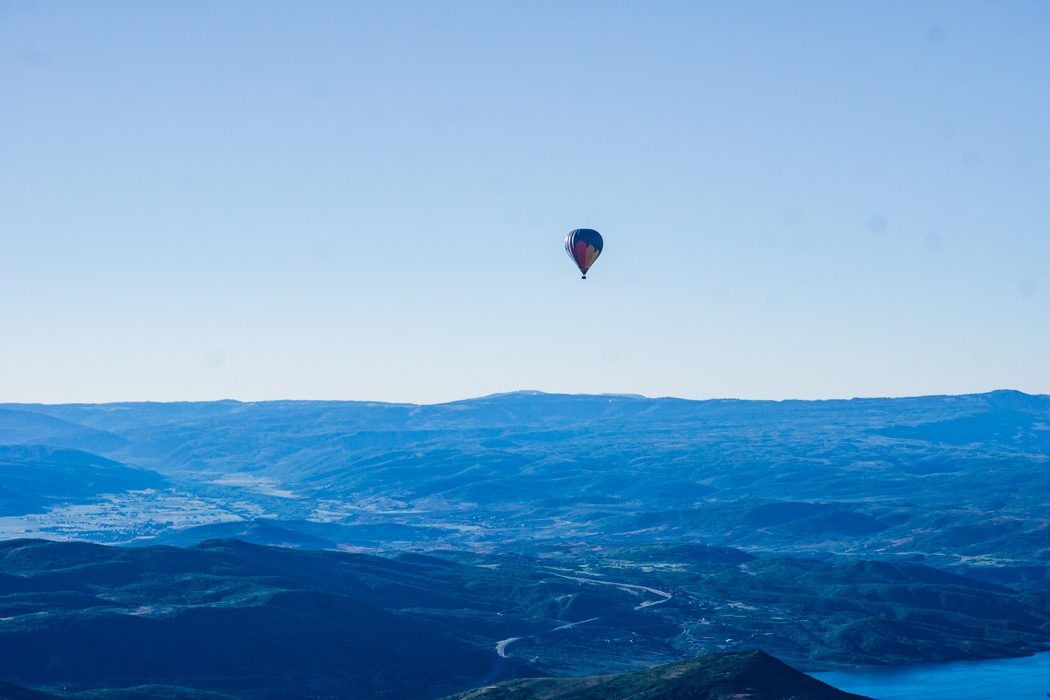 Things to do in Park City

The final stop on your Northern Utah road trip should be Park City. More than just home to ski fields and Sundance in the winter, it boasts an active outdoors lifestyle in the summer.

So much so they have turned the Olympic Park, which was built for the Salt Lake 2002 Olympic Winter Games, into an athletic park, which can keep both adults and kids, entertained. Do not miss an opportunity to experience the official Olympic bobsled track, which in summer rolls down the concrete track with speeds up to 60 mph and three times the force of gravity. It’s worth the extra pennies. You can spend hours here, but it closes at 6 pm so keep that in mind.

The best way to start your final day in Park City is on a high. As in, in a hot air balloon ride at sunrise high. Flying all year round, the views from the balloon with Park City are breathtaking. And for those a little scared of heights, the slow take off helps with adjusting.

Don’t forget to eat something after the hour-long balloon ride to settle the nerves. Vessel Kitchen focuses on fresh healthy, seasonal food with a little welcome Aussie inspiration.

After such an active day prior at Olympic Park and an exciting morning up in the air, you may want to shop at the Outlets or take a stroll down Main St. You know the city will be cute when the main street is simply called Main St.

Do a Tasting at Alpine Distilling

Before heading out to the airport, finish off the at Alpine Distilling. It will be hard to walk out of there without buying a bottle of the “Preserve”. Rob Sergent, the owner, is a great storyteller and will gladly share the story of how came to found out his family made moonshine after he opened the Distillery.

With the proximity of Park City to Salt Lake City (an easy 20 to 30-minute drive) means you can get the most out of your last day without having to be in transit.

The Fit Traveller was a guest of Visit Utah for this Utah road trip. As always, the opinions, words and images are authentically our own. 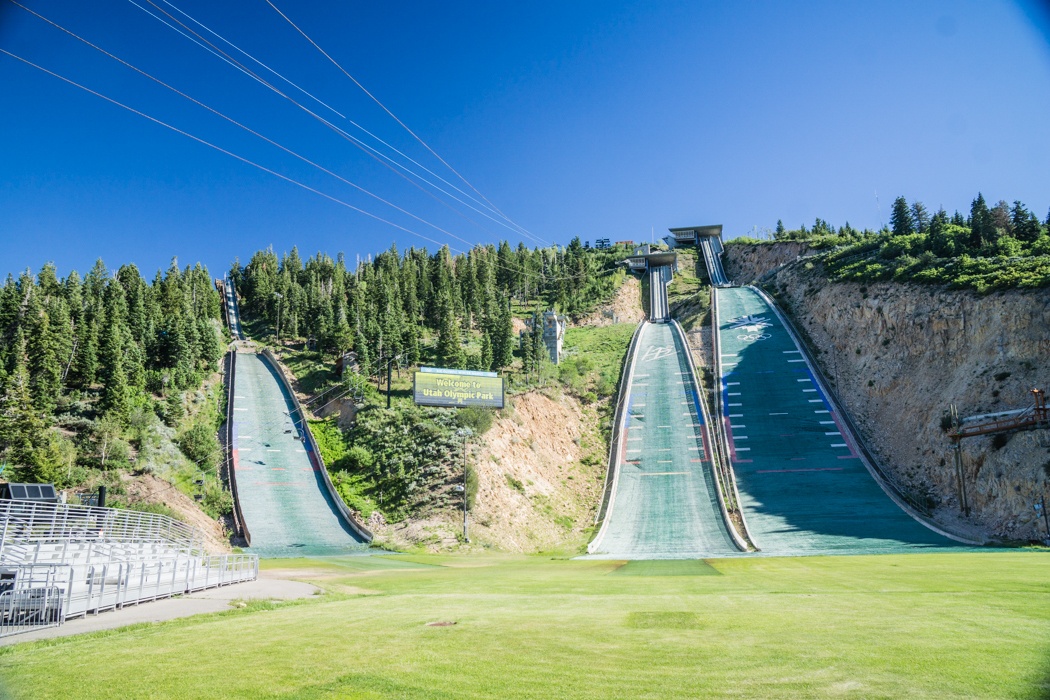 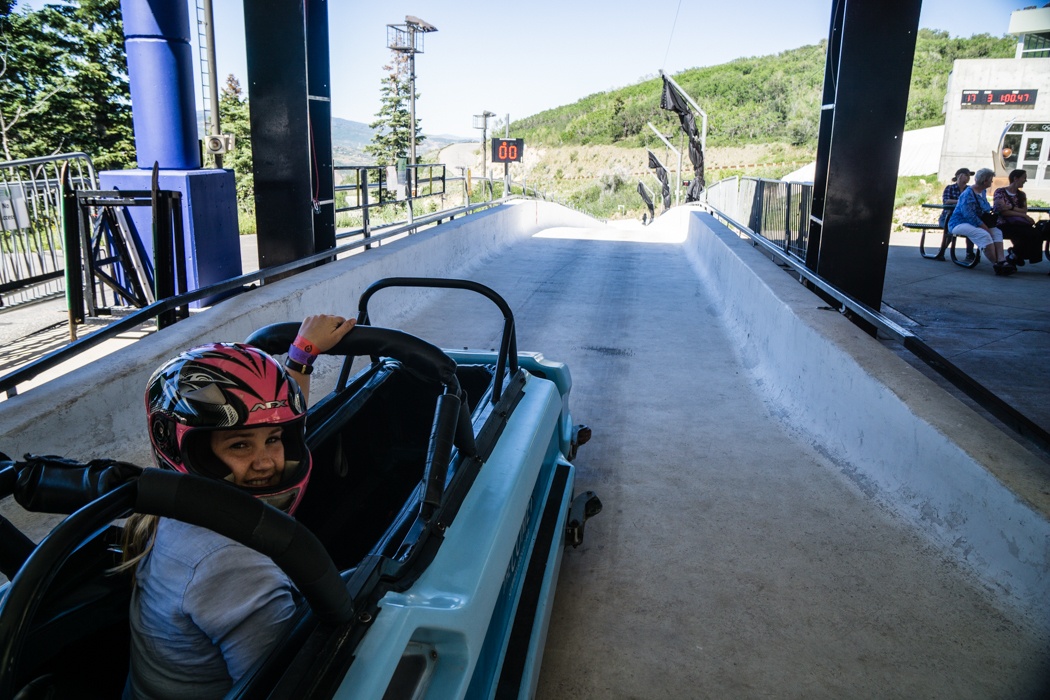 Jump in a Bobsled with a trained Pilot and zoom down the official Winter Olympics track. Image © Steph Ridhalgh 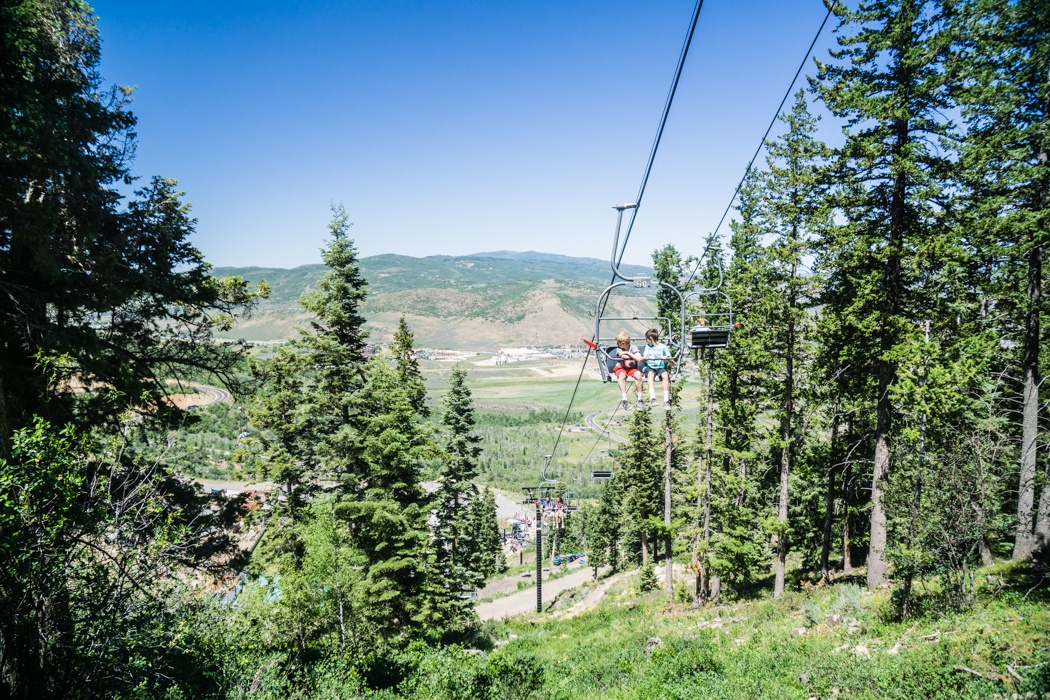 So lush and green during the summer – this is Northern Utah. Image © Steph Ridhalgh 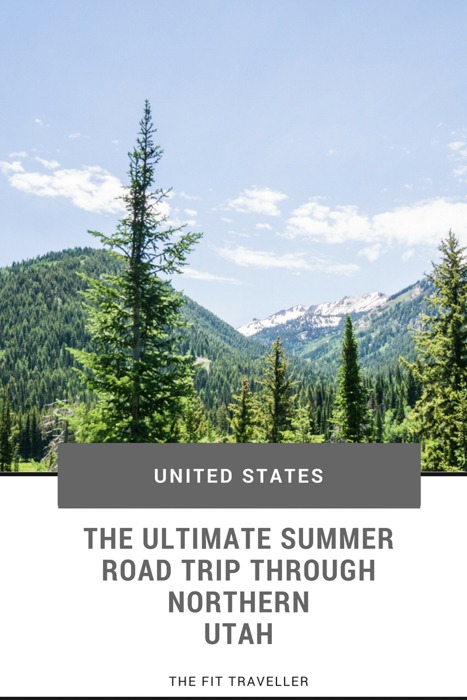 « The Best Places to Visit on Mexico’s East Coast
What to Know and Things to do in Salt Lake City, Utah »