In the modern day practice of yoga, the mat has typically been considered a space dominated by women. But there is a group of yogis from around the world set to smash that stereotype. BOYS OF YOGA is a collective of male yoga practitioners from all corners. They are proving that yoga is a lifestyle for both men and women and taking that message to the world with Wanderlust 108. Yoga teacher, photographer and the founder of BOYS OF YOGA, Michael James Wong filled us in on the crew’s motivation, mantra and mission. “Some guys think that yoga makes you less of a man, the truth is it makes you a better one” – Michael James Wong, Founder Boys of Yoga. Image © BOYS OF YOGA LLC

How do you describe BOYS OF YOGA?

BOYS OF YOGA, the uncelebrated minority, a crew that believes in the strength and flexibility that yoga offers both on and off the mat. To us, yoga is a culture and a lifestyle, not just a practice. And similar to surf, skate and snow sport cultures, yoga creates a community of the like-minded. The deeper you go, the more it pulls you in. Once you move past the stereotype, it’s pretty simple: yoga is good for everyone, the benefits are undeniable.

What started as a casual conversation about how guys are seen as the secondary citizens in the yoga scene, has turned into a movement to challenge the way we view yoga in the Western world today. Victor Chau holds a pose in the streets of Hong Kong. Image © BOYS OF YOGA LLC

What do you think is the biggest misconception about men who practice yoga?

Some guys think that yoga makes you less of a man, the truth is it makes you a better one.

You fell in love with yoga when you were in Australia, right?

Australia will always be a my yoga home. It was where I found my voice and the place where I was first inspired to teach. Over the years of living, traveling and teaching abroad, Australian yoga has always been the benchmark of amazing teachers and practitioners. It’s an inspiring community to be a part of, and it’s a part of me that travels with me wherever I go in the world now. What is it that yoga gives you on a daily basis?

For me, yoga is all about creating space – in my mind, in the movements of my body and in the daily chaos that surrounds our everyday.

You teach yoga, do you find you attract more men to class?

Teaching yoga for me isn’t about attracting a certain type of person male or female, it’s about providing an experience that helps anyone and everyone connect and wake up to what’s happening in their lives physically, mentally and emotionally. Yoga is the full package and I’m just glad to have anyone in the class bold enough to step inside and spend some time with themselves in practice Brian Crawford combines his passion for the practice and photography, travelling the world as a yoga photographer. Image © BOYS OF YOGA LLC Professional basketballer Jason Anderson‘s love of yoga began through the practice of Yoga Nidra to help him fine tune his performance. Image © BOYS OF YOGA LLC What would you say to men who are intimidated by the idea of starting yoga?

The best advice for guys who are new to the practice is to just do it and then talk about it after. For so many guys the biggest issues with the practice isn’t the class, it’s the word yoga itself.

How do you see yoga evolving over the next 5 years?

The world is finally waking up to being more mindful, awareness and willing to happy. And yoga is such an amazing vehicle to bring this to the world. In the not so distant future, I see and believe that more and more people will give yoga a try, and taking the first step is the hardest. Octavio Salvado is building THE PRACTICE – BALI where yogis can experience teachings from the Kriya lineage. Image © BOYS OF YOGA LLC What is your role with Wanderlust 108?

This year at Wanderlust 108 in Australia and New Zealand I’ll be bringing my project BOYS OF YOGA to four amazing cities that brings together a crew of different BOYS from around the world to share their version of the practice. It will be the ultimate yoga taster for all to enjoy, and most of all it’ll be fun and great way to see the power of connection in our global yoga community.

What do you hope to get out personally from the event?

If the BOYS OF YOGA project can help to inspire just one guy to step onto the mat, then we’ve done our job. BOYS OF YOGA and amazing events like this are about opening more doors to the practice and creating as much accessibility for guys to give it a go. Once you’re on the mat, the practice will sort out the rest.

What’s next on the agenda for BOYS OF YOGA?

This year there is a lot going on for BOYS OF YOGA with loads of festivals and events all over the world. My intention this year is to continue to spread the project and continue to share the stories of amazing teachers from around the world. Rory Hopkins came to the mat to heal and strengthen his travel-weary body. Image © BOYS OF YOGA LLC “Yoga had it all for me: the philosophy, an approach to life, and the awareness of my mind and self.” – Pro footballer Marc Laws II Image © BOYS OF YOGA LLC 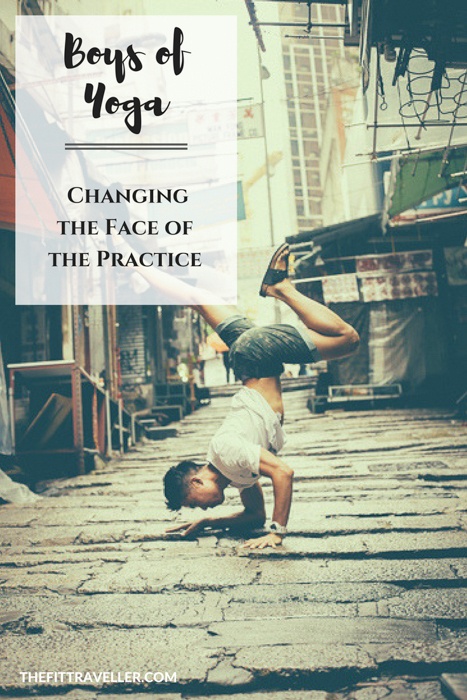