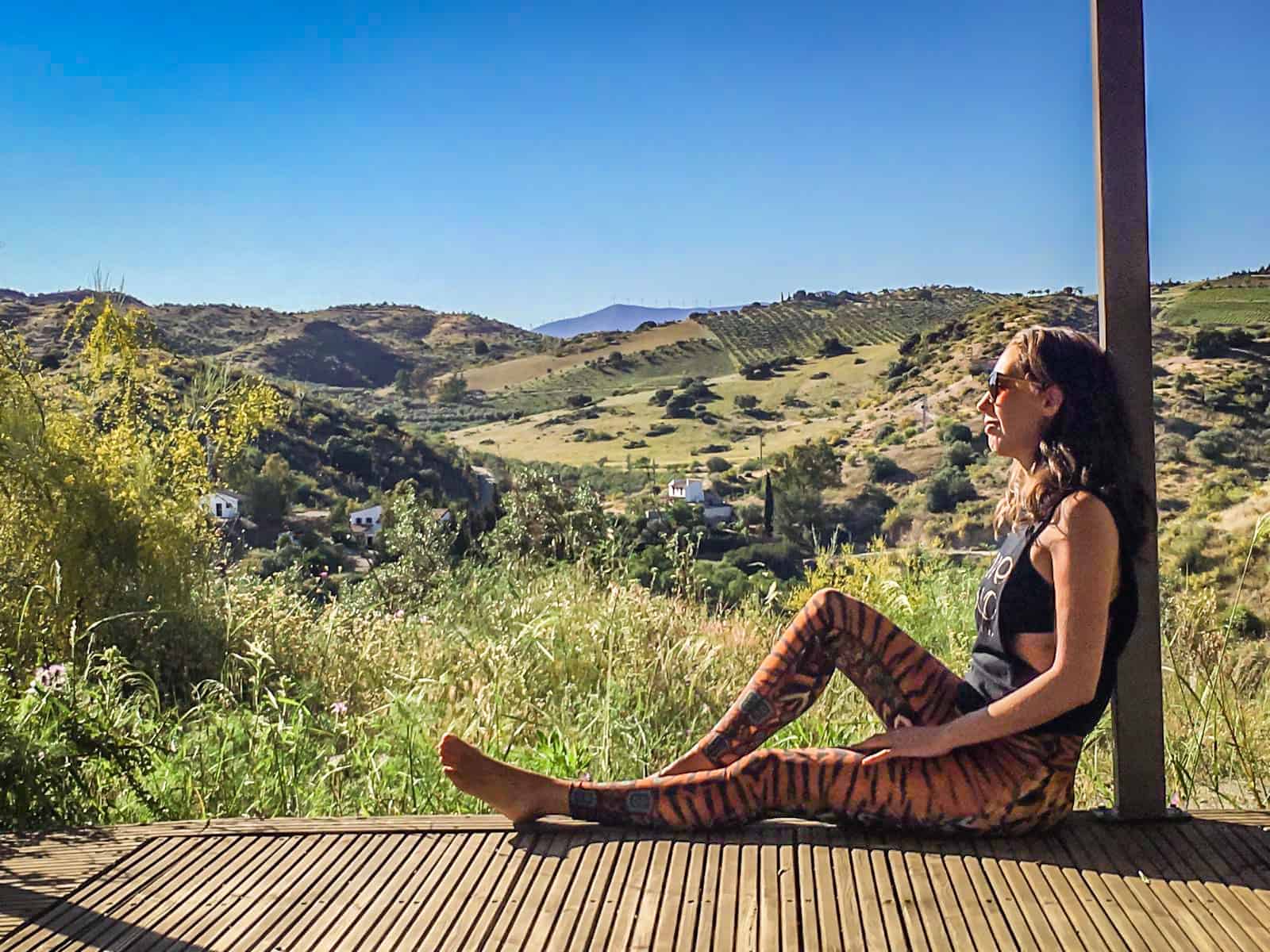 “I’m an elephant” I announce to the group. Everyone nods sagely as if this is most normal thing in the world. Thankfully, this isn’t the start of an interpretive dance class. I’ve simply picked out my “animal spirit card” for the week. An elephant feels appropriate. I’ve come to Omega Movement’s “Move with Alignment” yoga retreat in Andalucía, Spain. I am here to get grounded, to get back in touch with who I am and what I want. A nice heavy elephant seems like a good sign. 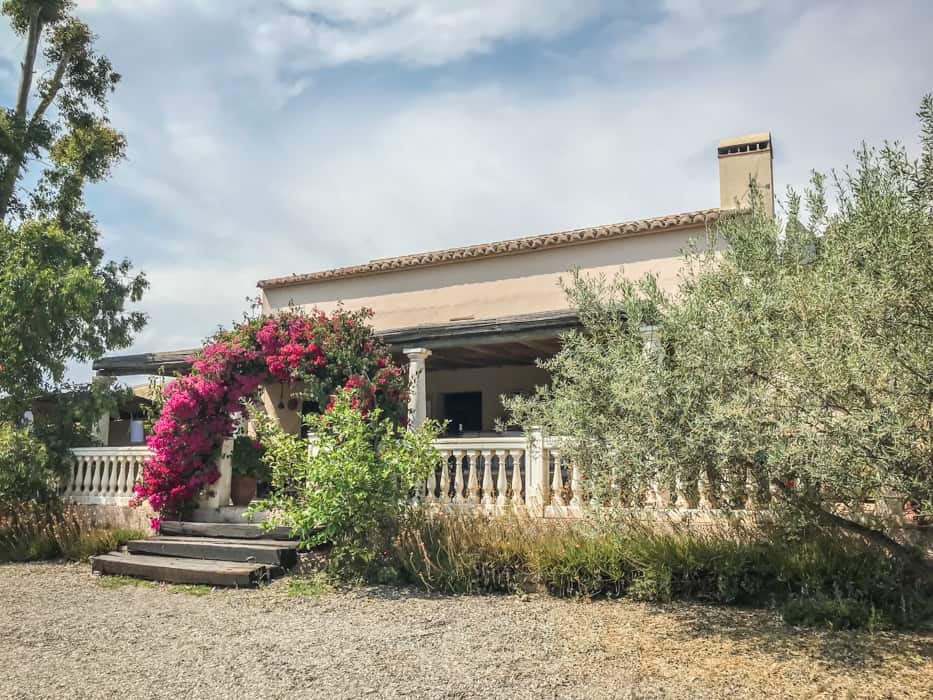 What I hadn’t appreciated is the elephant is a ‘fire sign’. It burns a path, getting rid of the unnecessary en route. Like the Hindu God Ganesh, whose statue watches over the yoga deck here,  the elephant is the remover of obstacles. Which is exactly what this retreat is designed to do. I joined Omega Movement for a week at Valle de Vida Malaga, a retreat centre hidden deep in the countryside of Andalusia in southern Spain. The company runs retreats all over the world, seeking out locations that reflect their ethos of finding space and balance. Valle de Vida, sprawled over a Spanish hillside, is one of their favourites. Palm trees, cacti, tepees and the odd horse skull give a Wild West feel. Dogs amble, cats chirrup and a neighbouring donkey periodically calls out like an overenthusiastic toddler trying to play the French horn. There isn’t a phone signal and limited Wi-Fi so there’s really no choice but to switch off and reset.

Guests can choose to stay in the main house; a rustic Spanish finca with thick white walls and wooden shutters, or immerse themselves fully in nature in one of the high-end tepees or ME-Pods (large solid domed cabins) in the grounds.

Related: The Quiet Side of Ibiza 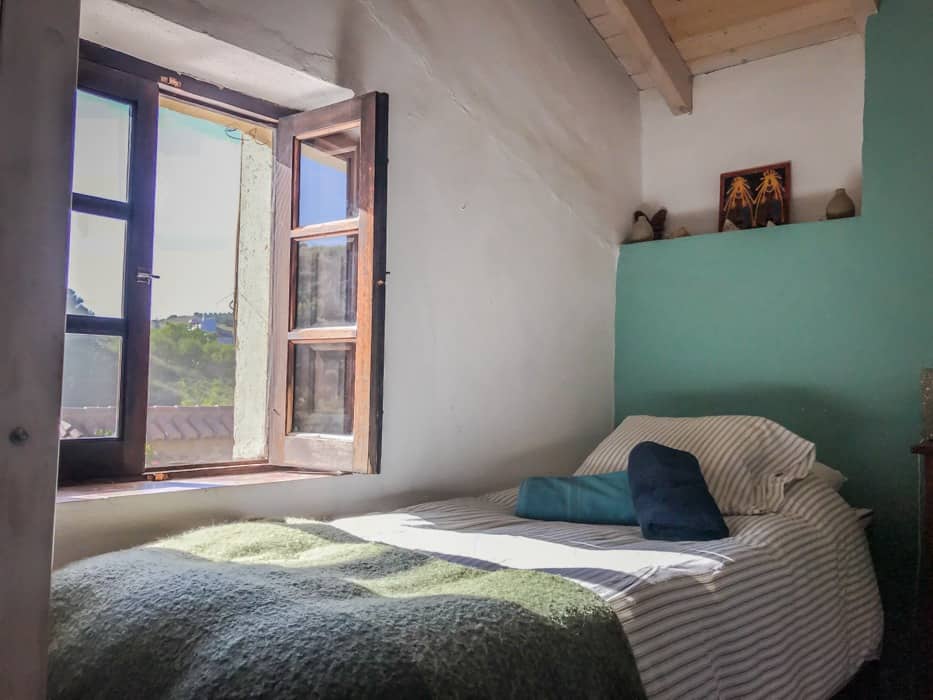 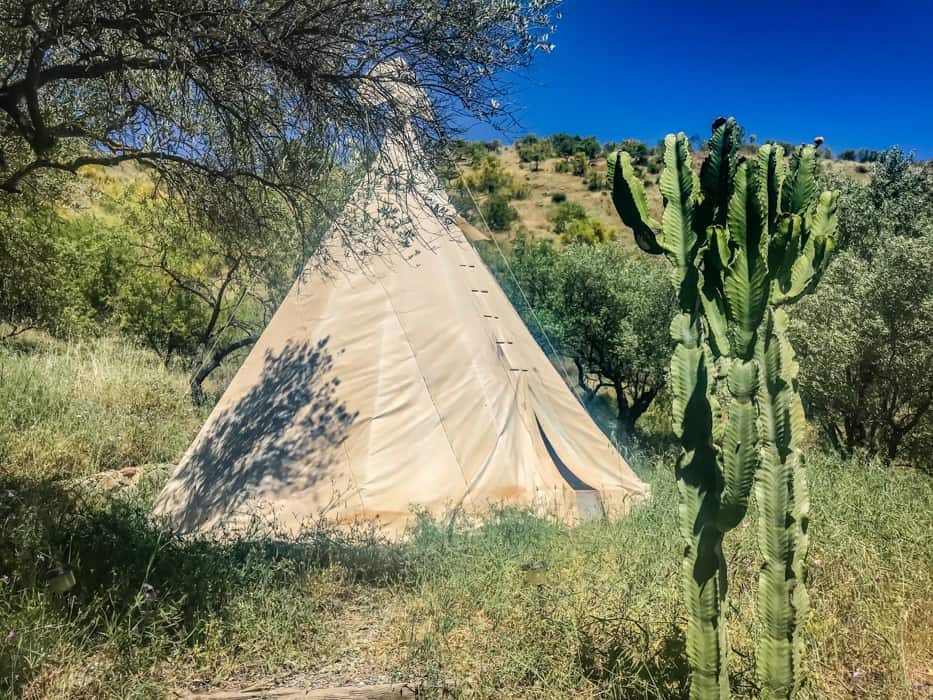 A teepee – one of the options for guests to stay in at Valle de Vida, Spain. Image © Annie Scott

The property is well set up with everything you need for a week of self-care, including a sauna, steam room, treatment rooms, hot tub, magnificent hill-top yoga shala and indoor heated yoga studio. There’s also an outdoor pool and plenty of shady nooks to lounge the day away in under twisting vines. 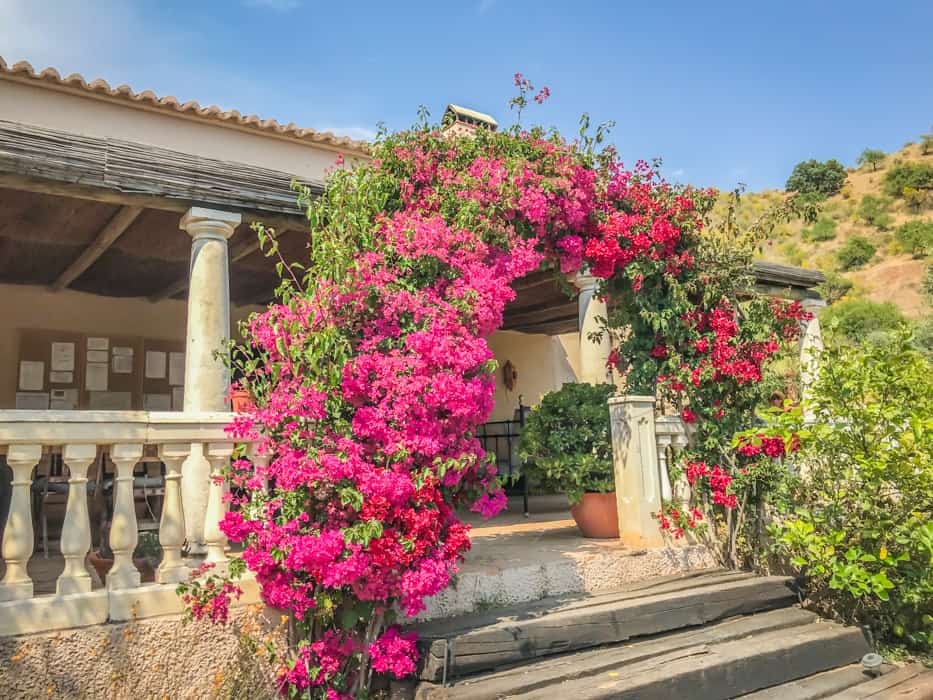 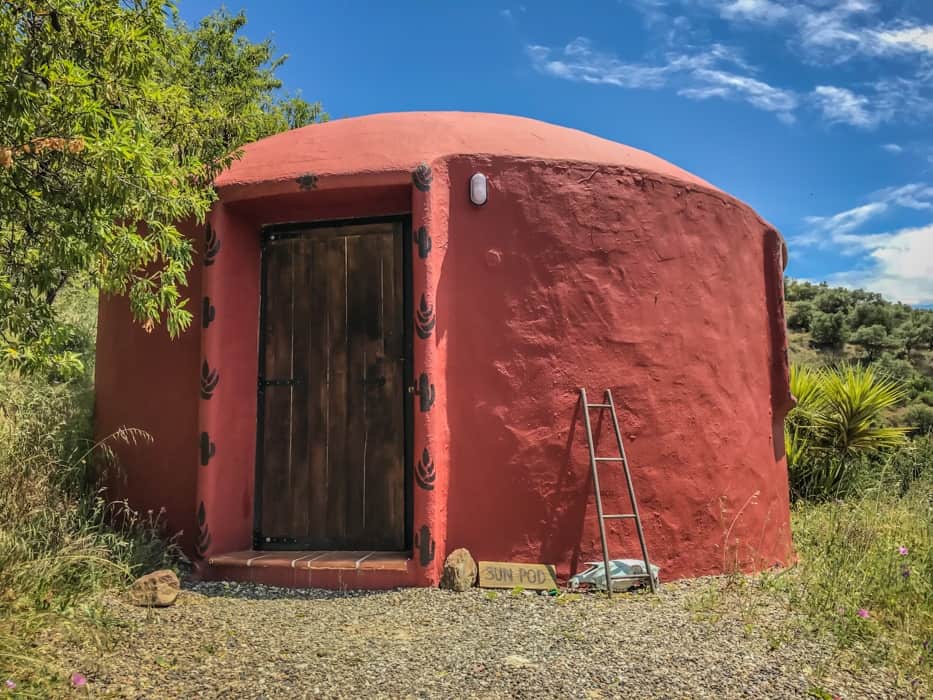 A ME pod. Another option for guest accommodation at Valle de Vida, Spain. Image © Annie Scott 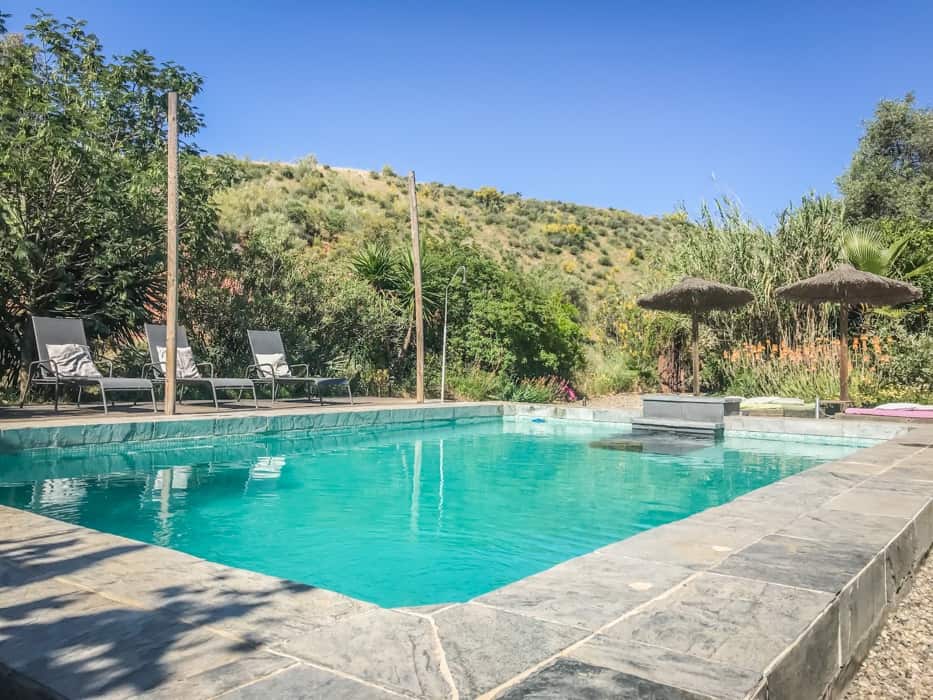 Meals are eaten at a communal table outside on the terrace. Ian the chef provides a stream of delicious vegetarian meals and occasional bit of fish and seafood. The man does extraordinary things with a vegetable and has given me a dangerous beetroot habit (a sentence I never thought I’d write). 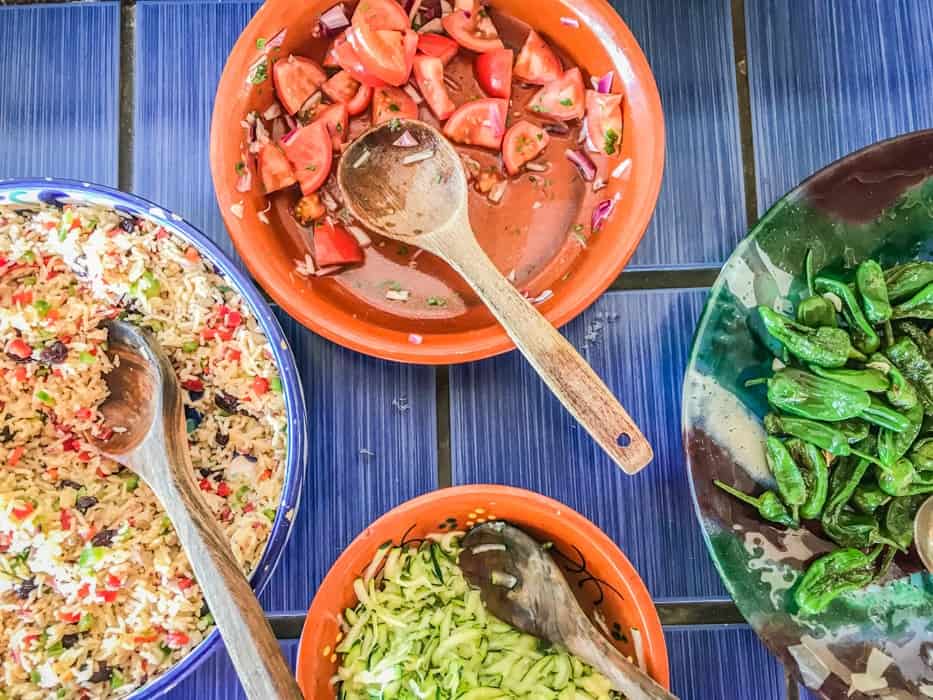 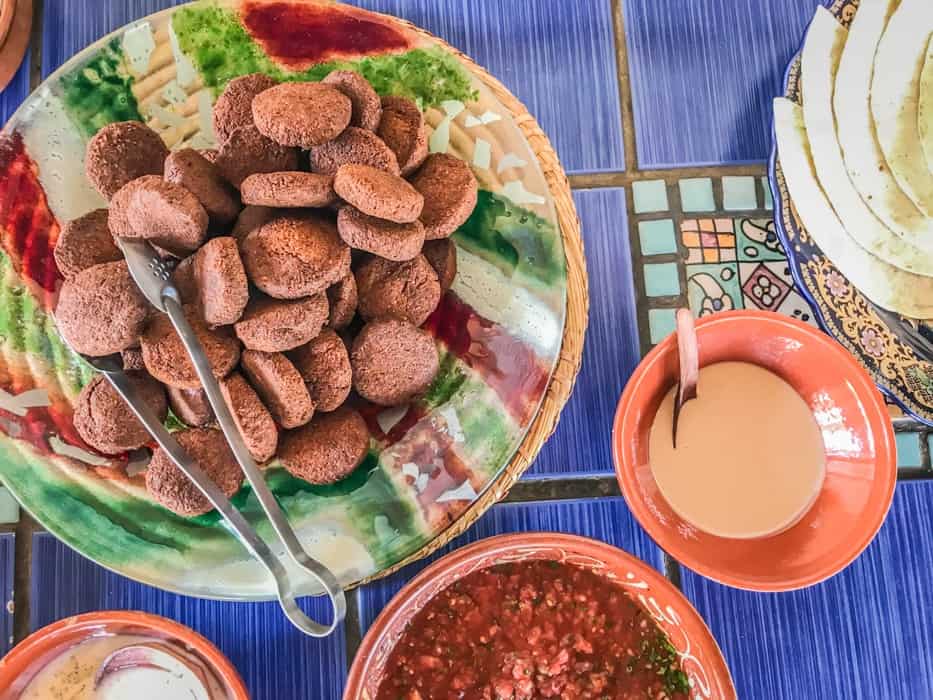 Culinary highlights include spinach and ricotta filo pie, calamari, apple crumble, vegetable curry, a coconut dahl so delicious and had a third (ok, fine… fourth) serving of it, apricot cobbler and gluten and sugar-free carrot cake. Juices, smoothies and homemade bread make breakfast a treat. There are lots of gluten-free options too. 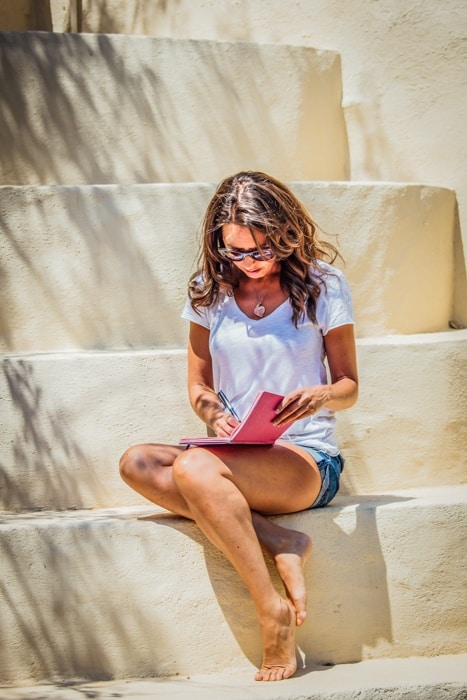 Annie taking some time to journal at the retreat. Image by Sian Mercer 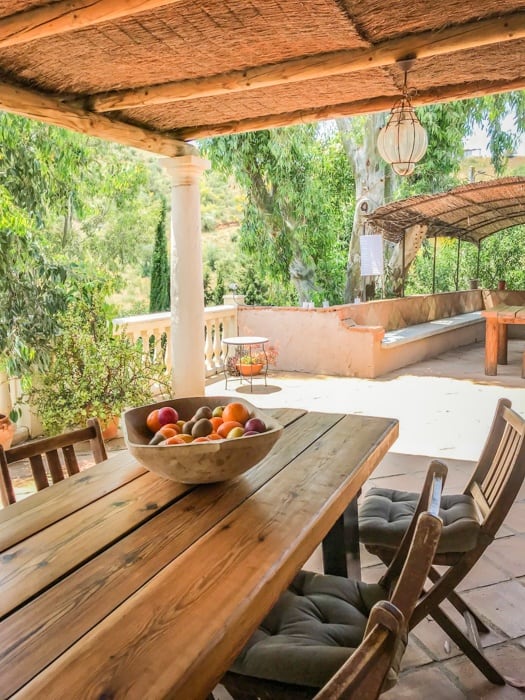 The retreat is run by Omega Movement owners Nid Seymour and Molly Martin, who take a holistic approach to teaching. This is not a boot camp. The emphasis is on self-nurture and compassion. So, if you’re looking for a punishing regime, this is not the retreat for you.

Both trained yoga teachers, Nid also specialises in Pilates, Reiki, Yoga Nidra and a plethora of other healing techniques. They both have a background in the therapeutic application of yoga and this nurturing approach really marks their retreats out. 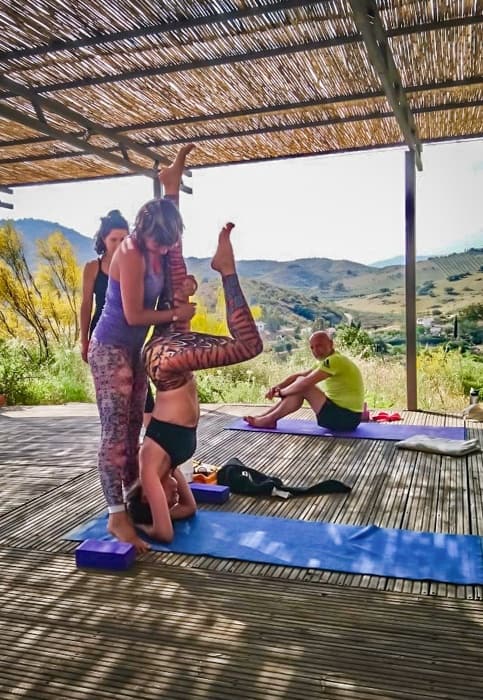 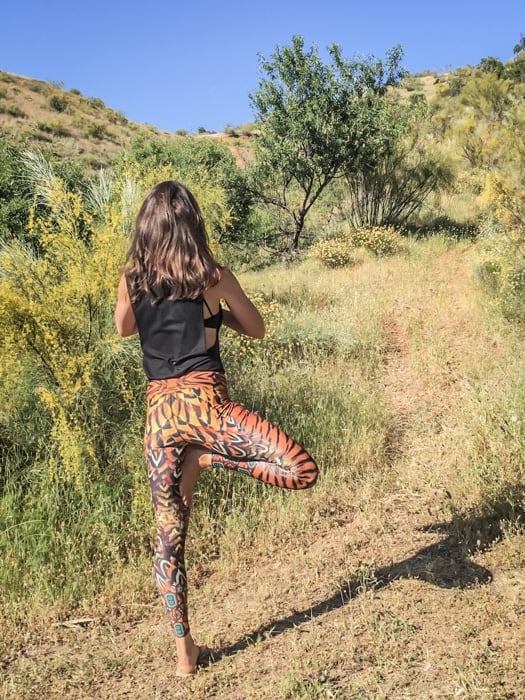 A tree with trees in the beautiful grounds of Valle de Vida, Andalucia. Image by Sian Mercer

“We want to give people space to let go – not just relax”, explains Nid. “A lot of the time we’re just holding stuff together. We put a lid on things – we’re containing emotions and we’re trying to be socially acceptable”.

“What want to help you let that work its way out, so that you have less in your subconscious that’s going to feed into that stress. We always start in the physical – bringing people back into their bodies – then quite quickly open people up energetically and get the healing moving.”

The organisation is impressive. Before the retreat we’re offered a Skype call to understand what we’re looking to get from the week. The retreat is then tailored specifically to the needs of the group, including a one-to-one class for everyone. 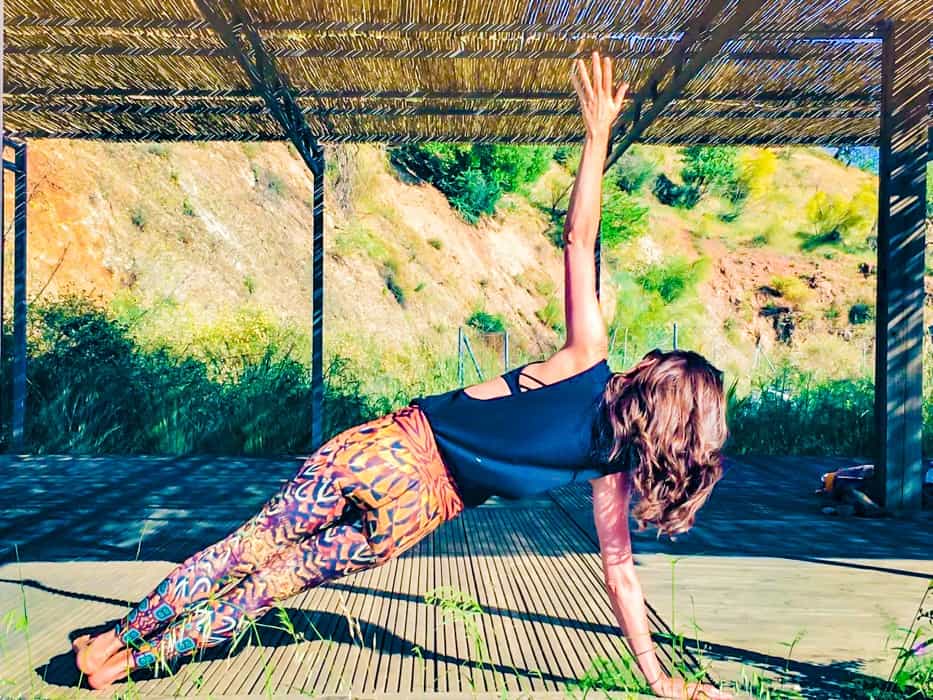 Side planks on the yoga deck with Omega Movement. Image by Sian Mercer

Each day starts with a Pilates class, followed by breakfast. Most days feature a workshop aimed at cultivating good habits – including journaling and intention setting – and there are optional excursions to the town of Rhonda, or to explore the nearby lakes.

There’s plenty of free time too, to read by the pool or enjoy one of treatments on offer from massage to osteopathy to reiki. The afternoon closes with yoga on the hilltop yoga deck before dinner. After dinner activities include Yoga Nidra, sound healing and – just as good for the soul – a cinema night.

There’s a real emphasis on helping people integrate what they learn back into their lives, something that’s really important to Nid.

“It’s fabulous that people are choosing healthy holidays”, she explains, “but we take that a step further so you’re not separating your life – having a nice holiday then just going back to a super-stressful back home. We want to help people find the tools to feel like being at home is as good as being on holiday”.

This isn’t just talk. Retreaters are given access to recordings of classes, helpful notes, practical tips and an hour-long virtual follow-up session with either Nid or Molly. 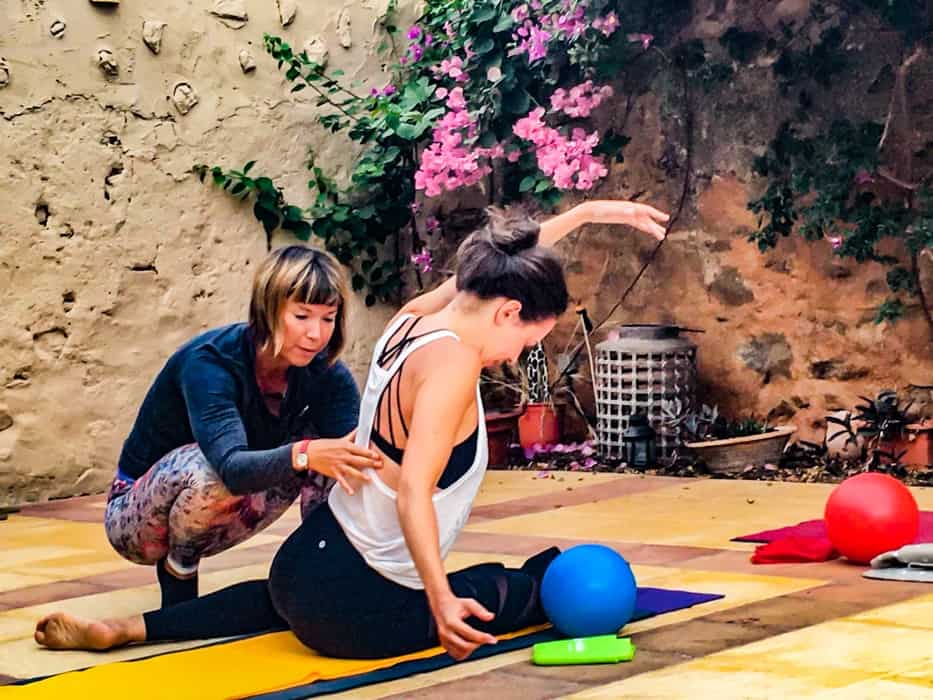 I’m a retreat junkie. They’re like catnip to me. I go on retreats because I’m looking for answers. Answers to questions like “what’s wrong with me?”, “why does my mind cause me so many problems” and “will I ever be Instagram-bendy in yoga?”.  Yoga has really helped me manage bouts of anxiety and depression over the years and regular retreats make all the difference.

I share this because it’s fair to say I “know” retreats and I know when something special is at play.

The week starts off gently. Too gently for my liking – I’m like an athlete waiting in the stops for the starter pistol. I’m irritated by the slow pace of the classes. Someone wants to put a photo of me doing yoga on social media and I hate it. I look fat. I look like a man. What’s wrong with my shoulders? I feel anxious and irritable.

I explain my frustrations to Nid, who assures me the practise will build over the week. “Be aware that we’re working a lot energetically too”, she cautions.

This is a new area for me and – if I’m honest – the lack of physical impact makes it hard to accept it’s “a thing”. Energy healing works on a level beneath your awareness of – clearing thought patterns and things you’ve been holding onto. Like that elephant, charging through and clearing the best path of any rubbish that might be in the way. Which probably sounds like mumbo jumbo – apart from the fact that it works.

I have a Reiki session and can feel the energy in my body settle. I try to emulate this during our end of class meditations every day. One evening we have a sound healing from Ian the chef-come-shaman. The idea a chap leaping around banging bowls over my head didn’t immediately appeal – but oddly it works. The music takes me on an emotional journey I was not expecting. Regular Yoga Nidra classes help me sleep better. We’re also given a fascia release class in which we’re warned that “stuff might come up” – patterns and experiences we’ve stored in our own fascia.

I ask Nid what we’re meant to do with all this. She smiles. “Just let it go”.

One evening something really strange happens. During Yoga Nidra my mind goes very dark. We’re told to imagine ourselves floating on a blue sea under a clear sky – and I find myself in shark-infested waters in a thunderstorm. My mind seems to be turning on me in a way I don’t understand – it’s terrifying. Yet here was a huge revelation. If my subconscious is operating like this all the time, no wonder I get so scared. It was as if someone had pulled back the curtain a fraction and given me a glimpse at what my mind gets up to when it’s left alone.

After that, I just let go. I stopped trying to be ok and I looked fear straight in the face and stopped running. 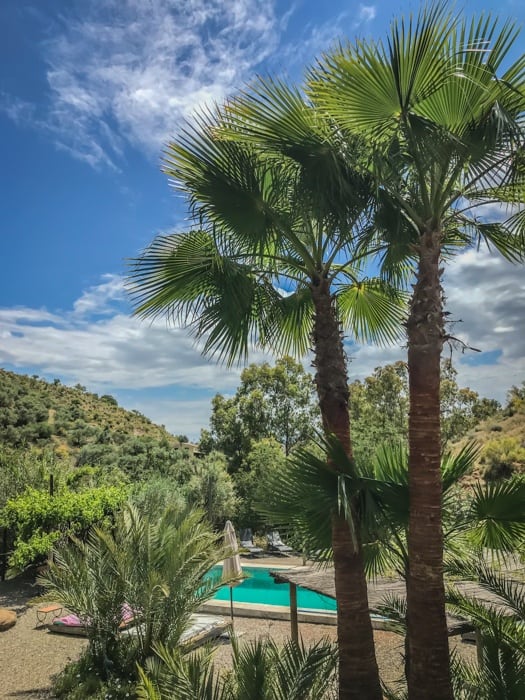 The pool and palms in the grounds of Valle de Vida, Malaga. Image © Annie Scott 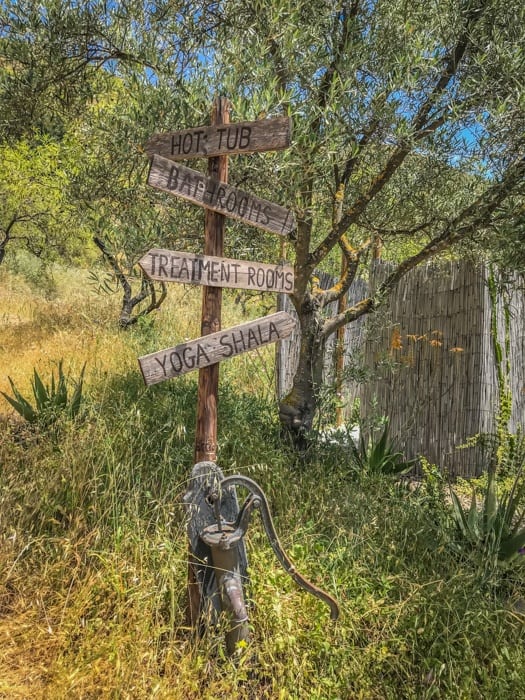 Deciding where to go next. The sign on the Valle de Vida property. Image © Annie Scott

I took a picture on my phone of me as I really am – wild hair, no make up, no filter – and I was ok with what I saw. I spent my days sitting reading books that interest me and trying to avoid scrolling through my phone. I noted the pure pleasure of reading things that spark my interest.

In class, I started moving in a way that felt natural and good to me. I stopped trying to hold things that felt wrong or worry what I looked like. I started breathing fully into my back – and it felt great. I felt grounded. My energy levels started rising. The elephant had cleared the way for something better.

Perhaps this sounds like hokum. But, as I sat on the final night in a hot tub, water lit up by the moon and watching the stars appear one by one – I whooped and shouted into the massive sky. I’ve never felt more connected, or grounded.

This retreat changed me profoundly. Not because I can finally do a head stand or get my head a little nearer the floor in my forward fold. But because I started to do the utterly impossible – to like myself. Timidly at first – but I think it’s the beginning of a beautiful friendship. 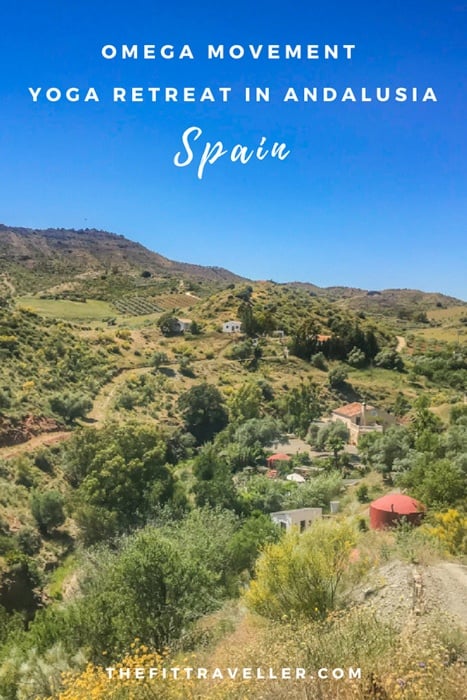 Annie Scott is a freelance writer, communications pro and wannabe urban hippy. Since quitting corporate life you’ll find her saying yes to anything that terrifies her, lurking at the back of West London yoga classes and pretending to like kale.

« The Renaissance: Tours and Activities On a French Luxury Barge Cruise
What to Pack For Travel With a Baby »