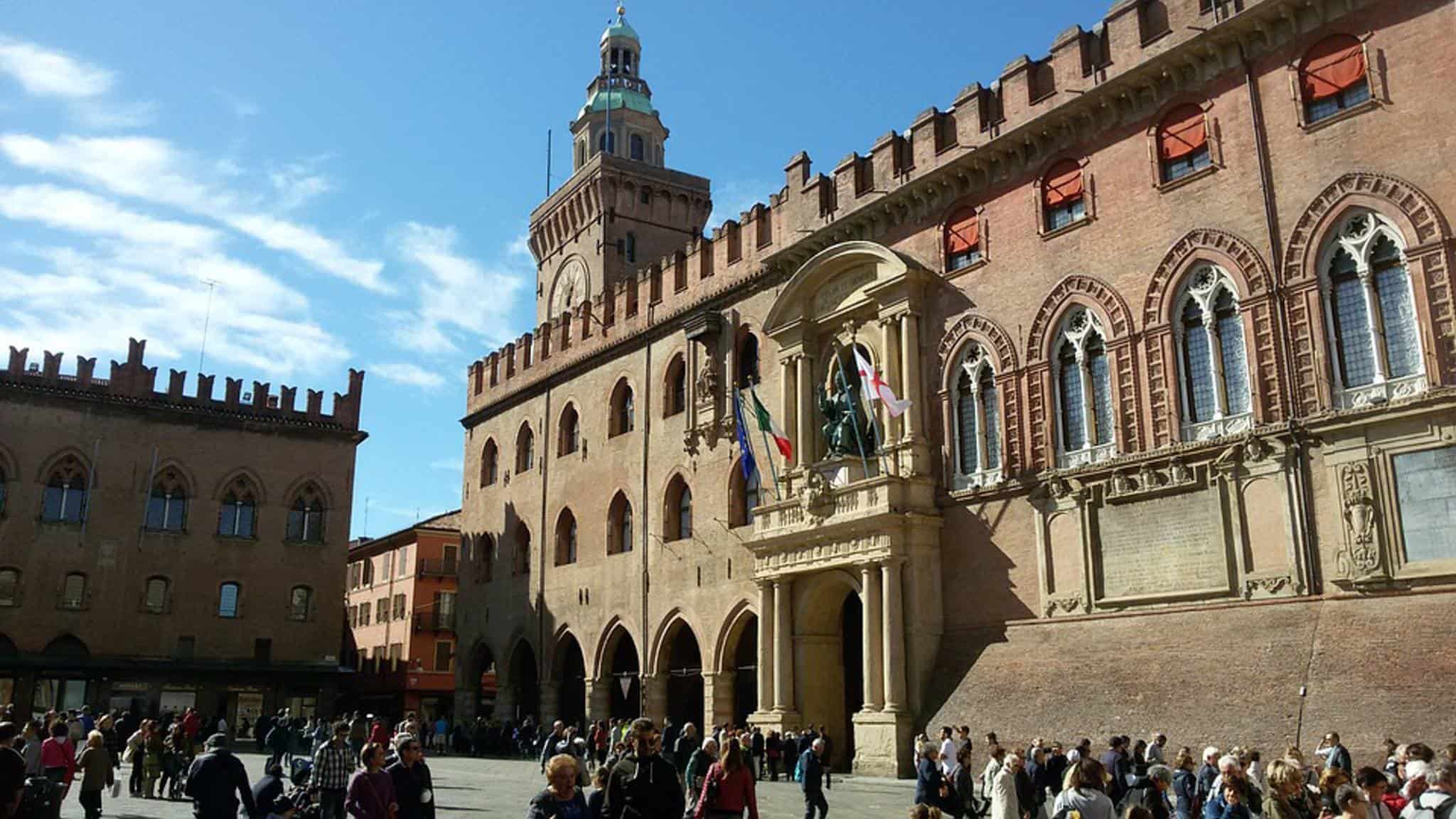 If you’ve been to Italy a few times and you’ve never been to Bologna, you’re missing out. If you’re a food lover, then you’re really missing out. Bologna is known as the ‘Stomach of Italy’ – home of lasagne bolognese, mortadella, tortellini in brodo (tortellini in meat broth) and a whole host of traditional Italian food. Located to the north of Rome, Bologna is land locked and serves as a great location for exploring the north of Italy with both Venice and Florence just a short train ride away. When living in Bologna I got to know the city pretty well, so I thought I would share my favourite insider tips to help you to plan what to do in Bologna during your visit. 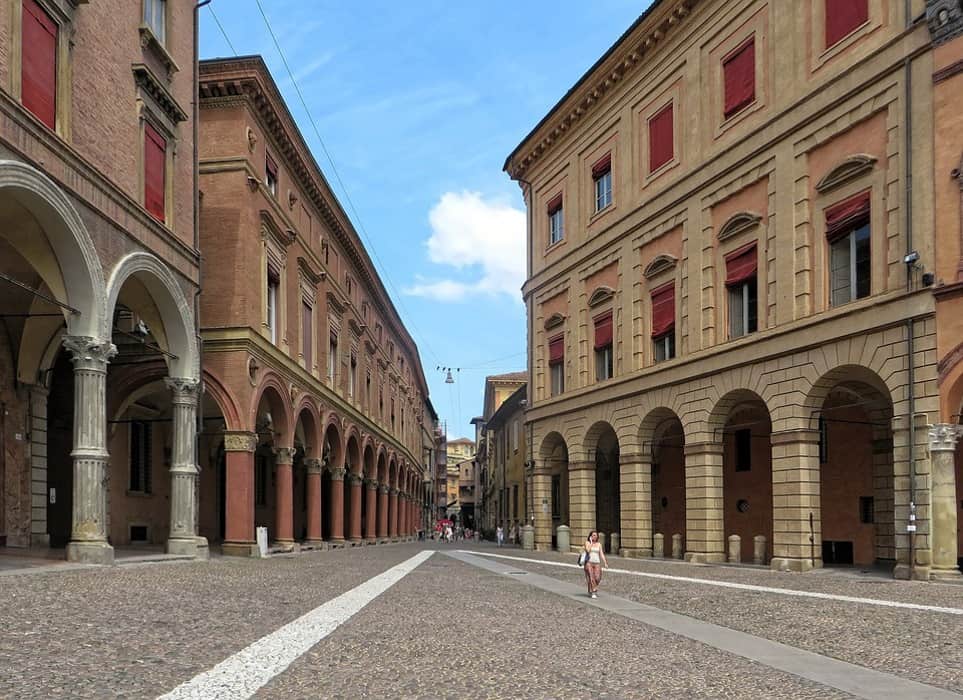 Planning Your Trip to Bologna

Bologna is surrounded by ancient walls, with ten city gates leading to the historical centre of the town. You will see a dramatic difference from being inside and outside the city walls. Don’t judge Bologna until you are well inside its centre, particularly if you are arriving by train.

Bologna gets really cold in winter and can snow, which is beautiful if you like the cold. In summer, because it is landlocked it gets very humid and hot. The best time to visit Bologna would be outside of the summer months (July and August), to avoid the heat. 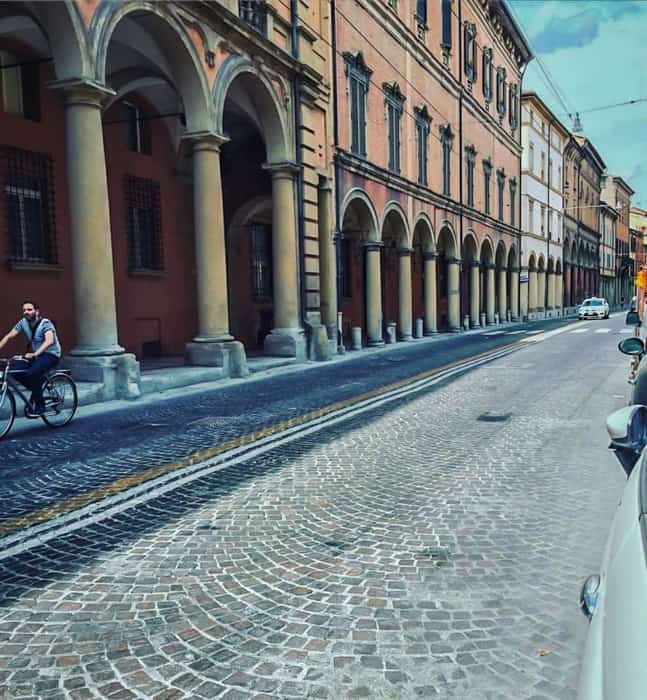 The beautiful architecture of Bologna makes a simply walk a major must-do during your stay. Image © Nat Andrew 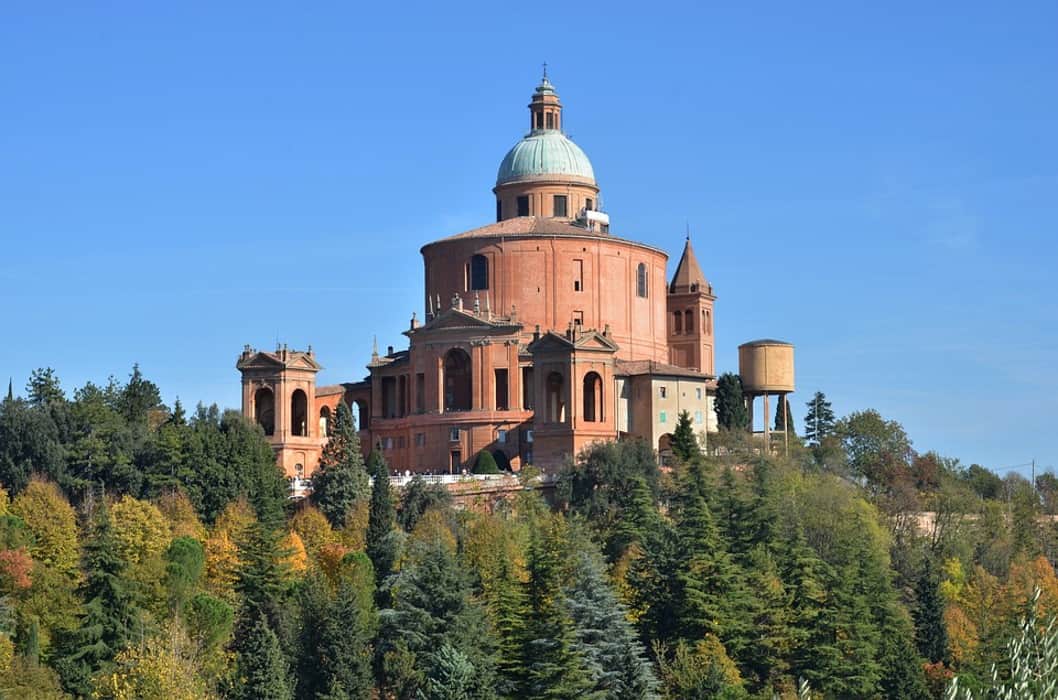 The Santuario di San Luca sits on Guardia Hill overlooking Bologna. Follow the porticoes to find it. It is well worth the climb.

Where to Stay in Bologna

Bologna is fairly small and you can get around very easily by walking or catching the bus. I would not recommend staying near the station. The best area to stay in bologna is on the other side of the city towards ‘Via Santo Stefano’. If you don’t like hustle and bustle, this street will suit you and it is in close proximity to the city centre, shopping and nightlife. 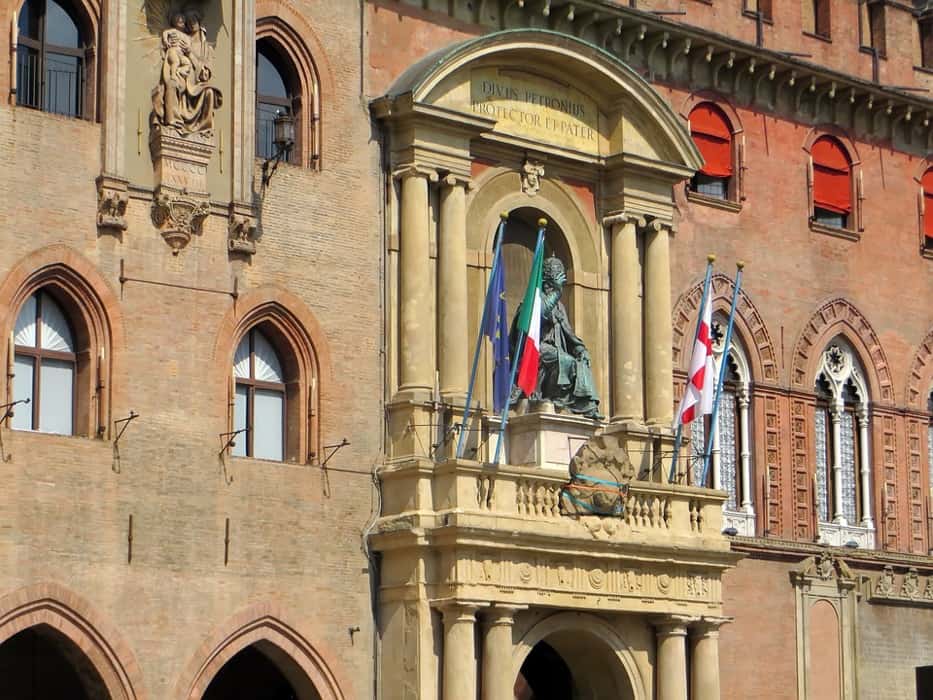 Palazzo d’Accursio is located on the famous Piazza Maggiore in the city centre and was once the city’s Town Hall.

What to do in Bologna

Visit the University of Bologna

The University of Bologna is the oldest university in the Western world, founded in 1088. The street which it is on, ‘Via Zamboni’, has become an eclectic student hub where students from all over Europe and the world converge to drink, eat and party. The street has a number of pubs and clubs as well as fun aperitivo spots where you can meet for a drink and a light meal before dinner. My favourite place for aperitivo was Caffe Zamboni.

Le Due Torri are the two leaning towers that are said to guard and watch over the city of Bologna. If you are in any way claustrophobic, this climb is not for you. A tiny, uneven wooden staircase leads to the top of the towers and it definitely wasn’t made for two-way traffic. Getting to the top will take a little manoeuvring as others make their way down, but the view is truly worth it. From the top, you will see panoramic views of the entire city, including the trademark red terracotta roofs of its buildings. These towers also make a great marker if you get lost as a lot of Bologna’s streets look the same. 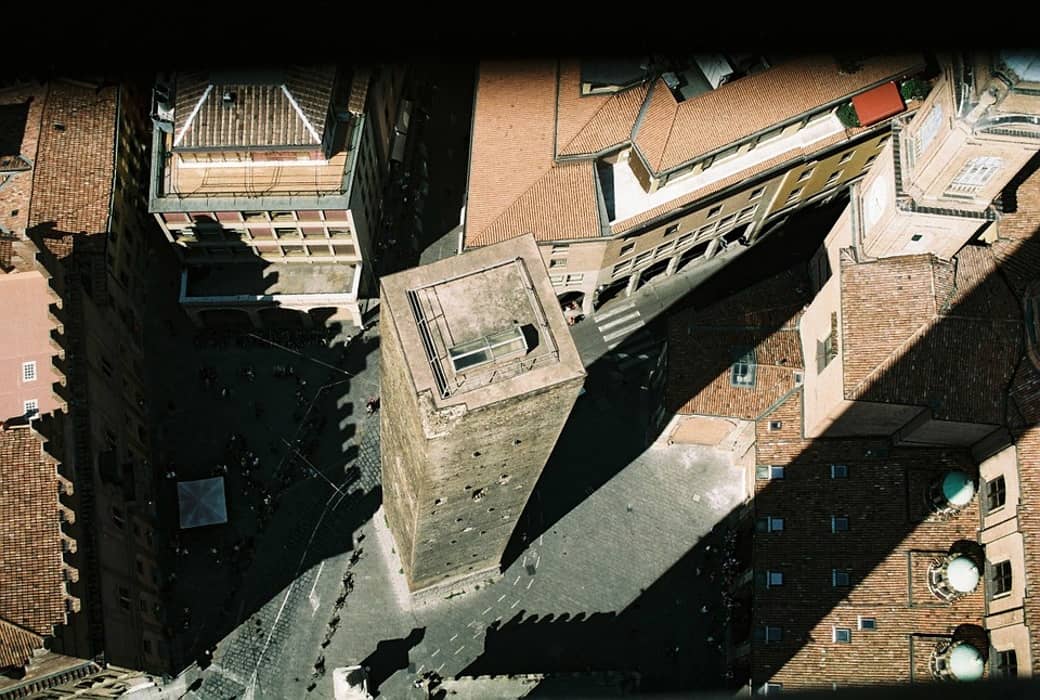 The Asinelli Tower, the tallest leaning medieval tower in the world was built in the 12th Century. Climbing the towers is a must-do when it comes to things to do in Bologna.

Piazza Maggiore is the biggest piazza in Bologna, located in the heart of the city. This is a great place for people watching with an espresso, and to witness the famous Neptune Fountain and visit the city’s main church, Basilica of San Petronio.

Wander down ‘Via Pescherie Vecchie’ (old fishmonger’s street) and Via Clavature and you will see market stalls full of fresh vegetables, fruit and fish. Beautiful salamis and prosciutto hang in the windows of every butcher shop with endless fresh cheeses also waiting to be eaten. This is a great place to buy some local cheeses and deli meats to pack for a picnic in the piazza or the city’s beautiful park, “Giardini Margherita”. 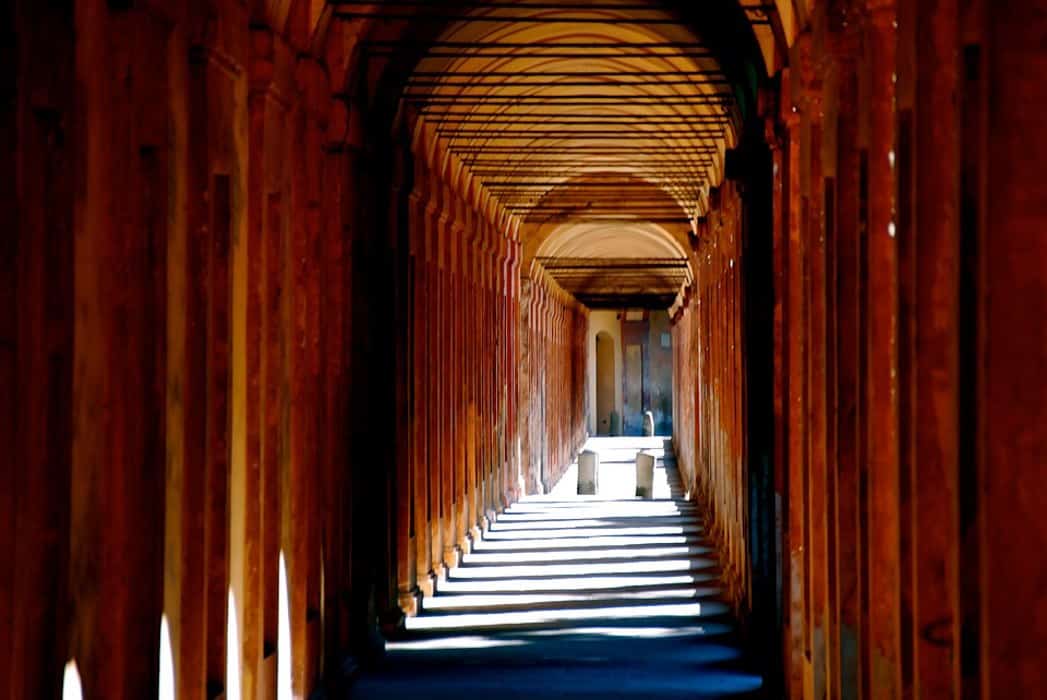 The famous porticoes are one of the most distinctive features of Bologna and carry you for kilometres, protected from the elements around the city.

Explore the Porticoes of the City

Amazing porticoes line either side of Bologna’s roads. They allow you to explore the city, completely under cover (especially useful if it’s raining). These porticoes are of great historical significance and really are one of the distinctive features of Bologna. You can follow the porticoes out of the city into the hills of Bologna and to the Basilica di San Lucas. It’s a 3.5 kilometre walk, but well worth it for the beautiful views. It’s also a great way to walk off all the pizza, pasta and gelato you will likely consume during your stay.

Go Shopping in the Centre of Bologna

Via Ugo Bassi and Via Independenza are the main streets for shopping in Bologna, with great clothing and shoe stores aplenty. For more upmarket designer stores wander through the streets that lead off from Piazza Maggiore.

Visit the ‘Archiginnasio’ or the Anatomical Theatre

For something a little different visit the ‘Archiginnasio’ or the Anatomical Theatre located near Piazza Maggiore. This is an old operating theatre medical students used to practice in centuries ago and a place where some of the first scientific studies on the human body took place.

Ask a local about the ‘7 Secrets of Bologna’

There are seven secrets that the city of Bologna holds and you can discover all of them by exploring its streets. Did you know there is a tiny window on one of its streets where you can see underground canals? If you look through the window you will think you are in Venice. Did you know Bologna also has ‘whispering walls’? Have fun discovering the rest for yourself. 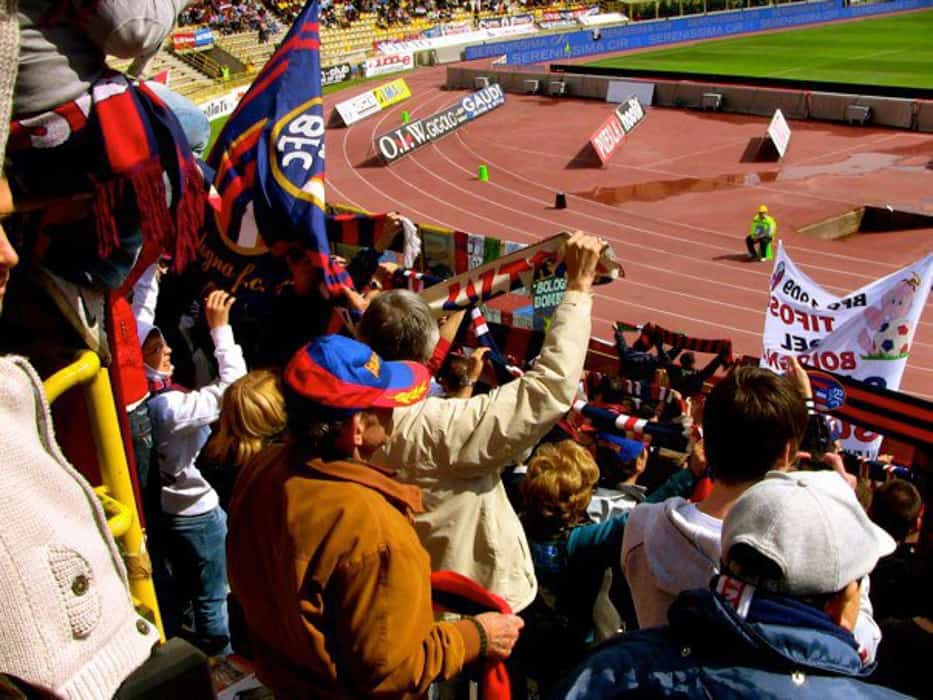 Head to a Soccer Match at Stadio Dell’Ara and soak up the atmosphere with the local super fans. c

Head to a Soccer Match at Stadio Dell’Ara

Italians are mad about soccer and you will love the experience of being among the crowd. You may see particularly passionate fans known as ‘The Ultras’. Some teams have such fierce rivalries that they need to be separated and seated on different ends of the field. Your best bet is to sit in the centre of the field if you don’t want to be right in the thick of it. The stadium is about 3.5 kilometres from the city centre and you can take the bus from the train station and get off at stop ‘Stadio.’ 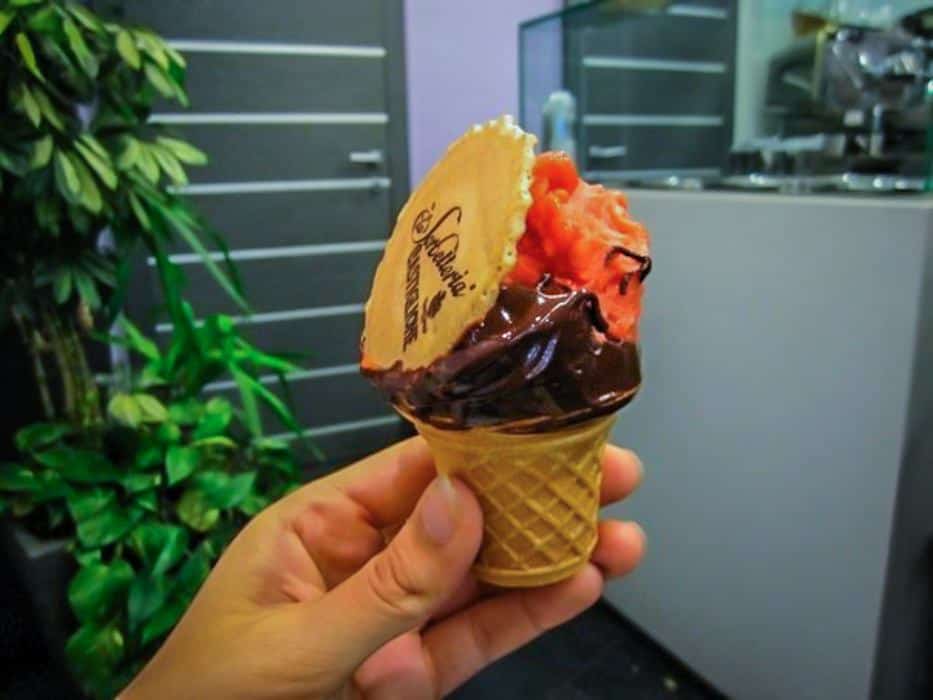 The gelato at Sorbetteria di Castiglione in Bologna may just be the best you will ever have. Image © Nat Andrew

The Best Places to Eat in Bologna 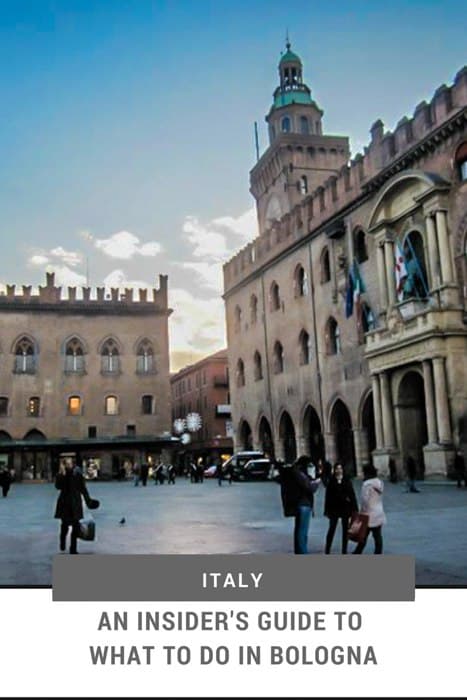 Natalie is a Senior Social Media Producer and Product Manager who has worked across Australian media brands such as PLUS7, 7News, The Morning Show, X Factor, Home and Away, The Daily Edition and Australia’s No.1 Breakfast show, Sunrise.

During university, she lived and studied in Italy where she took full advantage of cheap Ryanair flights. That year she travelled extensively through Europe and has continued her love of travel ever since.

Natalie enjoys unplanned adventures and hates to travel with a map. She also swears by getting her hair cut at the beginning of her trips – hairdressers have all the best tips for exploring a city

« Yoga Inversions for Beginners: A Step by Step Guide
A Guide to Airlie Beach: The Gateway to the Whitsundays »