Exotic holiday snaps of tourists posing while riding elephants in Thailand have inspired many visitors to join the pilgrimage to the country, hoping to get up close to the beautiful animals. It is only in the past few years that the suffering that these giants endure within the industry has been exposed. Thankfully, tourists’ understanding is increasing, allowing people to make more informed decisions about elephant tourism. We asked elephant expert Dr Megan English how to find an ethical elephant sanctuary in Thailand. 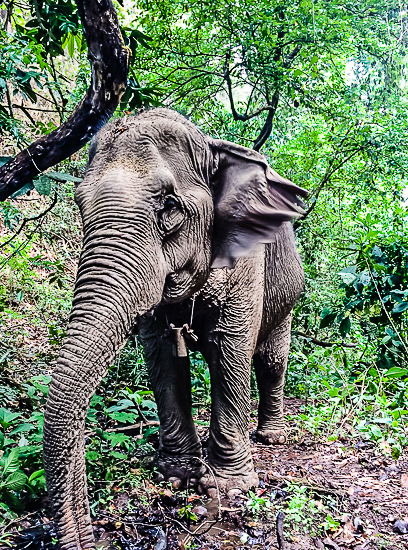 There are an estimated 2,700 elephants in captivity in Thailand, with only 2,000-3,000 remaining in the wild. Image © Dr Megan English

How to Find an Ethical Elephant Sanctuary Thailand

Currently in Thailand, captive elephants are classified as commercial animals under the Beast of Burden Act 1939. The owner has the right to trade and use the animal at will; they have the same rights as stock animals. There are an estimated 2,700 elephants in captivity in Thailand, with only 2,000-3,000 remaining in the wild. Wild elephants are protected under the Conservation Act 1992. Despite this, the wild population continues to diminish due to wild elephants being poached for their tusks, caught for training in captivity, as well as anthropogenic disturbance such as habitat loss. 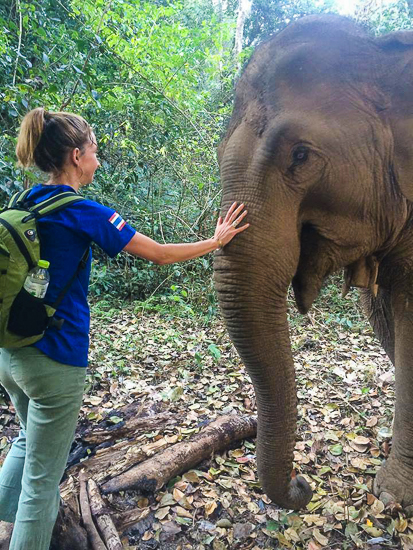 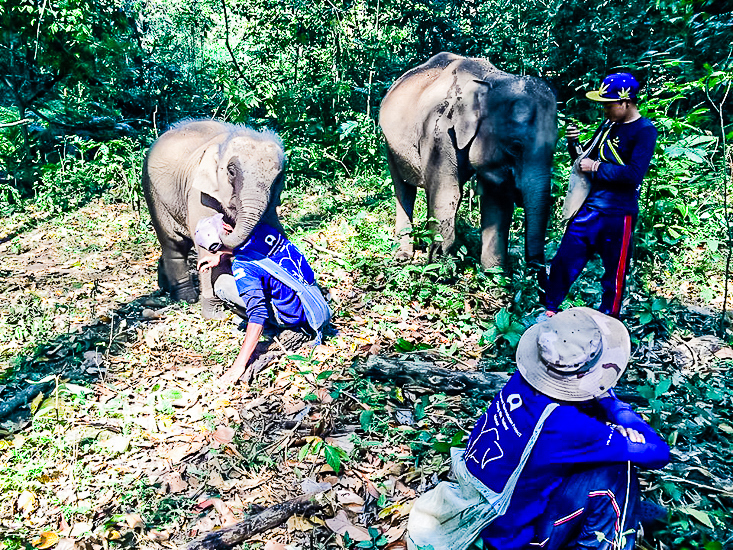 Captive elephants were predominantly used in the logging industry until 1989 when logging in natural forests in Thailand was banned. While this was a positive change, it resulted in many Thai elephants and their mahouts (handlers) being out of work.  This logging ban coincided with a rapid increase in tourism where more than half of these ex-logging elephants were subsequently shifted. 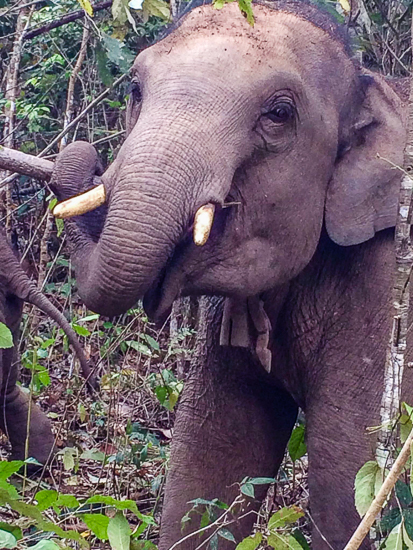 A fully grown animal requires 10% of its body weight in forage per day. Image © Sulaiman Ismail

The most unethical forms of elephant tourism in Thailand tend to be those where elephants are used for begging on busy city streets, performing circus-like stunts such as tightrope walking, playing soccer, painting and riding tricycles. Training for these activities often involves negative reinforcement; usually the act, or threat, of punishment during training. 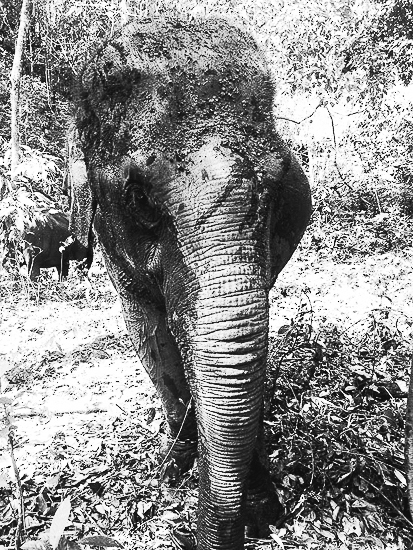 Tourists’ understanding of the plight of the Thai elephant is essential for their survival. Image © Dr Megan English

Elephants carrying tourists on their backs in often heavy and poorly designed seating is also an issue of contention. Elephant welfare advocates have differing views of what is considered acceptable regarding elephant-use in tourism, particularly for riding.  Many believe elephant rides, if carried out within reputable organisations where elephant welfare is prioritised – bareback riding, offering rides sporadically throughout the day, positive reinforcement training methods where proper medical and nutritional care provided, is acceptable. As opposed to the alternative, where riding methods compromise welfare, such as the use of heavy seats, rides undertaken repeatedly throughout the day under the hot sun, inadequate medical and dietary care, and negative reinforcement training methods. On the other hand, there are those that are opposed to any form of elephant riding as they believe this is an unnatural behaviour, enforced upon elephants for the purposes of human entertainment. One must bear in mind, however, that if all elephant riding was banned – a huge industry in Thailand – this would result in more elephants and their mahouts being out of work.  An elephant is costly to care for, a fully grown animal weighing between 1500 and 3000 kilograms, requires 10% of its body weight in forage per day, so at least 150-300kg of forage needs to be provided daily.  This article is not taking either side of the argument, but rather giving both perspectives allowing the reader to draw their own conclusions on what they feel is ethical. 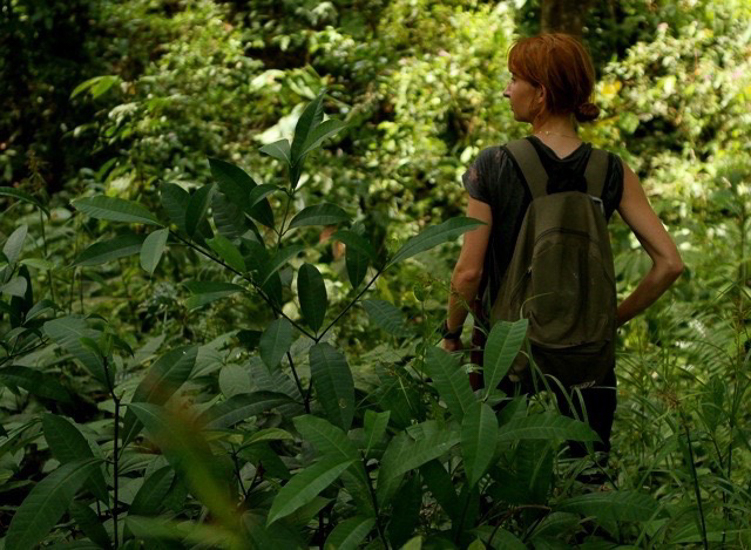 Dr Megan English has been carrying out behavioural and ecological research on captive and wild elephants for almost 8 years. Image © Stephanie Hunt/Habari Productions

Thankfully, an industry is growing where ex-camp or logging elephants are being transferred to areas where each day is spent foraging, playing and socialising with other elephants in natural settings with reduced human interaction. Visitors can now pay to observe the elephants in a semi-natural environment as opposed to watching elephants perform circus-like stunts solely for the entertainment of humans.  Some organisations such as GVI and Think Elephants are conducting important research about elephant behaviour and cognition where, for example, this information can be used to benefit captive and wild populations, particularly those impacted by human-elephant conflict. As more tourists are attracted to a more ethical form of elephant tourism hopefully more organisations will be encouraged follow suit. This would subsequently attract more mahouts with their elephants from camps, street begging, circus performances, to a life where not only the mahouts are given ongoing, alternative employment with their elephants, but where the elephants’ welfare is the top priority and tourists can observe these creatures displaying normal behaviours with minimal stress. 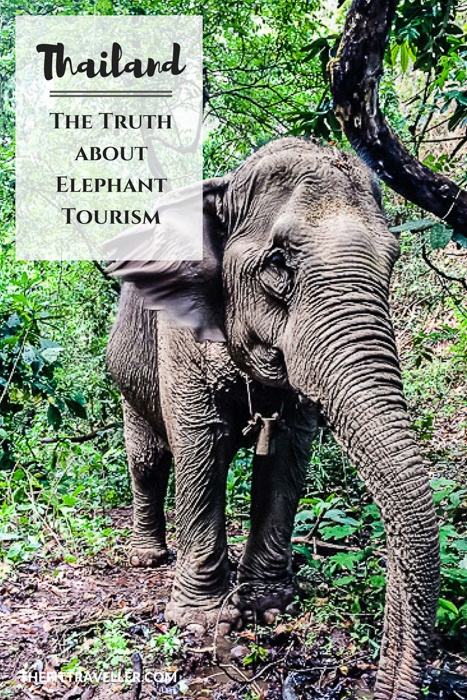 Dr Megan English has been carrying out behavioural and ecological research on captive and wild elephants for almost 8 years. She has lived throughout Asia, including Sri Lanka, Thailand, Indonesia, Philippines and Malaysia. Her field research on elephants has involved spending lengthy periods living in isolated areas in both Borneo and Thailand.  In Borneo, her research involved studying a population of 200 wild elephants and gathering behavioural and ecological data for a PhD in Ecology and Biodiversity. Megan is now based in far Northern Thailand, in a small Karen hill tribe village called Huay Pakoot. Her organisation assists with elephant rehabilitation and helping mahouts and other villagers establish alternative livelihoods. They also teach villagers and school children English and hope to increase their awareness of elephant welfare and conservation in Thailand. As a Scientific Officer, she develops research to monitor the behaviour of the reintroduced elephants, as well as to train interns and volunteers about elephant behaviour, ecology, welfare and conduct scientific research that will benefit wild and captive elephants in the future.