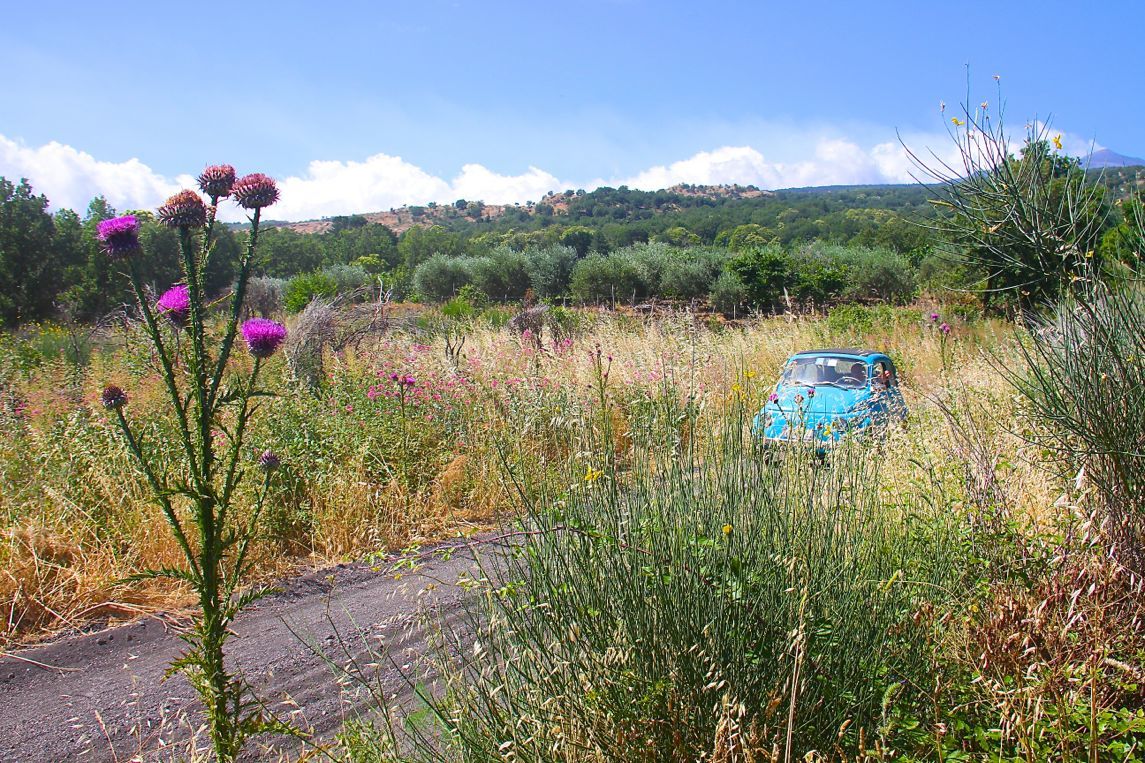 A honeymoon is often a time people use to splurge on that one big fantasy holiday. Whether it’s an expensive hotel room with a killer view, a private bungalow hanging over the water, dinner at a Michelin-star restaurant or a fancy set of wheels. The Hubby and I stretched our money across a relaxing month in Europe. It wasn’t necessarily about the fanciest hotels for us on this trip. We took things slow, ate really good food, drank a lot of great local wine and had a few mini adventures along the way. That included our Sicily day trip. While staying in Taormina we went on a tour to Mount Etna and it was one of the best days I’ve had travelling. 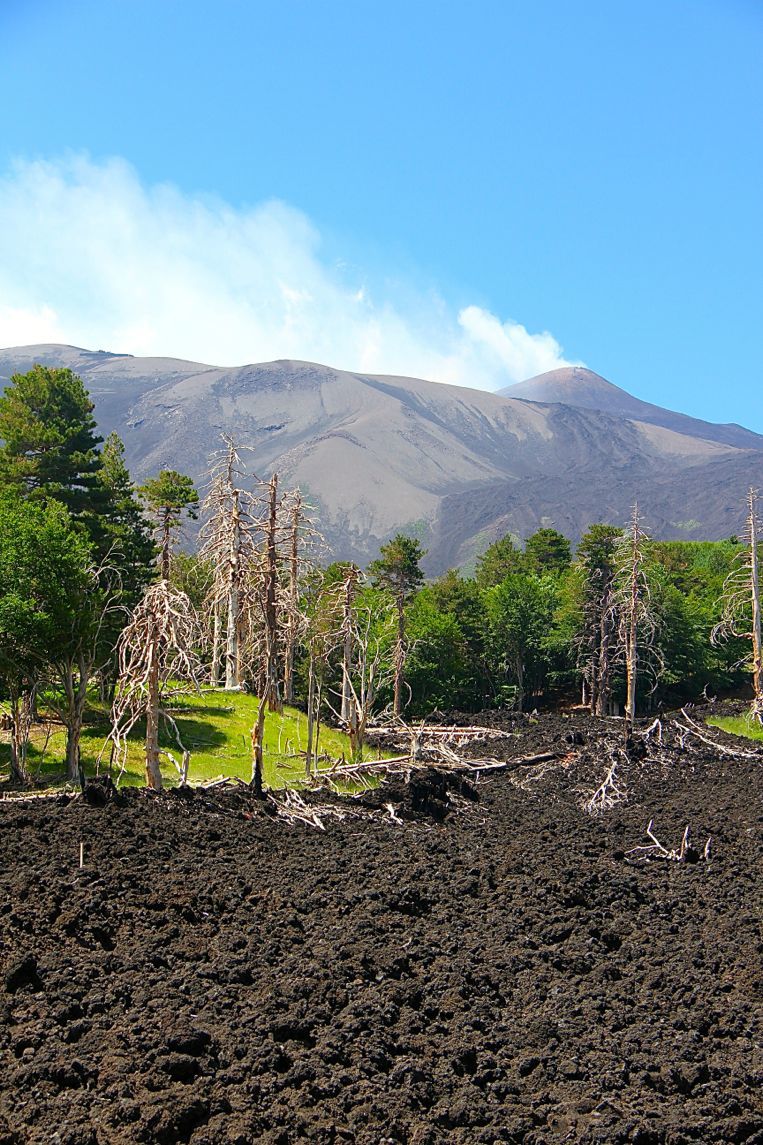 Mount Etna sits on the east coast of Sicily, outside of Catania. She’s also got a bit of a temper as Europe’s most active volcano, with eruptions almost every year. Catania airport was closed due to an eruption the week before we flew in to Sicily, so it was with excitement and a little trepidation that we went to go and see Etna up close.

Wherever you move around the town of Taormina, Etna is always watching. The scale of the mountain is most obvious when you’re laying on a daybed at the beach. The volcano towers at more than 3,000 metres (11,000 ft) above sea level, in the distance. There’s often a plume of black smoke hanging over the craters. Mysterious and moody Etna really adds to the magic and beauty of Sicily.

After our guides insisted we needed a huge 4WD for the rugged drive up the mountain, we had a giggle with we passed a tiny old blue Fiat burning down the black dirt road at twice our speed, as we wound our way up the mountain. But once the driver turned off into the pine forests, it all made sense. 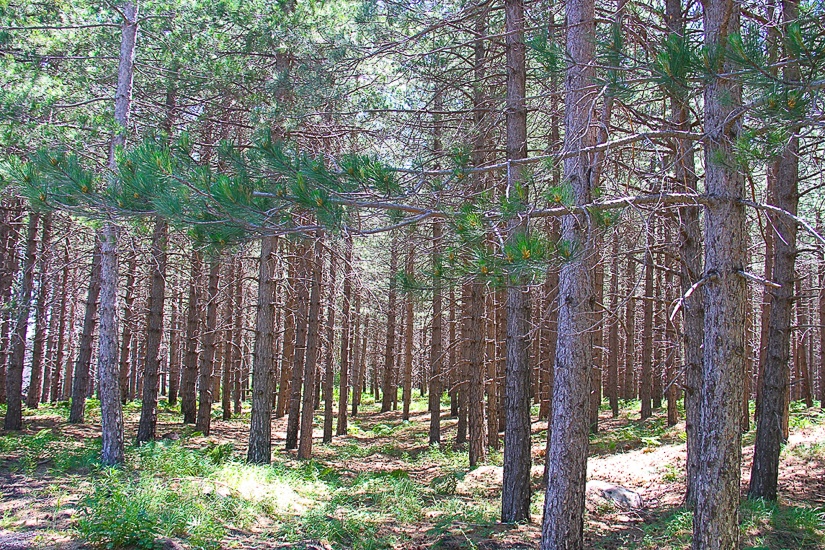 The incredible smell is what hits you first when taking the off-road route up to Etna. Stunning pines line each side of the road, the air smells damp and apart from the occasional picnic party, you really have the place to explore, privately. As you can expect, there aren’t too many locals that want to live this close to an active volcano, so you’re really just out in nature. We stopped at a view point of sorts, with a clear corridor offering a stunning vantage point back down towards Catania, while at your feet, you walk on the ashy volcanic soil and remnants of an old lava. 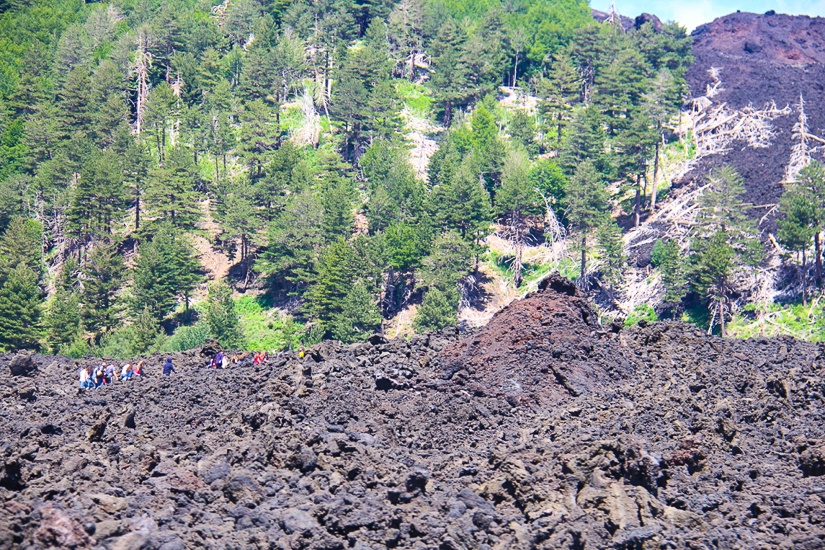 Back in the car and we travel through the eery lower Etna. The plane has in many parts been decimated by eruptions of the past, with mountains of leftover blackened rock covering much of the landscape. There are a handful of shops and a restaurant that service the tourists in summer hiking the area. In winter, the peak is covered by snow so Etna becomes a ski resort too. 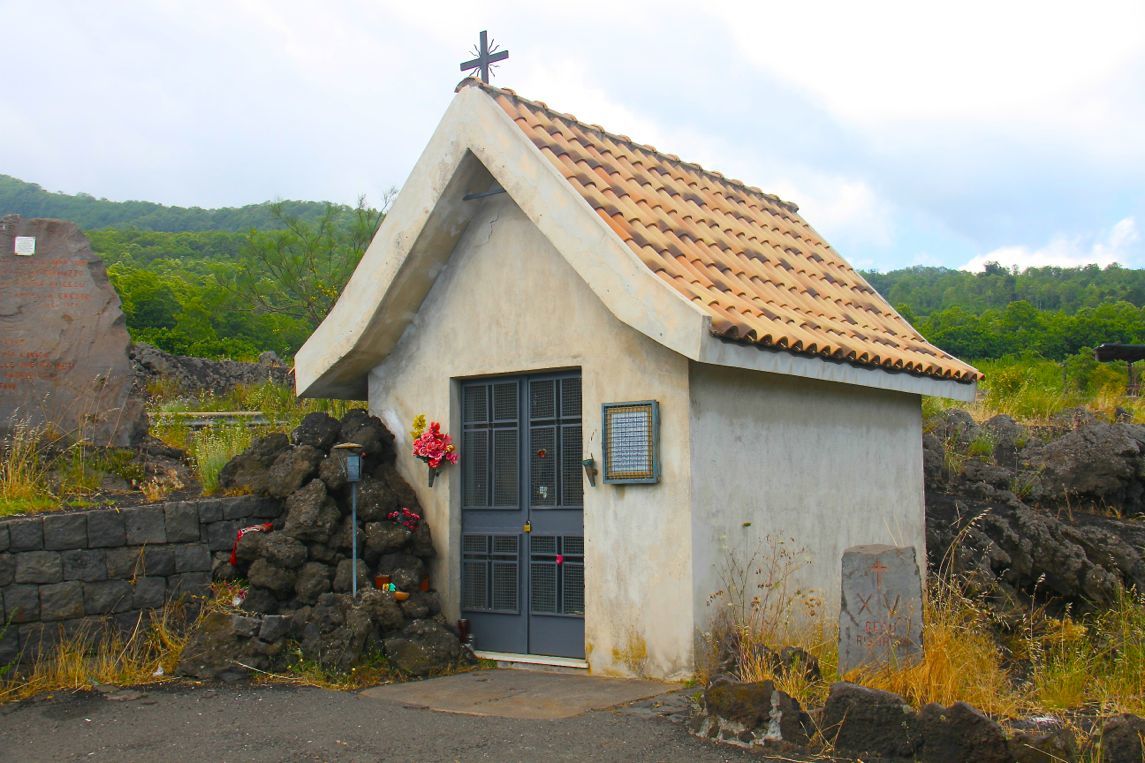 Winding our way back down the mountain we come across the little church that could. As you can see, the tiny chapel, Cappella del Sacro Cuore (Chapel of the Sacred Heart), withstood an eruption during the 1970s. It engulfed everything in the village around it. The lava still sits at its front door. Believers offer the explanation that it was protected; a divine miracle. Further down and we come across a road has been cut in two by another eruption. You really get a sense of the scale of a lava flow when you’re standing on one. It’s incredibly intimidating. 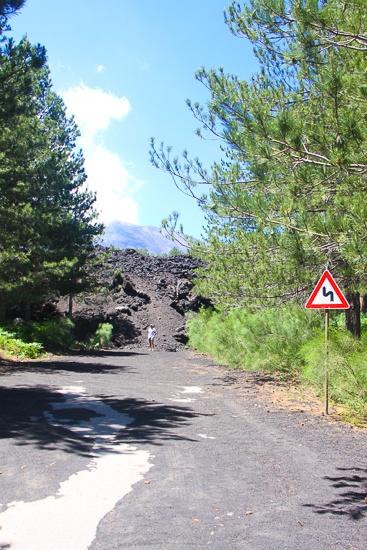 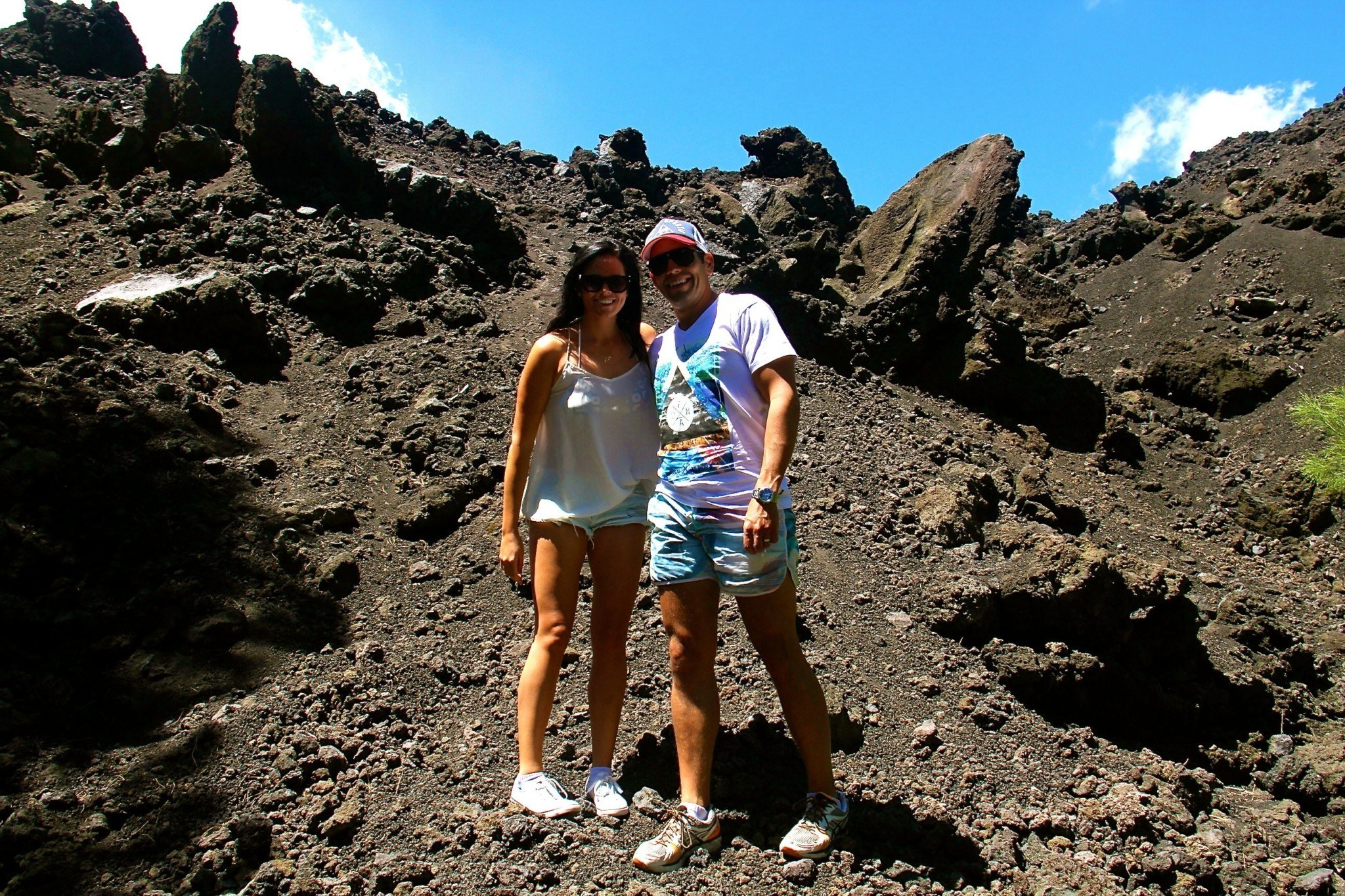 Posing with The Hubby on a old lava flow that cut off the road in the shadow of Mount Etna. Image © Skye Gilkeson

While the prospect of having an active volcano right at your doorstep could be a bit disconcerting for most, the volcanic conditions are perfect for grape growing. Despite the risks, the altitude and steep terrain growers proudly produce some of the best wine in the region. Gambino winery is the ideal lunch spot serving up a local drop with a panoramic view of the vines. Image © Skye Gilkeson

We stopped by Gambino Winery for a tasting and some lunch. Gambino Wines is family owned and run. Not surprising in Sicily really. I have to say, it was one of the best and most thorough tastings I have ever experienced. 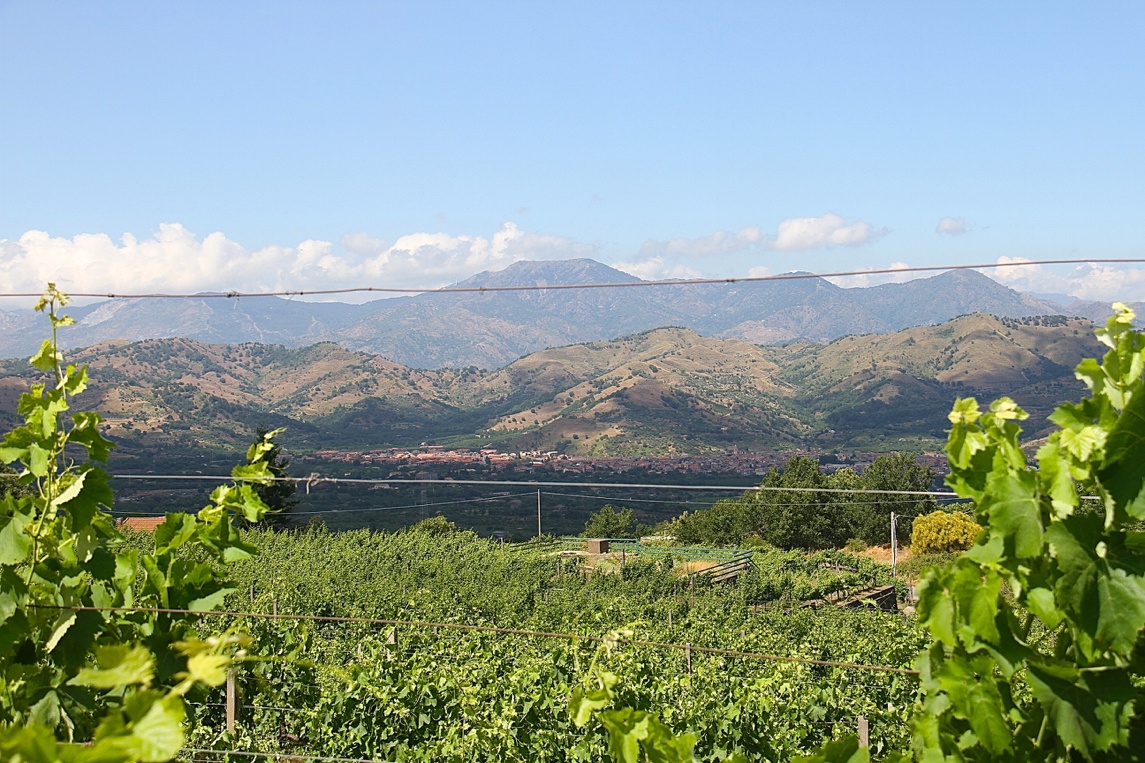 The winery sits on the eastern side of Etna with panoramic views back down to Taormina. The combination of the mineral rich volcanic soil and it’s high position, perched at 800 metres above sea level makes growing conditions perfect their dry red wine made from nerello mascalese, and dry whites from Carricante. As the vines are old and demanding and the soil shifts, it’s hard going for growers in Sicily, but there’s a distinct passion for it here.

The whole family seems to exude that passion at Gambino. Different members of the family came to check on us throughout or time there, telling us their favourite wines. We were also offered a personal tour of the barrel room by one of the owner’s sons, which I find is rare, even at boutique wineries these days. 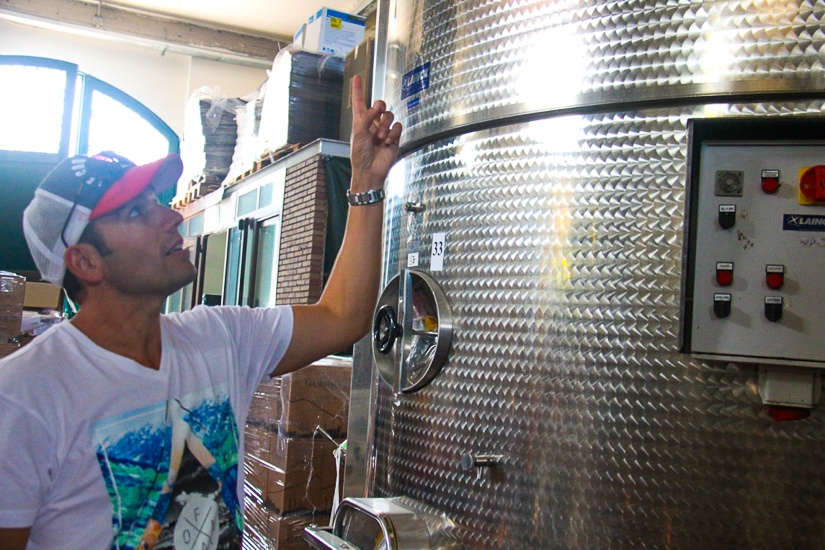 Our tasting came with plates of delicious locally sourced meats, cheeses, vegetables, bread, coffee and soft pistachio biscuits. There were instructions on which food to eat in partnership with each drop. I have to admit, we did get slightly carried away with the wine and conversation and veered off the strict scheduled order, but both the food and wine was incredible. 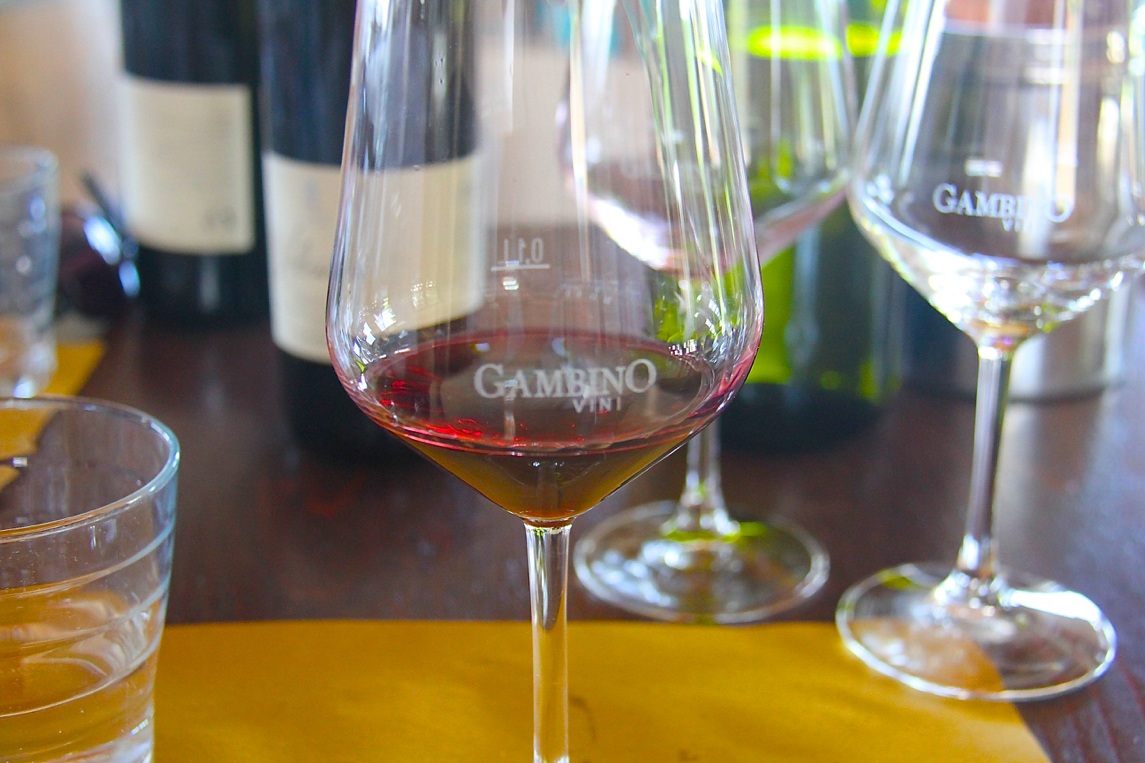 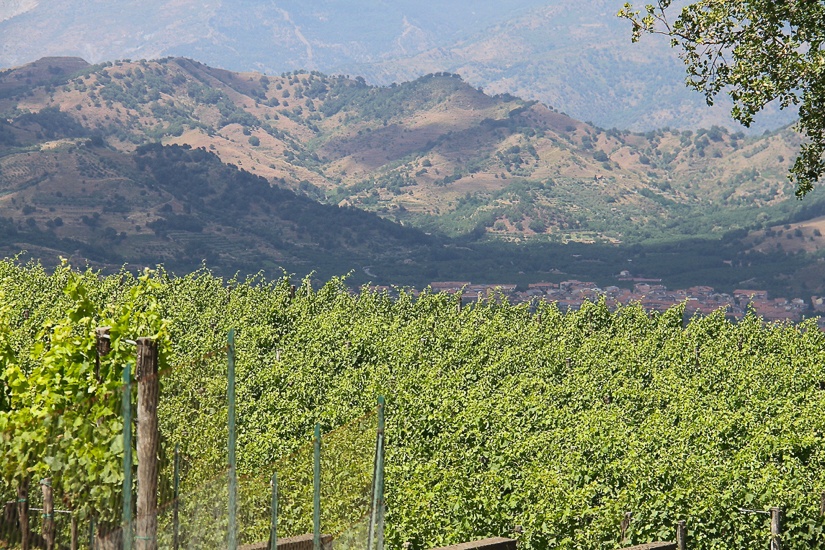 Wine tasting with a view at Gambino Winery in Etna. Image © Skye Gilkeson

Our day trip to Etna was a feast for the senses. From the beauty of the unique landscape, to the delicious Sicilian delicacies and the warmth of the people, it really was a day to remember and I would highly recommend it. 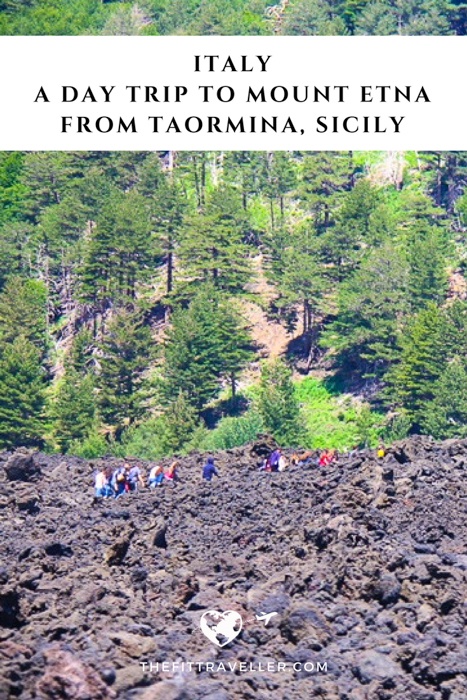 « Stop! Zoodle Time
How to Detox Your Body at Home »