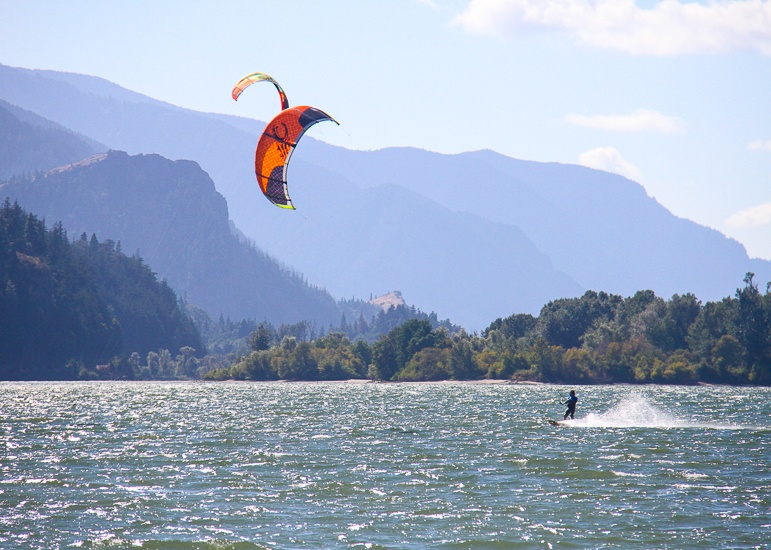 When most people plan a trip to America; Los Angeles, New York, Las Vegas and San Francisco tend to take the top spots on the itinerary. But if you’re looking for a little adventure, beautiful scenery and undeniably delicious local food, consider their cool, hipster cousin, Oregon. Oregon is one of the most proudly unique places I have ever travelled to. Portland even has a saying, “Keep Portland Weird” and it truly characterises the city and the state. That’s because in the case of Oregon, weird translates to interesting. 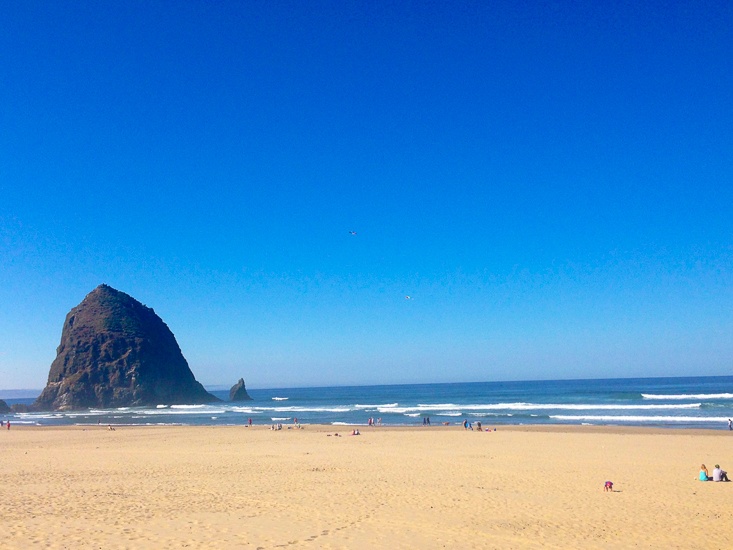 A few fun facts about how Portlanders ‘keeps it weird’, for you: you can hire a goat to mow your lawn for $US300 a day instead of buying a lawnmower; every household is allowed to keep a goat and up to 3 chickens; there are Portland vampire clubs; Portland proudly opened America’s first cat cafe where you can grab a coffee and pat a cat; and there are even locks to secure your hula hoop around the city, while you take a break from hooping for a local brew. The list is goes on. 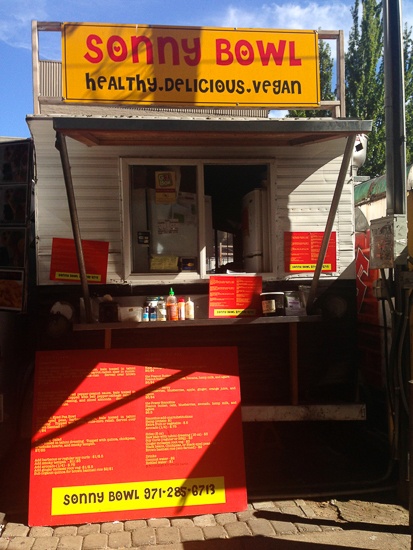 One of the 700 famous food trucks in Portland, Oregon. Image © Skye Gilkeson

Beyond the quirky farm-to-fork cafes and more than 700 food trucks, you’ll enjoy tax-free shopping and some great people watching. Then there’s the beer. With more than 50 microbreweries, Portland has more than any other city in the world, right now, earning it the name Beervana. 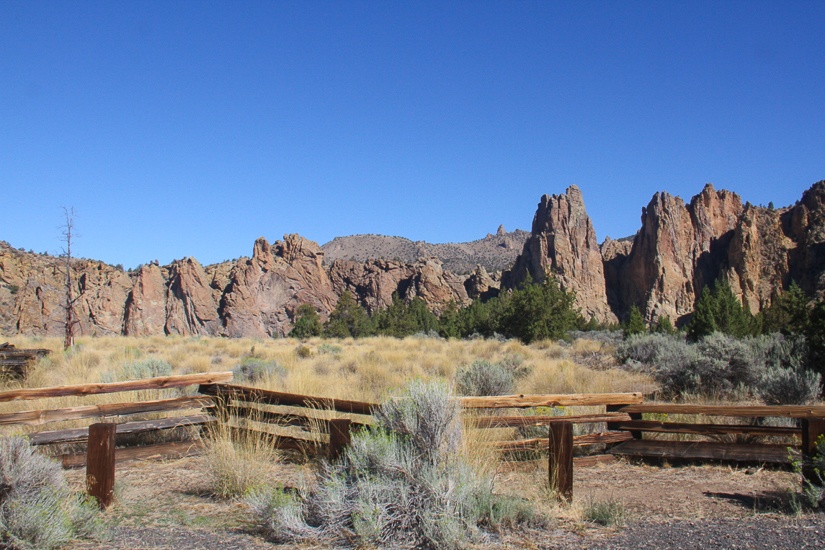 Travelling outside of Oregon’s biggest city requires some careful consideration as there’s so much to see and it’s all so different. It’s a case of choose your own Oregon adventure. From one part of the state to the next you’ll find new scenery, new attractions and new activities, but the same friendly, welcoming laid back people.

The Seven Wonders of Oregon, will likely guide your road trip planning, with each drive fuelled by tasty craft beer (not for the driver of course) and fresh food finds along the way. The Seven Wonders of Oregon include Columbia River Gorge, Mt. Hood, The Oregon Coast, Painted Hills, Smith Rock, The Wallowas and Crater Lake (the deepest lake in America). I was lucky enough to see most during my week of road tripping. 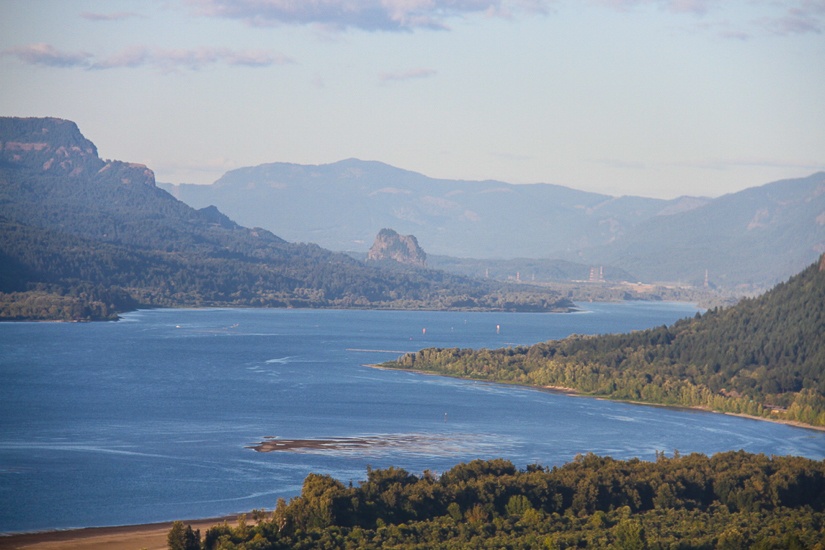 Heading east out of Portland you’ll reach the Columbia River Gorge. It’s the largest National Scenic Area in America. When you wind your way along the road, surrounded by brilliant green pines, you’ll understand why. It’s hard to believe you’re just outside a city of about 600,000 people. 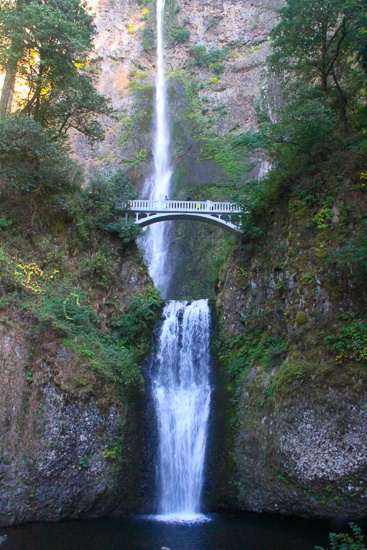 Multnomah Falls is just 30 minutes down the road and the perfect port of call if you’re travelling with kids or you’re tight for time and can’t venture too far from Portland. The falls are only one of 90 waterfalls in the gorge and they run year-round, fed by rainwater, an underground spring and snowmelt. Take them in from below or climb the bends to the Benson Foot Bridge for a closer look (built in 1914). 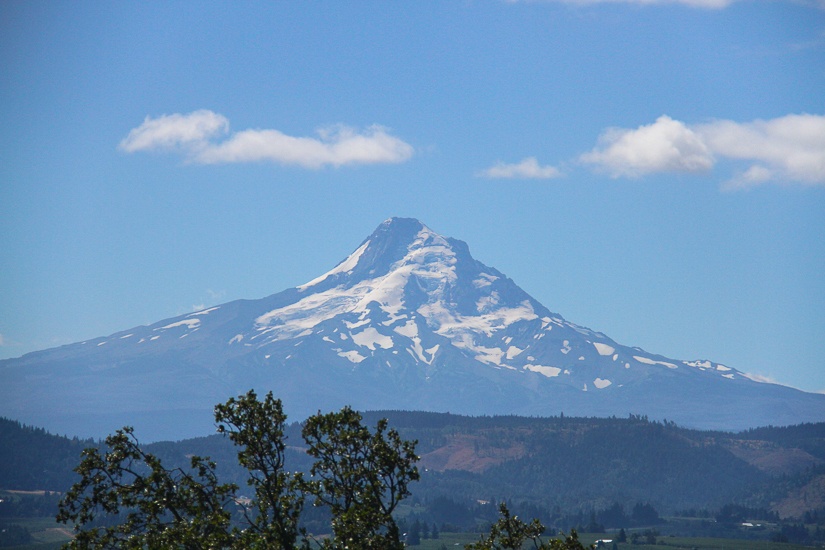 Mount Hood overshadows The Fruit Loop below. One of the Seven Wonders of Oregon. Image © Skye Gilkeson

Continue north-east down the gorge towards Hood River. You won’t be able to miss Mount Hood towering over you as you drive. Mount Hood is the highest point in the state and home to the only year-round ski resort in North America. Thousands of acres of orchards and vineyards sit at its feet, making up the Fruit Loop drive that winds down to the town of Hood River. The Fruit Loop gets its name from the local producers who grow fresh fruit and vegetables and even produce local wine. Hood River is located on the Columbia River. Known for its artisan food, beer and craft shops, it’s the perfect place for lunch or to stretch your legs.

Crown Point is a must see either during the day or at dusk. It offers a panoramic view of the Columbia River and catching the colours changing as they hit the water is just a magical way to finish off a day of sightseeing. 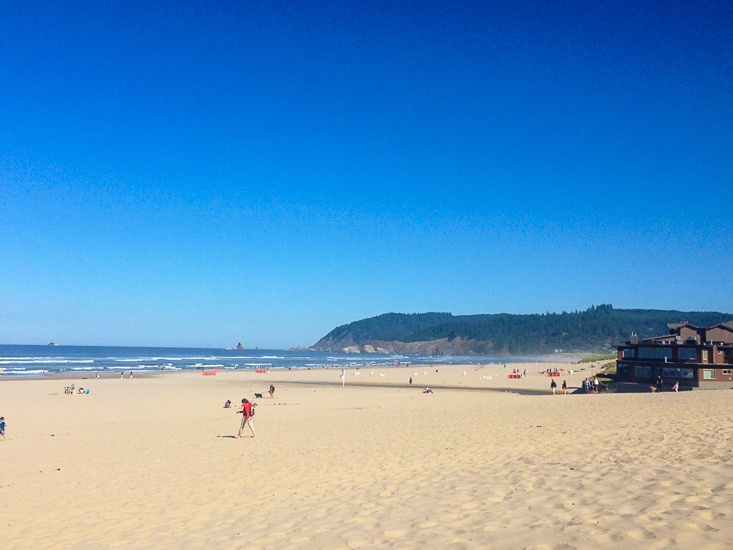 If it’s a beachside destination you’re looking for, drive to the Oregon Coast, 90 minutes from Portland. On the 584km shoreline where the Pacific Ocean meets the coast, you’ll find Cannon Beach. It features tide pools, hiking trails, surfing spots and whale watching and is also a big tourist draw.

The white wooden beach houses that line the narrow streets, give the town a Californian feel, but it’s the beach that sets it apart. When you hit the sand, you’ll see Haystack Rock. The giant monolith is 71 metres from the sand, towering over tide pools below. Ecola State Park, is the other natural landmark that is unique to this spot. Both natural wonders have been featured in movies like Twilight, The Goonies and Point Break.

While you might be able to catch a wave and some rays, come prepared for a chillier experience. The day I spent at Cannon Beach, conditions turned very quickly. Blues skies and a clear view down to the rock one minute, then a mist rolled in which completely disappeared the beach for hours, before huge Haystack revealed itself again in the afternoon. If you find it’s a cooler day, simply savour the view and the local fare with a glass of local pinot at the Wayfarer Restaurant just off the sand.

There are plenty of options to work off all the feasting. 7% of the city’s commuters in Portland ride to work. There is more than 500 kilometres of bikeways in the city alone. They love bikes so much in fact, they host the annual Naked Bike Race, offering sightseers a little more local flare than they may plan for. 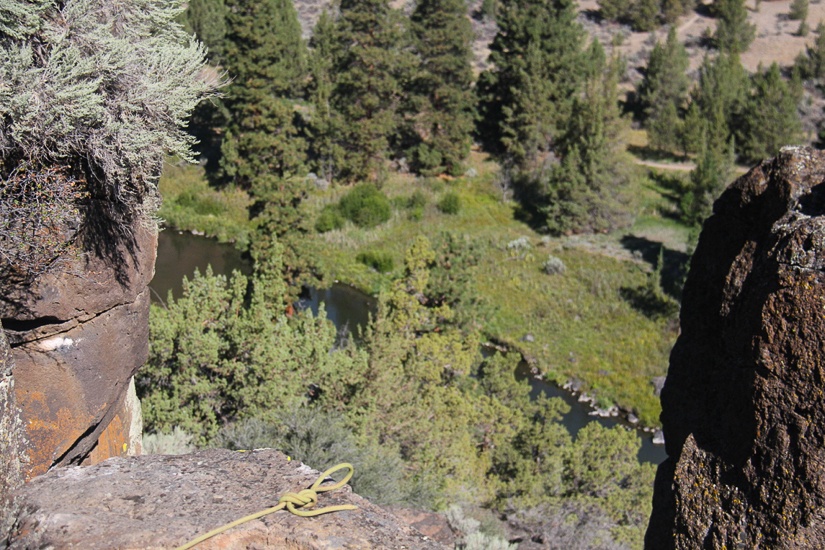 Climbers and hikers, jump in the car for 2.5 hours bound for Smith Rock State Park. The cluster of rocks attract some of the world’s best climbers, with over 1800 climbing routes to test your skills (1000 are bolted). Boasting 300 sunny days a year, the heat can be unforgiving, so if you’re planning to push yourself, get started early. Novices can hire some help in the form of a climbing guide. 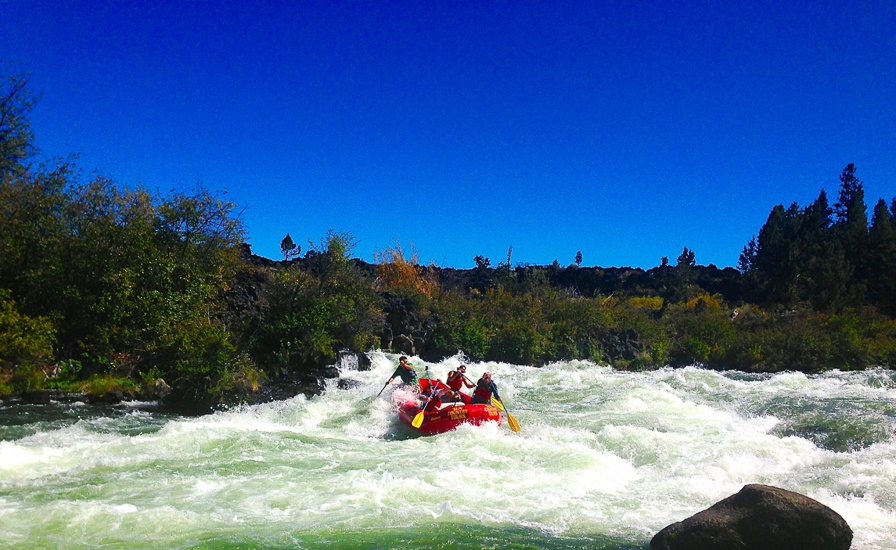 On your way back to Portland, cool off with some whitewater rafting in the Deschutes River. The runs are reasonably short and it’s safe enough to take the kids down. We had a handful of fit 20-something guys from Sun Country Tours show us the way. 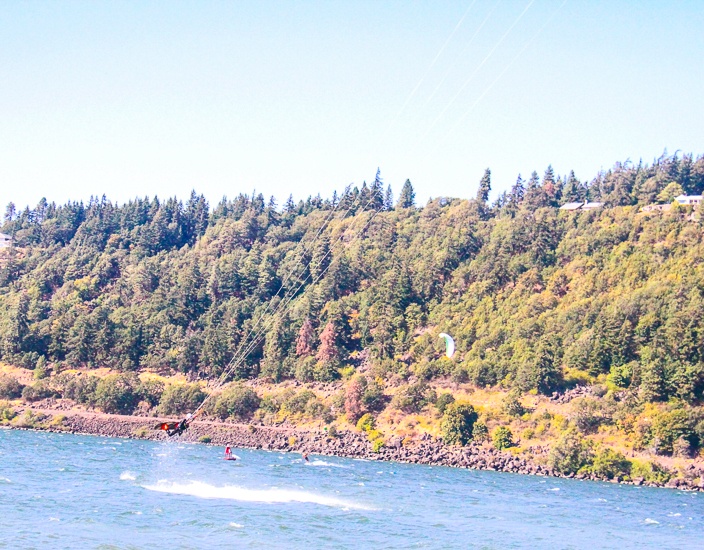 For windsurfers and kite boarders, the Columbia River is calling you. A mecca for boarders from around the world, it’s a bucket list destination for either sport. The powerful winds that travel down the gorge to the river make the conditions perfect for even the most accustomed to the harness.

The water at Cannon Beach can be chilly. If you’re brave enough you can hire surfboards and even skim boards form the local shop. If you’re happier on the sand, pick up a Funcycle (warning: it’s harder than it looks).

These are just a handful of experiences you’ll discover in Oregon. It’s the perfect destination for families, fit travellers and foodies alike – offering something for everyone’s appetite. 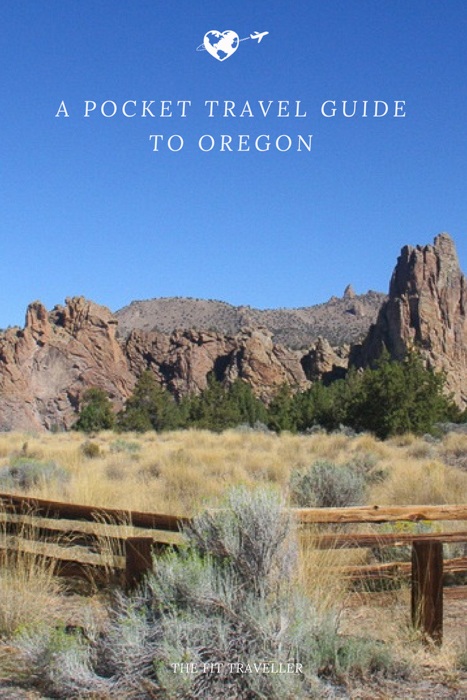