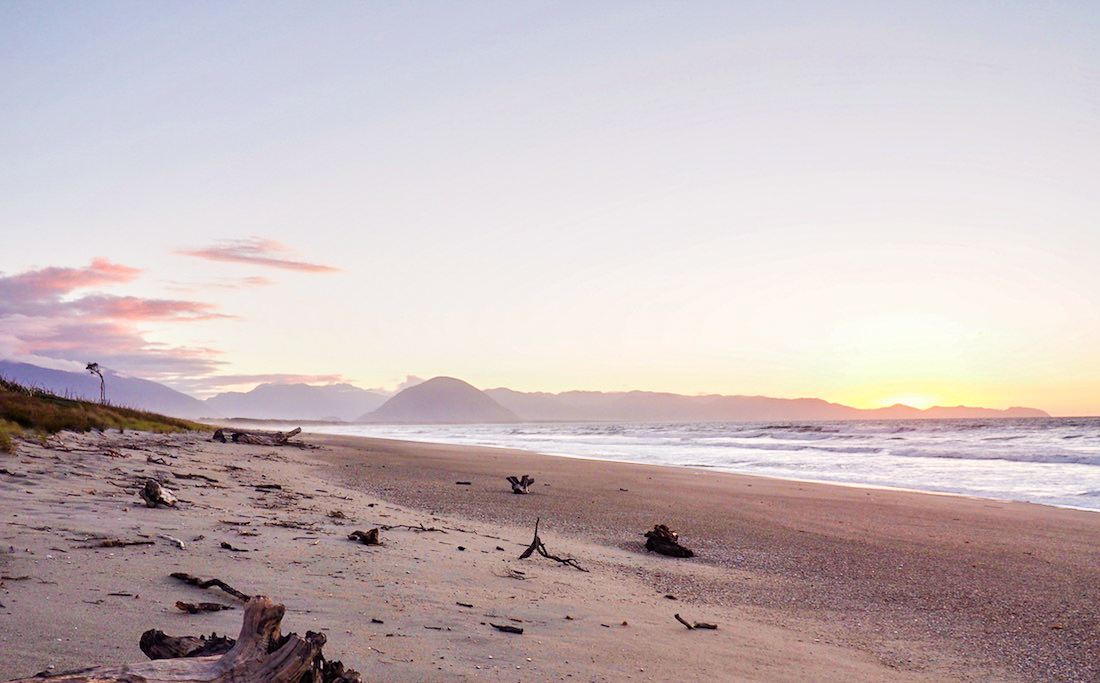 The ever-shifting geography on the South Island of New Zealand makes it one of the most spectacular places in the world for nature lovers. In a day’s drive, you can encounter mountains, plains, fiords, alpine lakes, and glaciers, and while you won’t need to pack your bikini for them, the South Island also boasts some beautiful and unique beaches along its East and West Coasts. We have rounded up four of the best beaches in New Zealand. These are our favourites that you won’t want to miss on your South Island tour. 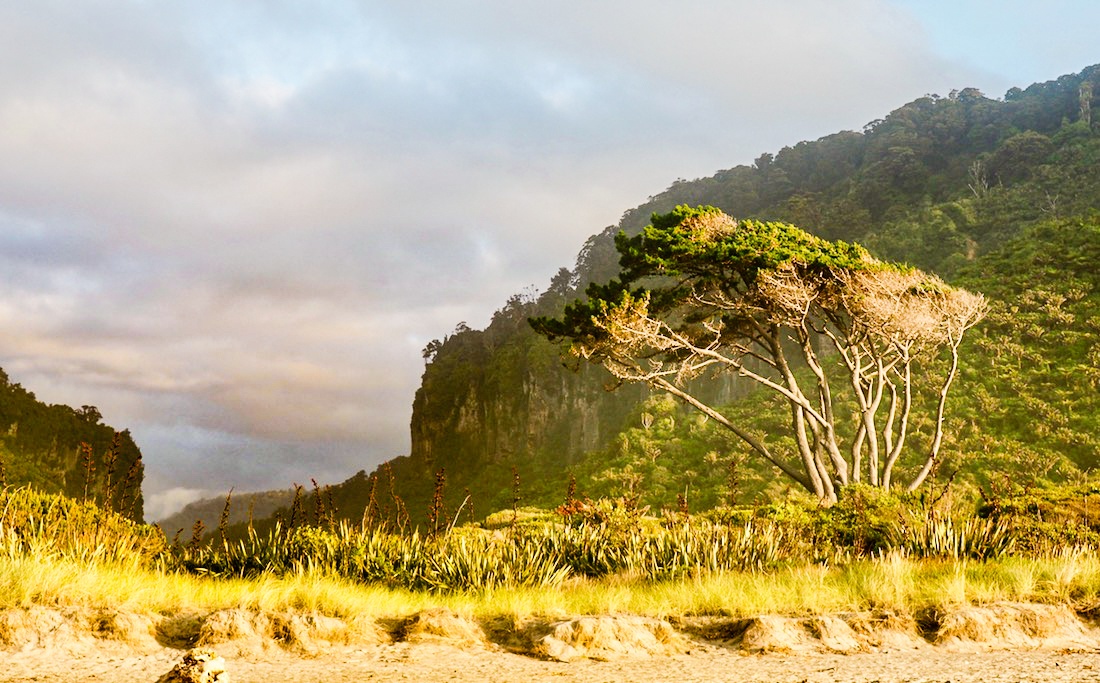 On the way from Abel Tasman National Park to the famous Franz Josef and Fox Glaciers, Punakaiki Beach is one of the South Island beaches often skipped by most tourists, in favour of the more popular Hokitika. But, if you are looking for a quieter stop with plenty of active options to partake in, this beach would be our choice.

Well known for its pancake rocks (limestone cliffs carved by the ocean’s waters to resemble layered pancakes) and roaring blowholes, it also offers several half-day hikes through coastal forests leading to ocean views or limestone caves. Catching a west coast sunset is also a must-do on your visit, so save some time for an easy stroll along the main beach during the magical golden hour.

Also along the West Coast, this tiny fishing village is often overlooked by most as they head inland towards Aspiring National Park. But,  if you keep heading south just an hour past Haast, you’ll be rewarded with a stunning combination of that wild west coast scenery with a stunning Southern Alps backdrop (captured in the cover image).

Once in Jackson Bay make a lunchtime stop at The Craypot, a tiny caravan right on the waterfront, where you can sample fresh fish and chips or whitebait, a local New Zealand favourite. During various times of the year, you might also be lucky enough to spot Fiordland Crested Penguins, Hector Dolphins and Fur Seals.

If fishing interests you, the area is also one of the best places for hooking tuna and you can even try your hand at diving for local Paua (abalone) right off the coast.

A word of caution, the west coast is notorious for the pesky sand fly, so you’ll want to stay covered and bring plenty of sandfly repellent with you.

Related: 5 of the Best Hikes Near Wanaka 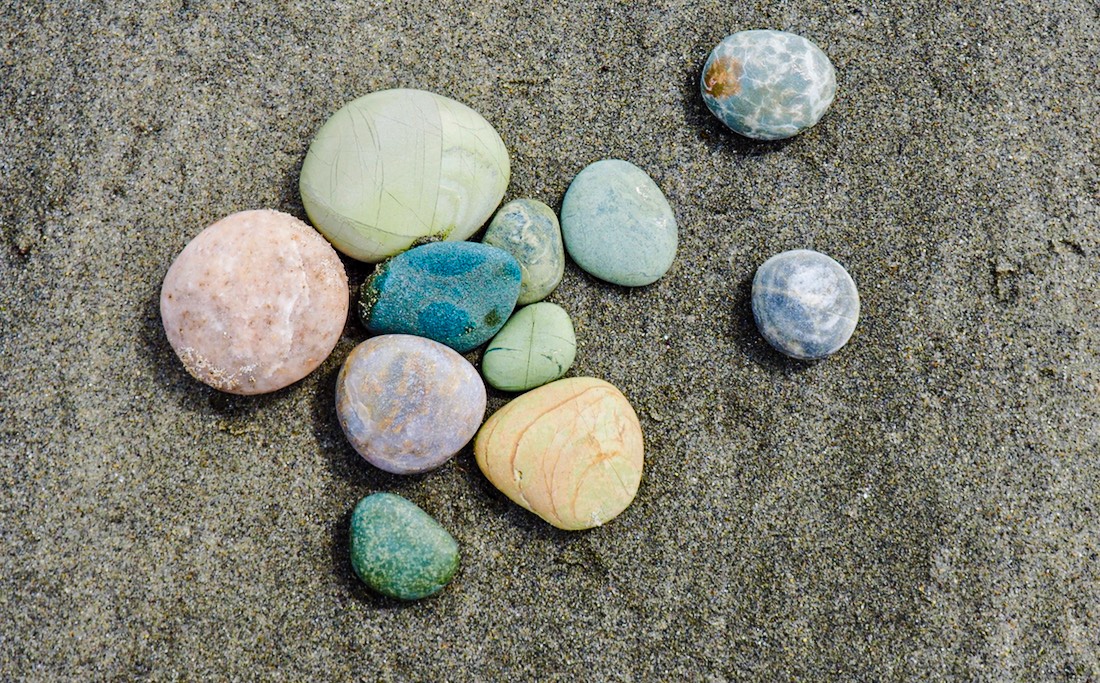 While I didn’t find any semi-precious stones, this colourful assortment of stones still made for a beautiful stroll along gemstone beach. Image © Brittany Lillegard

This quiet beach along the Southern part of the island is located between Fiordland and Invercargill, and while you’ll find thousands of colourful stones, semi-precious stones such as garnet and if you’re lucky, sapphires, you won’t find many people.

Aside from the colourful, washed up stones, the area is also surrounded by beautiful stratified and crumbling coastal cliffs with views of the Fiordland in the distance.

Gemstone beach is best appreciated with a picnic and a famous New Zealand pinot. So, don’t forget to pick up supplies in Riverton, the closest town to this tucked-away gem. 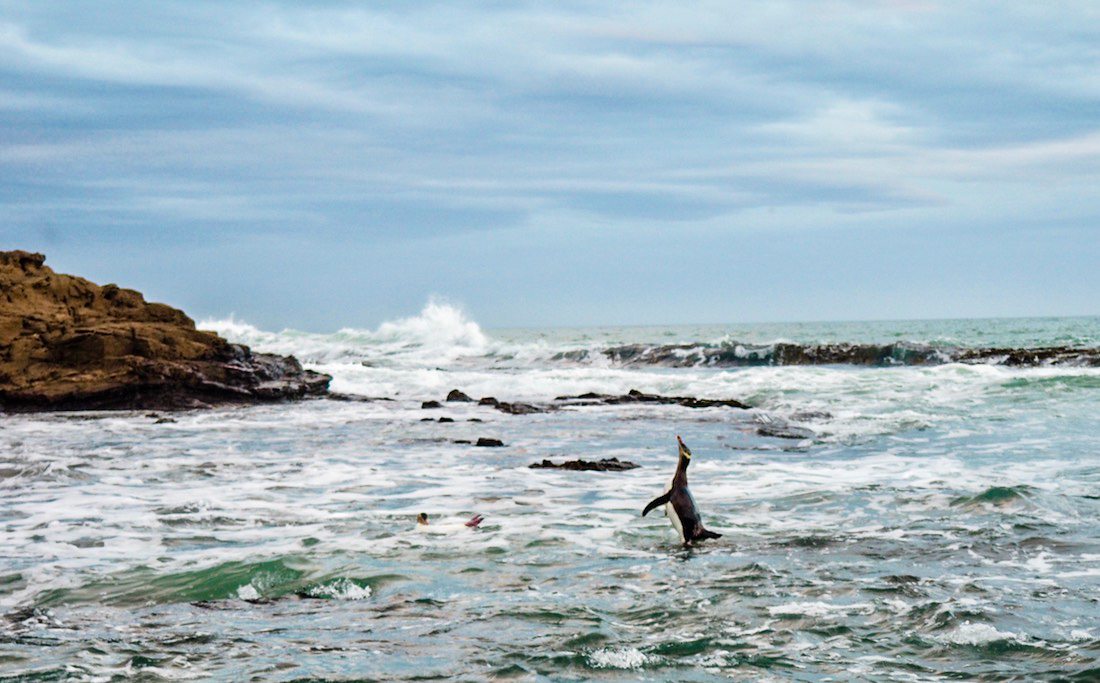 Yellow-Eyed Penguins coming out at dusk at the Petrified Forest, located in the Catlins. Image © Brittany Lillegard

This might be the most well-known beach on the list and known as one of the best beaches in New Zealand. But, it’s popular for a reason.

Located in the Catlins on the Southeast tip of the island, you’ll find unique wildlife, a range of easy to challenging hikes, heaps of waterfalls, some of the island’s best surf breaks, and picturesque lighthouses.

During the summer, you’ll spot rare Yellow-Eyed penguins at both dusk and dawn on a part of the beach that is equally as unique as the wildlife as it happens to contain a petrified forest.

The bay is also home to a pod of Hector dolphins, a small and rare breed of dolphins known for their playfulness and curiosity.

Take in a surfing lesson on the bay and they might just join in on the fun. Once you’ve gotten your fill of swimming with dolphins, penguin spotting, and whale watching, don’t miss a stop at Slope Point. It’s the most Southern point on the South Island, where you’ll be rewarded with stunning cliffside views and a straight line to the South Pole. 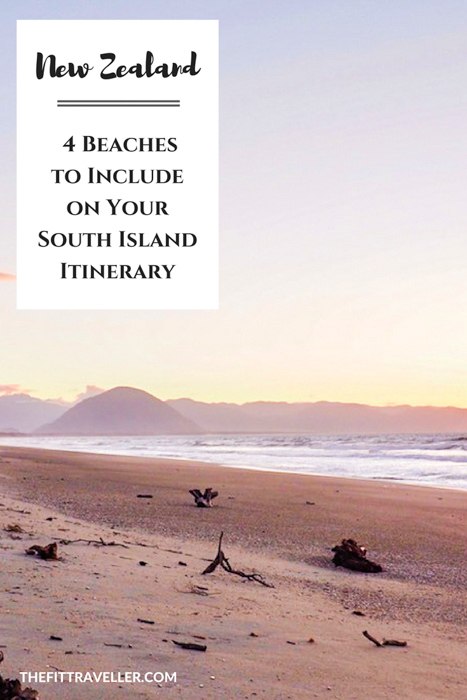 Brittany is a travelling strength coach and yoga instructor from Chicago. She is the founder of Wild Woman Strong, where she fuses her travel stories with her coaching background to help inspire and empower women to get comfortable being uncomfortable, and to take charge of creating their own adventures.

She thrives off of coffee and wine, prefers to spend her days barefoot, and when she isn’t coaching or working on her handstand skills, she can be found plotting her next adventure.