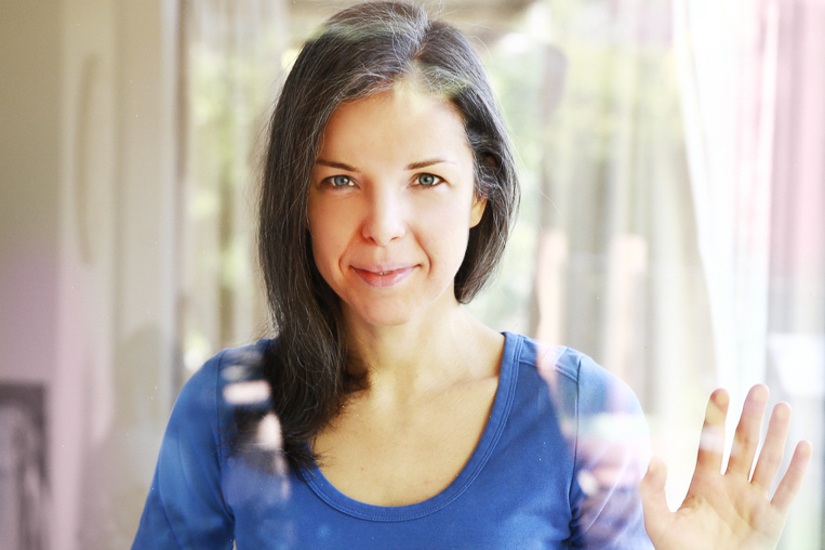 Amelia Hill’s story would be the perfect plot for a Hollywood blockbuster but for the 38-year-old, it’s shockingly real. Imagine spending almost every waking minute confined to a single room, unwell and untouchable. Well, that’s been Amelia’s reality for the past five years. Amelia shares her story of life behind the glass. Image © Amelia Hill

Amelia was just 14 when she began feeling sick; “I started having all sorts of pretty disabling symptoms. No one really knew what was causing them.” she explains. Initially, doctors believed she had Chronic Fatigue Syndrome or a post viral illness. Amelia was encouraged to rest until it passed. But the spectrum of her symptoms increased, as did the attempts to pinpoint what was making her so incredibly ill. At the age of 33, the rising fashion designer’s life was shattered. Her body had given out; “Food, dust, clothes, smells, sounds, mould, my bed, the shower, the TV, my books, nutritious supplements, even people. My body was rejecting the world” she writes on her blog. Those days were terrifying. “You’re in 24 survival mode. You can’t describe it unless you’re in it. There’s a lot of fear and stress all the time. For a long time, I couldn’t be online at all, at that time my electrical sensitivities was so bad, so it was just me 24 hours a day; I had no visitors, nothing. I couldn’t use a laptop or a computer or anything. Without that little bit of contact, life gets very, very small.” she explains as we talk on the phone.

After years of misdiagnoses, countless doses of medication and near death, Amelia was the one to discover what had caused her health to collapse, thanks to an episode of the The Bachelorette. One of the contestants was sharing their story of Multiple Chemical Sensitivity Syndrome. As they described their symptoms, Amelia hung on every word. Finally she had an answer…“It was like having all these missing pieces. All of a sudden you have this fact. Everything makes sense so that felt good in one respect. It was a real revelation to be honest”.

Amelia has since been diagnosed with Environmental Illness/Multiple Chemical Sensitivity (EI/MCS), Chronic Fatigue Syndrome (CFS) and ElectroHyperSensitivity (EHS). It’s a mouthful to say and much more to manage for someone living with any, let alone all of the illnesses. Still unsure of what could have triggered such overwhelming sensitivity to the modern chemical saturated world, Amelia says it could have been a pesticide sprayed in or near her house, but it remains a mystery. Whatever the cause, the effect has been absolutely devastating to both Amelia and her family.

Everything in Amelia’s environment can take its toll on her body. From everyday personal or household chemicals like deodorant and perfumes to paint, dust, furniture, mattresses, blankets. The list is endless. I ask Amelia to describe what happens physically when her symptoms flare up. She says she gets ”swelling of the airways..weakness all over; I literally cannot get air in and out. I’m incredibly weak, generally feeling incredibly toxic. It can just come on in minutes.”

Food is also a potential trigger. Amelia used to grow her own wheatgrass, she favoured fresh, healthy food and lectured on superfoods. Sadly now, she’s limited to a specialised rotation diet. I asked her whether she ever feels satisfied or full, “I feel like my body’s starving most of the time but the goal is consuming calories to stay alive and stay functioning”…”Your body calls the shots, so you just have to listen and work together to move forward.” So what does she crave? A piece of fruit or a handful of cashews. It’s the simple pleasures. Amelia inspires with her bravery and determination to reclaim her health. Image © Amelia Hill

Amelia now lives in a single ‘safe room’ in her parents’ house. The furniture has been removed, there are wooden floors, a fold out bed, a shelf and a couple of metal chairs. The room lacks anything to remind the former fashion star of the life she was forced to leave behind. It “strips off everything from my past, my passions, my hobbies” she says. Amelia has a bit more access to the outside world these days. That’s a precious commodity; “I can watch a little bit of TV, I can tolerate the phone a bit. I can jump online sometimes.” she explains.

I learn quickly while chatting to Amelia, that instead of falling into the depths of the disease that had consumed her body almost overnight, her mind is leading the battle to reclaim her health and her life. “I’m a totally different person to the way I was before. I don’t think you can face a game changing experience without it changing you. There’s no greater experience than a health crisis to cause you to question everything. For a long time I felt broken.”…“For me it was a decision. Was this going to break me or make me? I was going to decide to get well. For me it was a choice. When I made that choice everything was different.”

Talking to Amelia on the phone was like chatting to one of my girlfriends. She’s intelligent, interesting, funny and she knows more about the wellness space than most people I have ever met. For Amelia too, these moments are a welcome connection to the outside world her body rejects. She’s working to recapture other milestone moments of ‘normality’, one at a time. This year, Amelia planned a few special birthday milestones; “I hugged a friend for the first time in several years. It was pretty overwhelming. You miss out on hugs…that’s probably the biggest, most destructive part (of the disease).” Other milestones included a drive down her street in the car, and since we spoke, a trip to the local supermarket car park just to observe the outside world: “Just seeing the world, seeing trees and houses and when everything is stripped away you learn what real gratitude is like..Your level of appreciation skyrockets.”

Now, Amelia’s focus is firmly on getting well again, “Many people would say I’m in the no hope basket. But I just won’t believe that. So everyday I’m very focused on that. Eventually I will find my way”. And what is the inspirational Amelia Hill’s message for others? “Whatever obstacles you’re facing, you’re stronger than you realise..don’t give up!”

Be inspired and read more about Amelia on her blog.