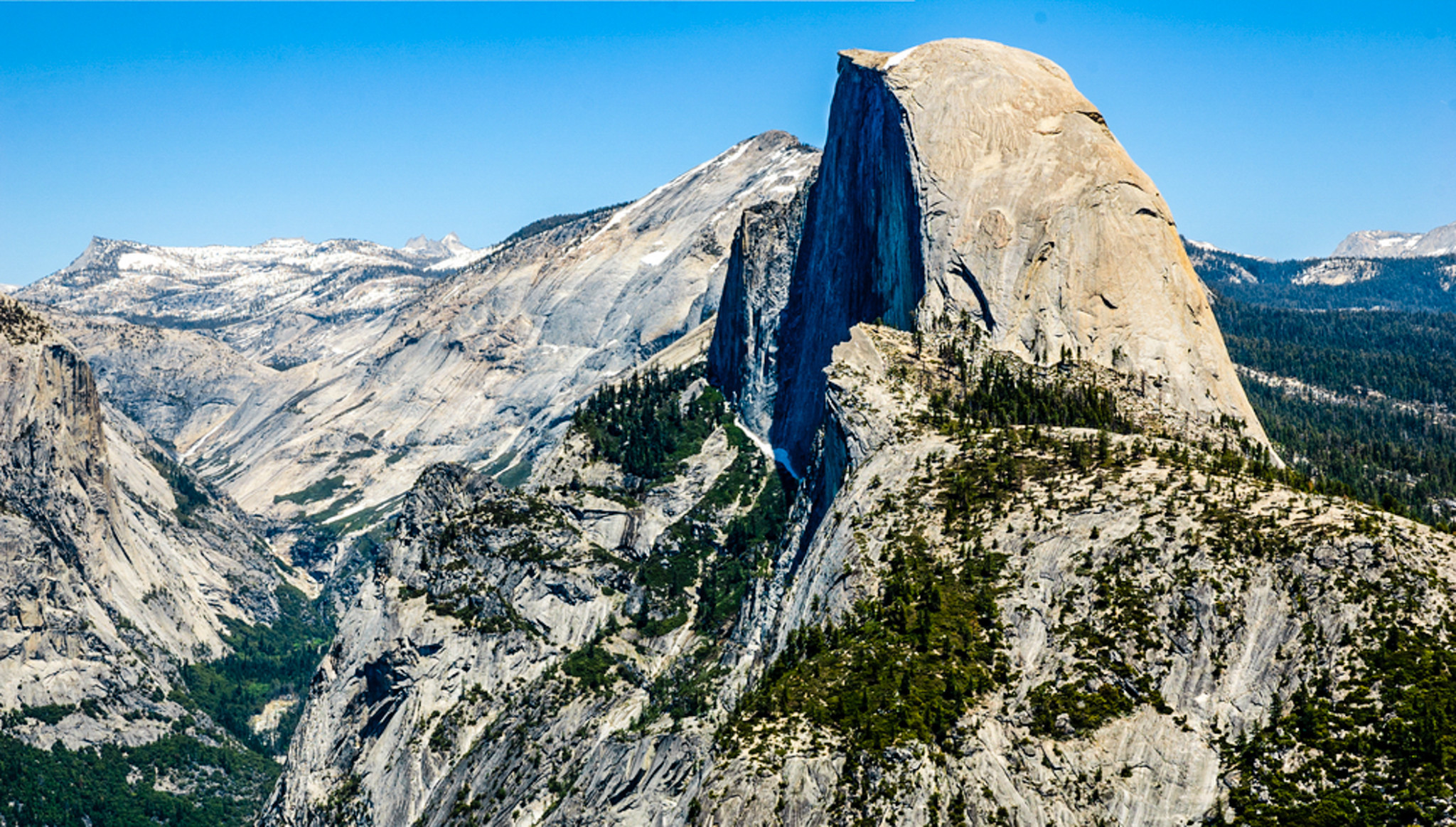 It was dark. I mean really dark. The kind of dark you only get hundreds of kilometres from civilisation. Sitting on a stump outside my tent at 4am, I squinted to focus. I hooked my shoelaces into the non-slip hooks of my hiking boots and pulled them tight around my ankles. Today, I would need all the support I could get to climb the iconic Half Dome in Yosemite National Park. 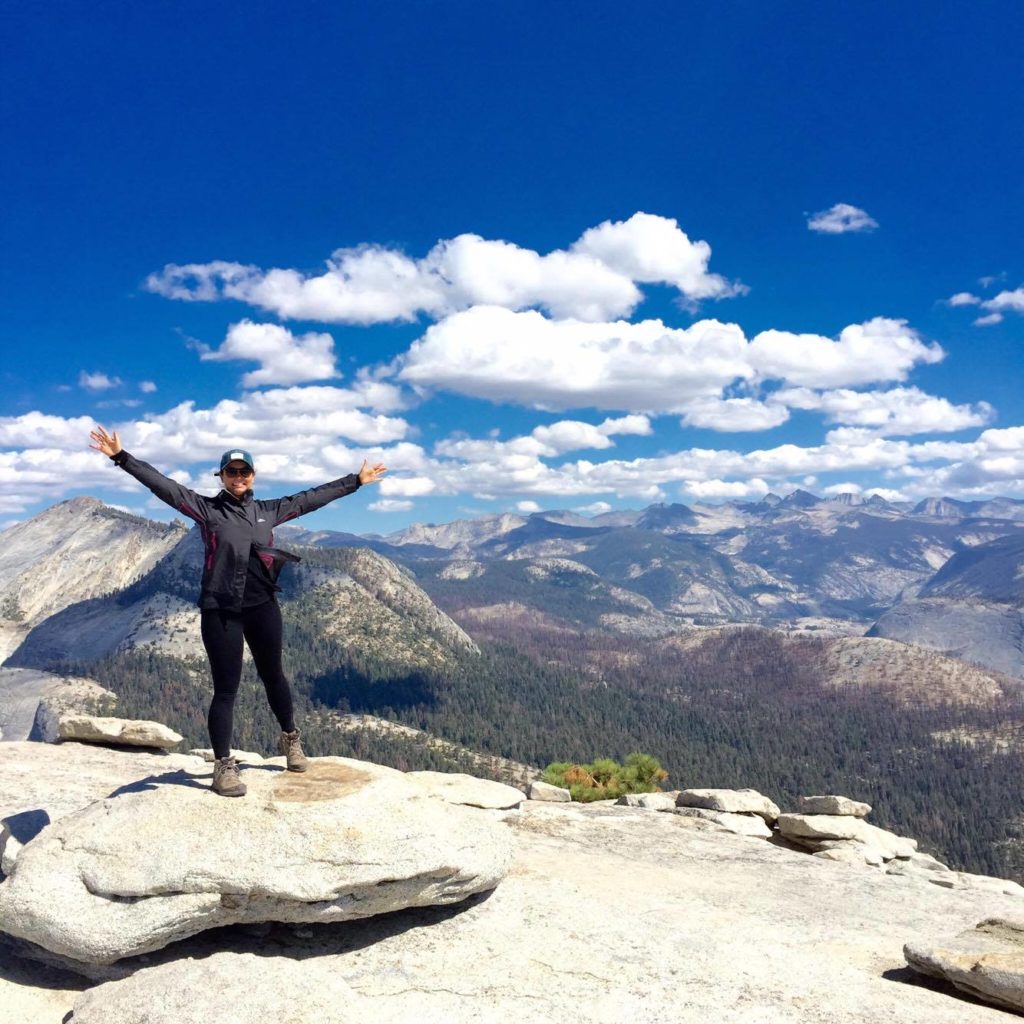 I had come to Yosemite National Park in California to climb the Half Dome rock. Thirty kilometres, at an elevation of 2695 metres. I am no stranger to outdoor adventure. It’s in my DNA. In childhood, my parents had replaced religion with recreation, and I worship the great outdoors. I have done it all; kayaking rivers, backpacking deserts, trekking rainforests, camping in canyons. But nothing like this.

Today, I would drive my body relentlessly uphill for hours on end. Then, just when my legs could barely hold, I would clutch at cables and pull myself onto a rock so high, so huge, so splendid, that it could be seen from hundreds of kilometres away.

Switching on our headlamps, my hiking buddy and I picked our way through the campground, our eyes still struggling to adjust to the darkness. Our hiking packs were locked and loaded. Three meals – tick. Medical supplies – tick. Litres of water – tick. Clothing for all conditions. 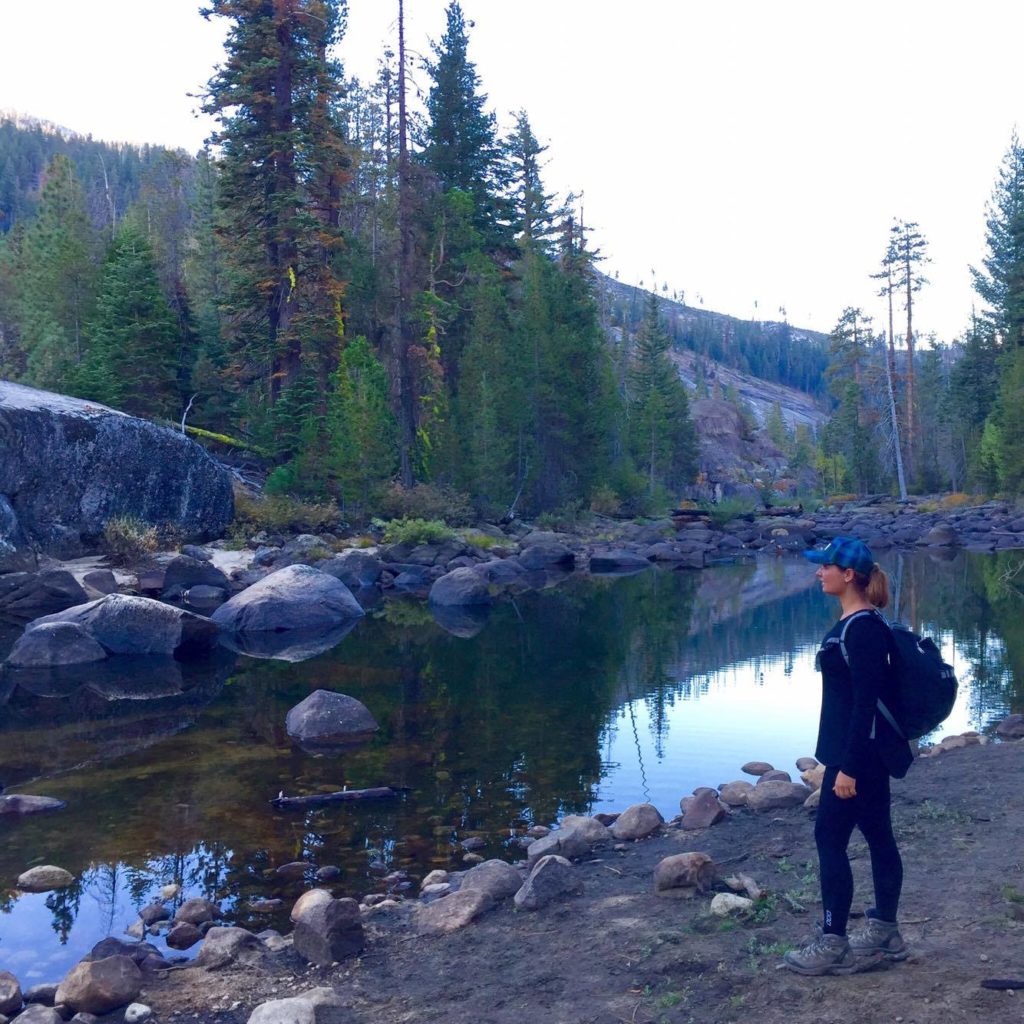 A well-earned moment for reflection during the hike up to Half Dome in Yosemite National Park. Image © Gabrielle Boyle

The first few kilometres were simple, a virtual Sunday stroll. In the darkness, other senses are heightened, and the pungent smell of pine-trees bit at our nostrils. It was cool and clear and pleasingly serene. But this didn’t last long, rounding the track to the first waterfall, the climb commenced and the burn began. For the next six hours my legs would throb and ache, pleading to be rested. The sun had risen to reveal a landscape spectacular beyond measure. Mountains that climbed into the clouds. Valleys that swallowed trees, rivers and roads. The scale of the landscape was surreal.

Hour after hour we climbed. We stopped for water. We stopped to scoff handfuls of Skittles. We stopped to take occasional photos. But mostly we kept climbing. Stair after sodding stair. I would like to say it felt invigorating, and it did, a little. But mostly it just felt bloody painful. My hiking partner is far more fit than me, ripped from relentless hours at the gym, yet still he found the climb hard. 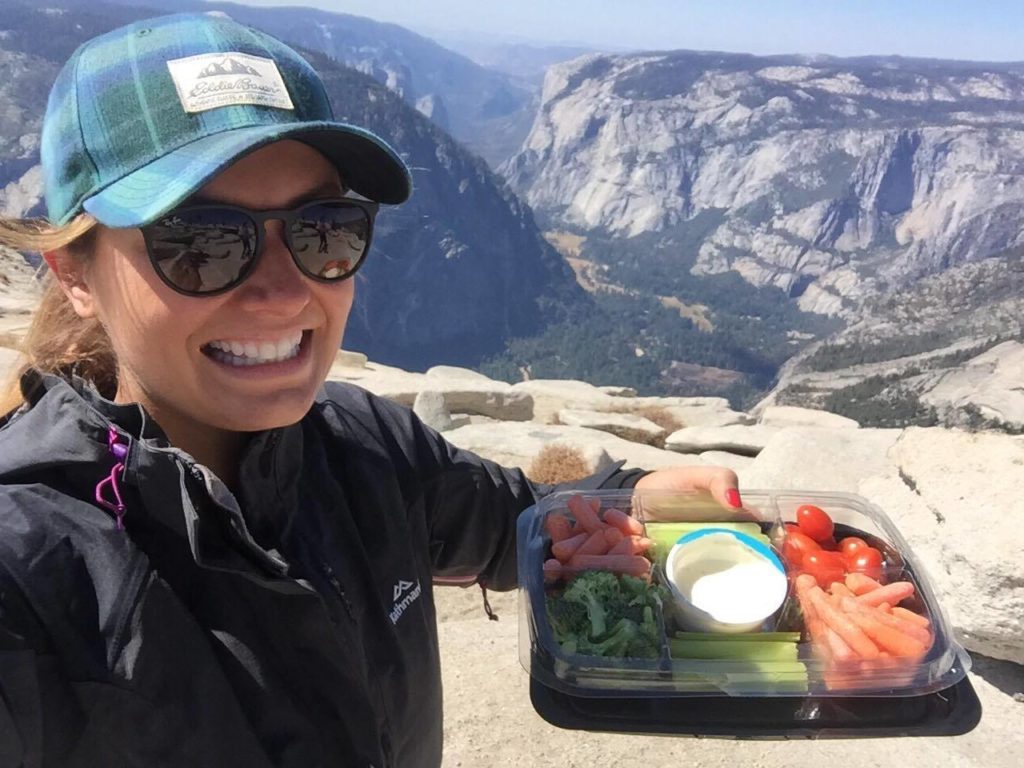 As we wound up those burning bush tracks, we made friends. The father and daughter duo, the older couple constantly stopping for refreshments, the lone-man clutching a teddy-bear & making a pilgrimage to farewell his lost love. Everyone had a reason to climb. Something inside powering them onward and upward.

Six sweaty hours later, and we reached what’s known as The Sub-Dome. The rock before the real rock. The starting point for the wire-climb. We stood and looked up, our necks craning to take in the angle. Two thick wire cables arched their way over a rock-face so steep that wooden footings had been bolted to the granite to prevent climbers from slipping to their death.

We rummaged through our bags, finding the rubber-grip gloves we had purchased at a hardware store days earlier after reading about them online. Slipping them over our sweaty hands we smiled and started forward. We had already done the hard part after all. The cables were just the finishing act right?! We had the summit firmly in our sights. 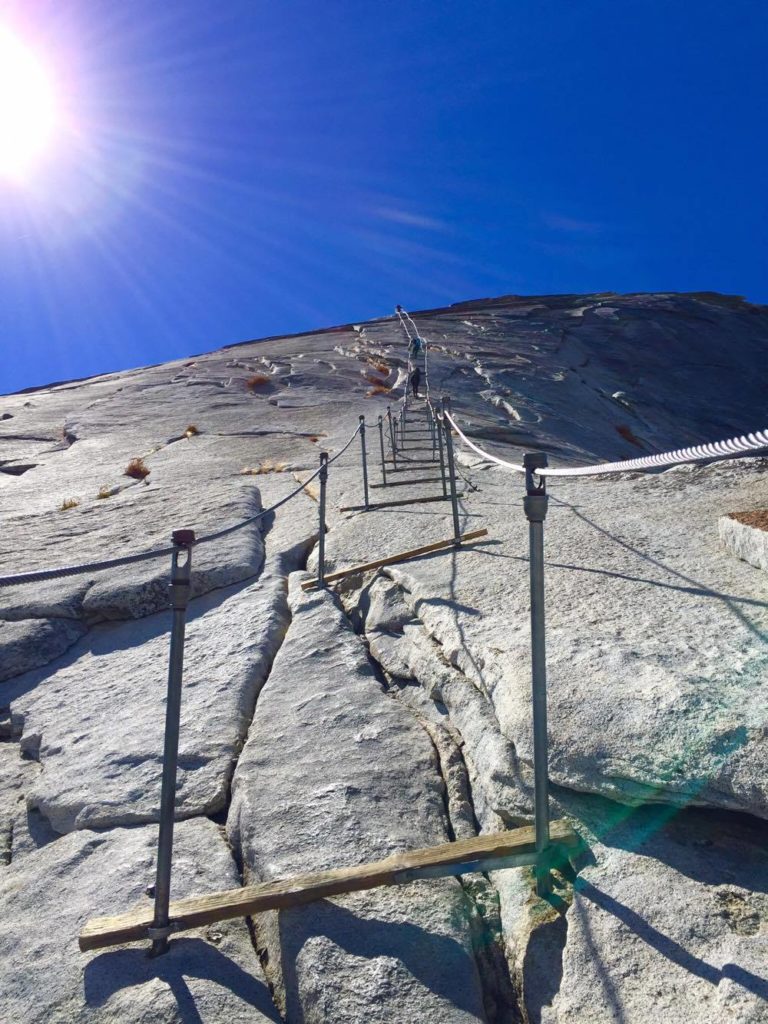 The legendary Half Dome cables can defeat even the most experienced climbers. Image © Gabrielle Boyle

Throwing ourselves forward, we clutched at the cables. The sheerness of the climb was instantly obvious. Just two flimsy cables preventing climbers from what would be a catastrophic fall. But just as the Internet blogs had warned us, “the cables will make or break you.” It took approximately three metres for them to “break” us. Just a few steps in, we lost our nerve & both turned around.

We had come all this way, but could we actually do this?

For half an hour we sat at the base of those wires, and watched others. We watched experienced adventurers struggle with their fear of falling. We watched bucket-list trekkers tremble as they took each step, and we watched fitness freaks refuse to even try. They turned around and headed home, happy not to complete the cables.

Once again we pulled on those clammy rubber gloves and began to climb. Straight up we went. Every step was carefully choreographed. One slip couple spell disaster. We pulled ourselves up, hands pulsating with pressure, legs giddy but buoyed by adrenalin. Higher and higher we climbed, taking turns to call out encouraging messages to each other. “You’re doing so well, you’re half way there already”, and “Amazing work, so close now, just imagine the view when we reach the top.” Through gritted teeth I also spoke to myself “You can do this Gabe. Don’t let this bullshit rock beat you.” 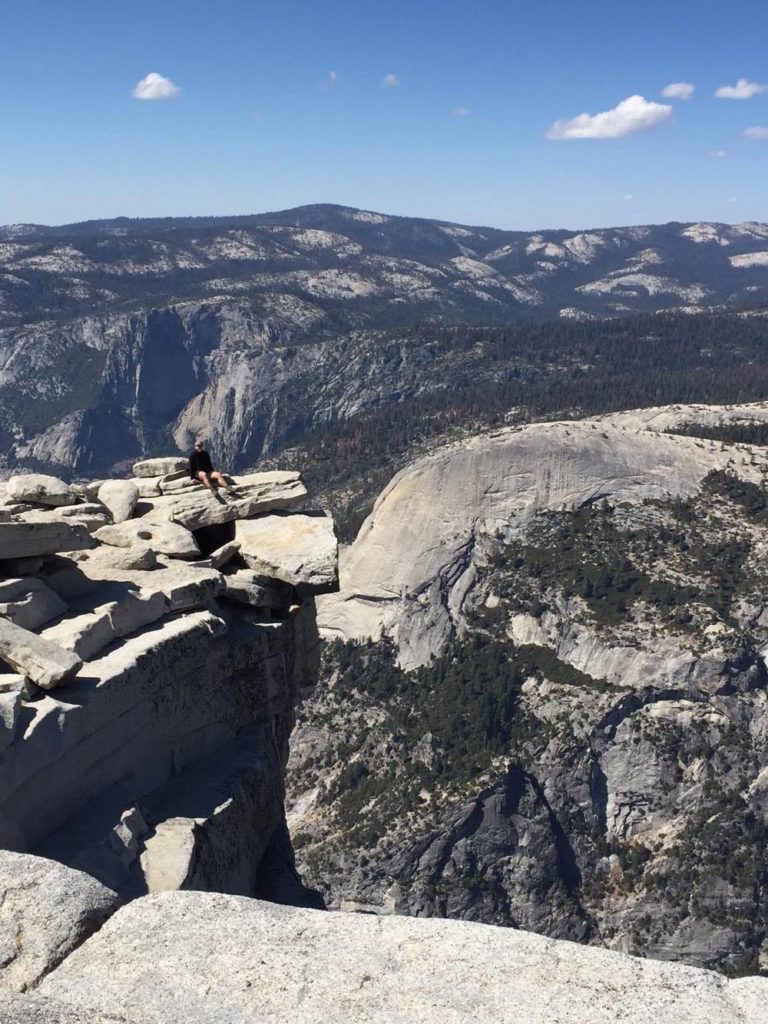 Forty-five minutes later, and I reached the summit. I pulled myself over the last mound, completely depleted. This climb was single hardest thing I have ever done. The height was nauseating. But the view, oh that view. A panorama so wondrous I found myself repeating “holy-shit” under my breath. I sat at the top and ate a salami sandwich and laughed. I knew I had just achieved something awesome.

As we sat and ate, we watched a man get down on one knee and propose. She said yes, tears streaming down her face. He slipped on the ring, and everyone cheered. Wolf-whistles and applause rang out over the valley. We cheered because they were engaged. We cheered because we had all made it to the top of a ridiculously high rock.

I know my climb was no Everest. I am no super-woman. I am not the fastest, the most fit or the most flexible. But what I now understand is that fitness is more than cardio health. Toned muscles don’t count for much if you don’t have the ticker to try. True fitness is a state-of-mind, an attitude, a way of being. It was then that I realised, the most powerful muscle in my body is my brain. With a fit mind, I know anything is possible. 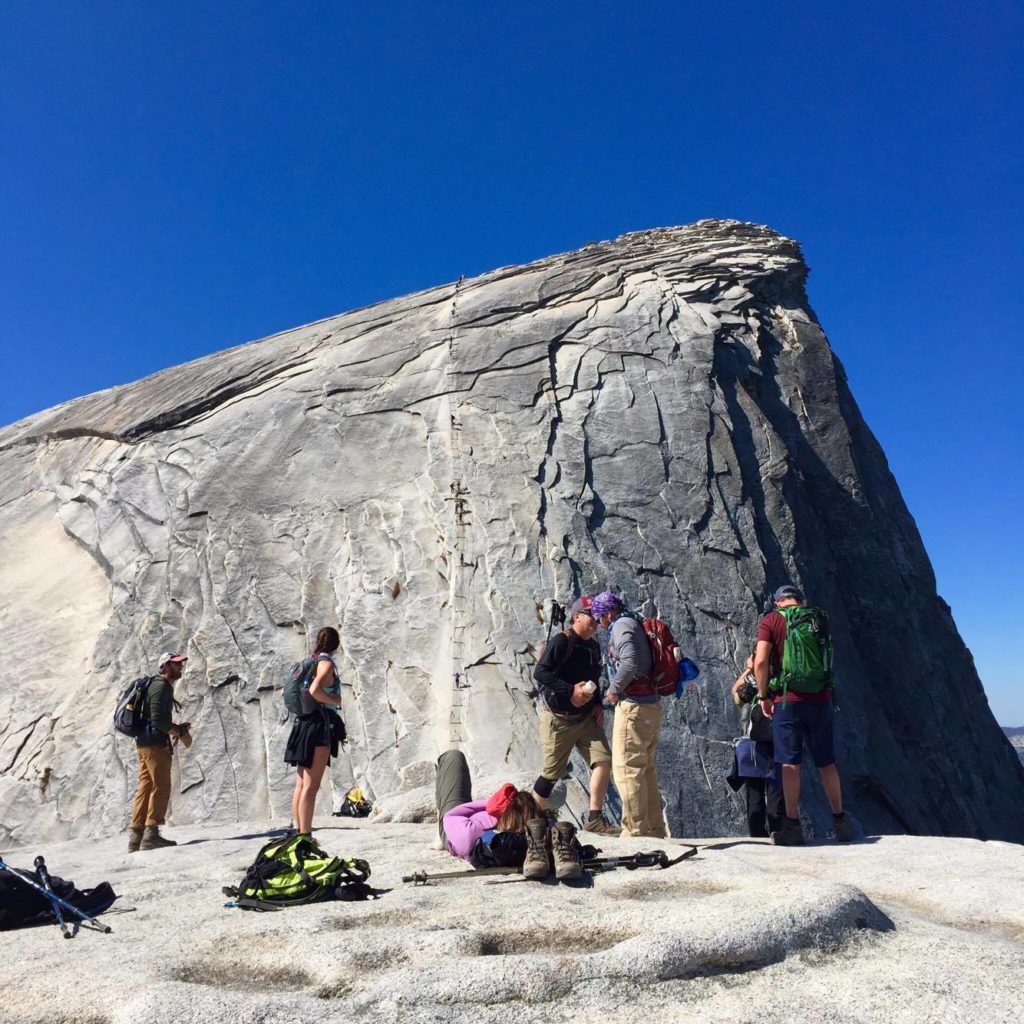 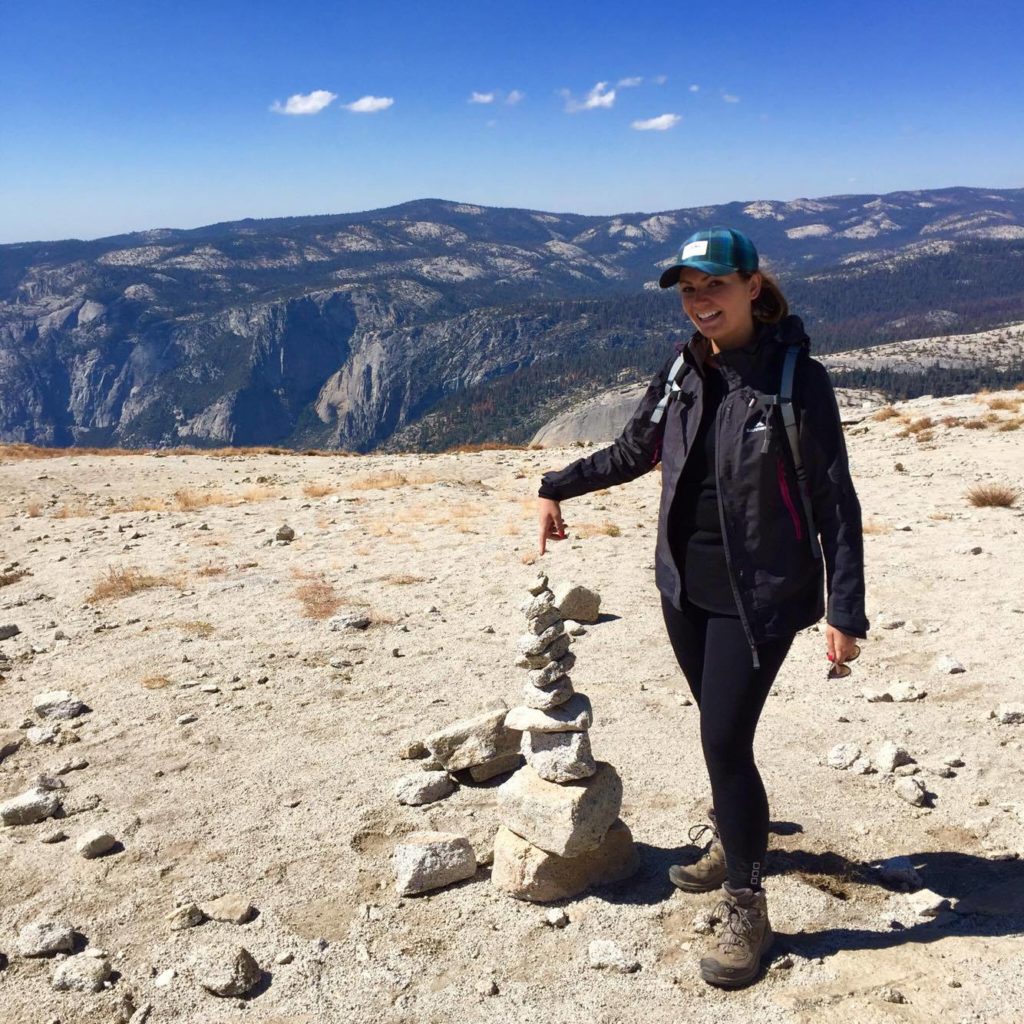 Proud moment:Gabrielle adds to the Cairn on Half Dome in Yosemite National Park. Image © Gabrielle Boyle

Are you ready for Yosemite’s Half Dome?

What you will Need

Where to Stay in Yosemite 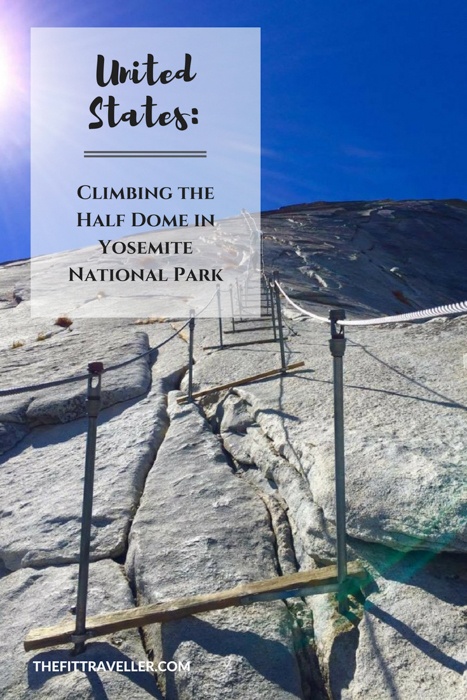 Gabrielle Boyle is a reporter for Nine News Australia, based in Sydney. With fifteen years experience in television reporting and presenting, Gabrielle specialises in breaking news, and thrives on the adrenalin which comes with covering breaking national and international news.
In her spare time, you will find her enjoying the great outdoors, whether it be bushwalking in the Blue Mountains, kayaking on Sydney Harbour or camping out in the Royal National Park.
Follow Gabrielle’s off-camera adventures on Instagram or Twitter.

« The Samata Sanur, Bali
Costa Dulce Nicaragua: A Nature and Yoga Retreat on the Pacific Coast »